Gold spiked higher in many price feeds overnight and was $270 higher or more than 22% higher to $1,467.50/oz at one stage in what appears to have been some form of computer glitch.

There was speculation that the price spike which came while the COMEX was closed for 30 minutes was due to a series of charting errors or misprints, a bad price feed or a computer glitch. Another example of how technology is a great enabler but can also be a great disabler.

Despite a very bullish backdrop of the Swiss gold referendum on Sunday, gold repatriation movements in Europe, Russian central bank gold buying and very robust Indian and Chinese demand, there was no breaking news that would justify such a dramatic uptick in gold.

The “usual suspects” were a fat finger trade by a large hedge fund or bank. This was quickly discounted as the price moved higher in a series of trades over a period of minutes rather than in one or two trades. 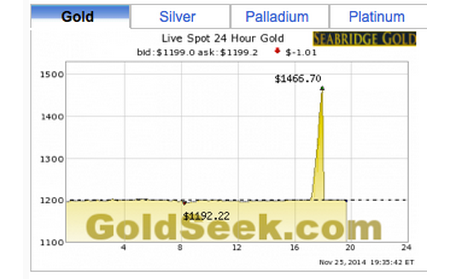 A classic example of this was the huge fat finger trade that brought Knight Securities to their knees. In 2012, US market-maker Knight Capital Group almost went bankrupt after it lost more than $450 million when its computers made erroneous orders that couldn't be undone. The firm was later sold.

Another example of this was last month, when Japan's stock markets crashed after a trading error caused more than $600 billion or £370 billion, (yes billion!) worth of orders to be made and then cancelled. An anonymous broker entered an over-the-counter trade for 42 ‘blue chip’ stocks before swiftly cancelling it.

Of note was the fact that silver and the other precious metals did not see any movement despite the apparent surge in gold. Nor did other markets.

We had concerned clients on the phone early this morning wondering if a massive short squeeze had begun. Others wondered whether price manipulation was at play. Understandable concerns given events of recent weeks and months and the increasing lack of trust in large market participants and indeed in financial markets.

Having looked at it and spoke to data providers we believe that this may have been a computer glitch. It was not manipulation, a short squeeze, or a modern Chinese or Russian ‘Goldfinger’ sending a pointed message to Washington.

The problem may be related to one of the exchange's trading engines. Although the systematic nature of the price moves higher did suggest that there was a degree of coordination and an intelligence behind the price move higher.
This is not the first time that something like this has happened. The CME halted trading for some futures contracts for more than 90 minutes on April 8 this year due to “technical issues.”

The nature of the “technical issues” were not disclosed.

Such “glitches,” if indeed there are glitches, are becoming more frequent and larger in size and pose real risks to investors. It underlines the importance of owning physical gold and avoiding paper gold - especially leveraged paper and electronic gold which can be manipulated and subject to such errors.

It is also shows, financial markets are increasingly subject to technological vulnerability.

Intelligence agencies, governments and internet security experts have warned that a cyber war could see hackers, attempt to disable and take down financial markets and exchanges in a new form of warfare - financial warfare.

Security experts say China, Russia, the U.S. and other states are adept at and becoming more sophisticated at cyber espionage, cyber warfare and financial warfare.

There is no speculation that this latest glitch was cyber terrorism or war. However, it underlines the risk posed to financial markets and hence the importance of owning physical bullion coins and bars.

Currency wars are set to deepen as central banks continue to attempt to weaken their currencies.

The ECB is talking about possibly beginning to buy sovereign bonds in early 2015. This is putting pressure on the euro and strengthening the U.S. dollar against the euro. While the BOE continues its extensive QE programme and the BOJ has embarked on a massive QE programme.

China's net gold imports from Hong Kong reached a seven-month high in October, according to official Hong Kong data released yesterday. Shanghai Gold Exchange (SGE) premiums are running at $1 to $2 due to demand from buyers in Asia.

Bloomberg noted that gold-backed  exchange-traded products (ETPs) dropped 1.1 metric tons to 1,616.7 tons as of yesterday, falling for the first time in three sessions and are approaching a five-year low. Weak hand, sentiment driven ETF owners are selling to allocate to equities and some ETF owners are opting for the safety of physical gold.

Gold has been rallying in November to date, advancing over 2%. We are surprised that it is not higher given the backdrop of the Swiss gold referendum, the gold repatriation movements and Russian, Indian and Chinese gold demand.

Smart money is accumulating bullion now in anticipation of higher prices in 2015 and in the coming years.