What Can Hong Kong And Cuba Teach Us About Economic Policy?

Early this year, I shared an amusing but accurate image that showed an important difference between capitalism and socialism.

And in 2012, I posted a comparison of Detroit and Hiroshima to illustrate the damage of big government.

Well, if you combine those concepts, you get this very pointed look at the evolution of Cuban socialism and Hong Kong capitalism.

Some might dismiss these photos as being unrepresentative, and it’s reasonable to be skeptical. After all, I’m sure it would be easy to put together a series of photos that make it seem as if the United States is suffering from decay while France is enjoying a boom.

So let’s go to the data. In previous posts, I’ve shared comparisons of long-run economic performance in market-oriented nations and statist countries. Examples include Chile vs. Argentina vs. Venezuela, North Korea vs. South Korea, Cuba vs. Chile, Ukraine vs. Poland, Hong Kong vs. Argentina, Singapore vs. Jamaica, and the United States vs. Hong Kong and Singapore.

Now let’s add Cuba vs. Hong Kong to the mix. 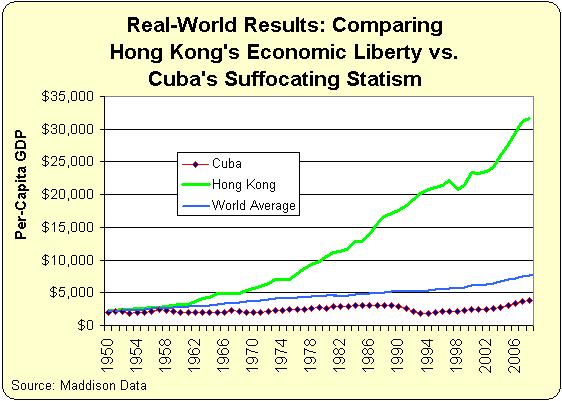 Wow, this is amazing. Through much of the 1950s, Hong Kong and Cuba were economically similar, and both were very close to the world average.

Then Hong Kong became a poster child for capitalism while Cuba became an outpost of Soviet communism. And, as you might expect, the people of Hong Kong prospered.

What about the Cubans? Well, I suppose a leftist could argue that they’re all equally poor and that universal deprivation somehow makes Cuban society better Hong Kong, where not everybody gets rich at the same rate.

But even that would be a lie since Cuba’s communist elite doubtlessly enjoys a very comfortable lifestyle. So while the rest of the country endures hardships such as a toilet paper shortage, the party bosses presumably drink champagne and eat caviar.

The bottom line is that statists still don’t have an acceptable answer for my two-part challenge.

1. Can you name a nation that became rich with statist policies?

Before you say Sweden, or even France, note that I asked you to name a nation that became rich during a period when it followed policies of interventionism and big government. Countries in Western Europe became rich during the 1800s and early 1900s when government was very small.

Indeed, government spending consumed only about 10 percent of economic output in Western Europe prior to World War I and there was almost no redistribution. That’s more libertarian than what you find today in places such as Hong Kong and Singapore.

Speaking of which, what I’m really asking my leftist friends is that they give me the left-wing versions of Hong Kong and Singapore. These jurisdictions were relatively impoverished at the end of World War II, but they are now both very rich by global standards. And libertarians and other advocates of small government and free markets can make a very strong case that good policy played a role in their amazing rise to prosperity.

So where’s the role model for statists? What nation can they put forth as a successful example?

I won’t hold my breath waiting for an accurate answer.

Now for the other part of the challenge.

2. Can you name a nation that with interventionism and big government that is out-performing a similar nation with free markets and small government?

Before you embarrass yourself by asserting that, say, Denmark is richer than Paraguay because of statism, you need to look at the data. Denmark has a bigger welfare state than Paraguay, but it’s much more pro-market in other respects. Indeed, it is ranked #14 in the Economic Freedom of the World, compared to #89 for Paraguay. You’d be more clever to ask why, for example, #42 Belgium is richer than #6 Mauritius.

But this is why I asked for a comparison of similar nations. In other words, find two countries that are, or were, roughly equal in terms of demographics, economic development, resource endowments, and other factors. And then I want an example of a nation with statist policy that has out-performed a nation that instead chose small government and free markets. Or the jurisdictions don’t even need to be that similar. Just show me a statist nation that grows faster, over a meaningful period of time, than a pro-market jurisdiction.

From a libertarian perspective, I can cite lots of examples, such as Chile vs. Argentina vs. Venezuela. Or North Korea vs. South Korea. Or Ukraine vs. Poland. Or Hong Kong vs. Argentina. Or Singapore vs. Jamaica. Or the United States vs. Hong Kong and Singapore. Or even Sweden vs. Greece. I could continue, but I think you get the point.

I will patiently wait for my left-wing friends to provide examples that support their perspective, but cobwebs will form before they fulfill my challenge.

In the meantime, here’s a video that explains the simple recipe that countries should follow if they want to enjoy growth and prosperity.

You’ll notice that the video heavily borrows from Economic Freedom of the World.

That’s no surprise. There’s no better source for making apples-to-apples comparisons to see whether countries are following good policy.

The bad news is that the United States has taken a dive in the wrong direction in these rankings.

When Bill Clinton left office, the United States had the world’s 3rd-freest economy. Today, thanks to years of statism under both Bush and Obama, we’ve dropped to #17.

This Lisa Benson cartoon is a very painful illustration of what’s happening.

America is copying the nations that are in deep trouble because of excessive government.

Which is the same message you find in this Glenn Foden cartoon and this Michael Ramirez cartoon.

But maybe some leftist can answer one or both of the questions above and we can stop worrying about the ever-expanding welfare state.

P.S. If you prefer stories rather than images or data, this updated version of the fable of the ant and the grasshopper makes a key point about incentives and redistribution. And you get a similar message from the PC version of the Little Red Hen.

P.P.S. Cuba’s system is so wretched that even Fidel Castro confessed it is a failure. So maybe there’s hope that Obama will have a similar epiphany about American-style statism!