Who could have possibly thought that after a year as horrible as the one McDonalds just had, when a month ago the company reported its worst US comp store sales in over a decade...

... with the rest of the world not doing much better...

That someone would be finally held accountable, namely the CEO and President, Don Thompson, who joined when the stock was $89 and who just "volunteered" to retire... as the stock closed at $89.

... is British, and clearly wears at least 37 pieces of flair.

From the press release

"Steve is a strong and experienced executive who successfully led our UK and European business units and the Board is confident that he can effectively lead the Company to improved financial and operational performance," said Andrew McKenna, non-executive Chairman of the Board of Directors.

McKenna continued: "On behalf of the Board I sincerely thank Don for his valuable contributions and outstanding service throughout his career at McDonald's. We will be indebted for his passionate leadership, business acumen, dedication and system knowledge."

In announcing his retirement, Thompson said. "It's tough to say goodbye to the McFamily, but there is a time and season for everything. I am truly confident as I pass the reins over to Steve, that he will continue to move our business and brand forward."

"I am grateful to have had the opportunity to work with Don and congratulate him on his remarkable career at McDonald's," said Easterbrook. "I am honored to lead this great brand, and am committed to working with our franchisees, suppliers and employees to drive forward our strategic business priorities to better serve our customers."

Prior to this promotion, Easterbrook was Senior Executive Vice President and Chief Brand Officer, leading McDonald's efforts to elevate its marketing, advance menu innovation, and create an infrastructure for its digital initiatives. An accomplished, McDonald's veteran, Easterbrook previously served in key leadership roles across the company's global business, including president of McDonald's Europe.

As CFO, Ozan will report to Bensen and will be responsible for managing the global financial organization and leading the development and execution of the company's fiscal strategies. Ozan brings broad financial experience and has held senior-level positions in the company's Finance, Investor Relations and Accounting departments with assignments in both the U.S. and European markets.

The McDonald's Board of Directors today elected Bensen and Ozan to their respective positions, which will also be effective March 1.

"McDonald's is an outstanding company with talented employees and these management changes are aimed at speeding the company's movement to its next phase of innovation and growth, said McKenna. "The Board will continue to be actively engaged with the leadership team to drive McDonald's future success throughout this transition."

Activist investors everywhere rejoice as this means a whole lot more robot hamburger flippers are coming to replace millions of minimum wage paying jobs, and the proceeds can used for much more critical purposes, such as McStockbuybacks.

Meet the Robot That Makes 360 Gourmet Burgers Per Hour 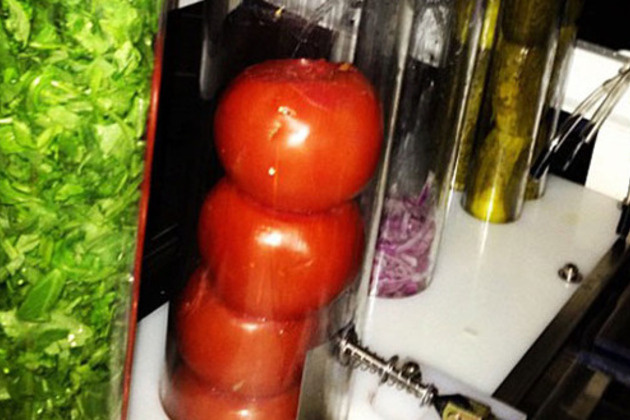 No human hand touched this hamburger. It was made entirely by robots

One robot, rather—a 24 square foot gourmet-hamburger-flipping behemoth built by Momentum Machines. It looks like this: