Caught On Tape: Dijsselbloem To Varoufakis: "You Just Killed The Troika"

Amid 'turmoiling' stock markets on Friday, CNBC's Simon Hobbs summed up the status quo's thinking on the new Greek leadership when he noted, somewhat angrily and shocked, "The Greeks are not even trying to reassure the markets," seeming to have entirely forgotten (and who can blame him in this new normal the world has been force-fed for 6 years) that political leaders are elected for the good of the people (by the people) not for the markets. Yesterday saw the clearest example yet of Europe's anger that the Greeks may choose their own path as opposed to following the EU's non-sovereign leadership's demands when the most uncomfortable moment ever caught on tape - the moment when Eurogroup chief Jeroen Dijsselbloem (he of the "template" foot in mouth disease) stood up at the end of the EU-Greece press conference, awkwardly shook hands with Greece's new finance minister, and whispered..."you have just killed the Troika," to which Varoufakis responded... "wow!"

The joint press conference was concluding, when Greek Finance Minister Yanis Varoufakis droped a last bombshell.  “…and with this if you want – and according to European Parliament – flimsily-constructed committee we have no aim to cooperate. Thank you.” Varoufakis was referring to the famous Troika, the country’s official creditors consisting of the European Union, the International Monetary Fund and the European Central Bank..

After concluding with a “Thank you” Varoufakis gives the word to Eurogroup Chief Jeroen Dijsselbloem, who wants to hear the translation first. Then he takes off the ear phones, he stands up and sets to leave. An enforced-looking shaking of hands delays the  departure of the Dutch FinMin.

Dijsselbloem quickly whispers something to Varoufakis’ ear, he briefly replies back and the Eurogroup chief leaves the press conference hall as soon as it was possible.

The whole afternoon, Greek and international media were trying to find out “What the hell did they two men said to each other!?” 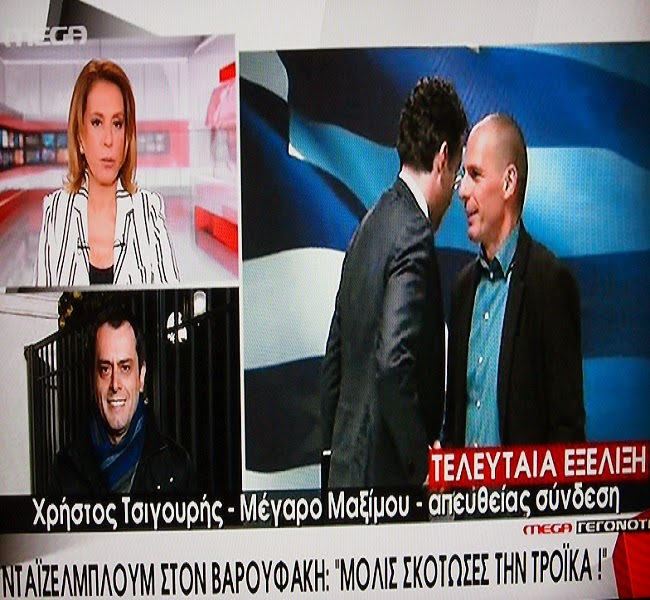 Eurogroup chief whispered to Greek FinMin’s  ear “You just killed the Troika” and that Varoufakis replied with a simple “WOW!”

Dijsselbloom slides his hand away

The two men talk for a couple of minutes with lips hidden from the cameras.

Dijsselbloem leaves without turning back to watch his interlocutor.

I don’t quite understand why Dijsselbloem is sour. I’m sure that Varoufakis told him the same things when they had their 2-hour face-to-face talks.

Unless they were talking about Gouda and Feta and the Greek FinMin surprised him when he said at the press conference, that the Greek government will not negotiate with the Troika.

And furthermore, why is he offended? He is chief of the Eurogroup, he does not represent the Troika…

Most probably he was expecting a Yes-Man behavior like in the past with HOHOHO-jocker Jean-Claude Juncker, when he was Eurogroup head. Later that evening Yanis Varoufakis gave an excellent more in depth interview with BBC's Newsnight... to explain why Greece will not accept more debt from the EU...

One final thought - how long before this chart converges?