"Current Equity Markets Are No Place For Long-Term Investors"

I’ve posted this chart from John Hussman a number of times in the past. It’s an amalgamation of seven different stock market valuation methods that have been historically accurate in assessing whether the stock market is undervalued, fairly valued, or overvalued. These measurements would have told you to buy in 1947, sell in 1965, buy in 1980, sell in 1999, buy in 2009, and sell in 2014. Nominal returns in the market over the next ten years will be less than 1.5% annually. Real returns will be negative. Unless, of course, this time is different. That’s what Wall Street shysters, Ivy League economists, government apparatchiks, and CNBC bimbos and boobs will tell you. Do you believe them, or historical precedent that has proven to be accurate over the last century? 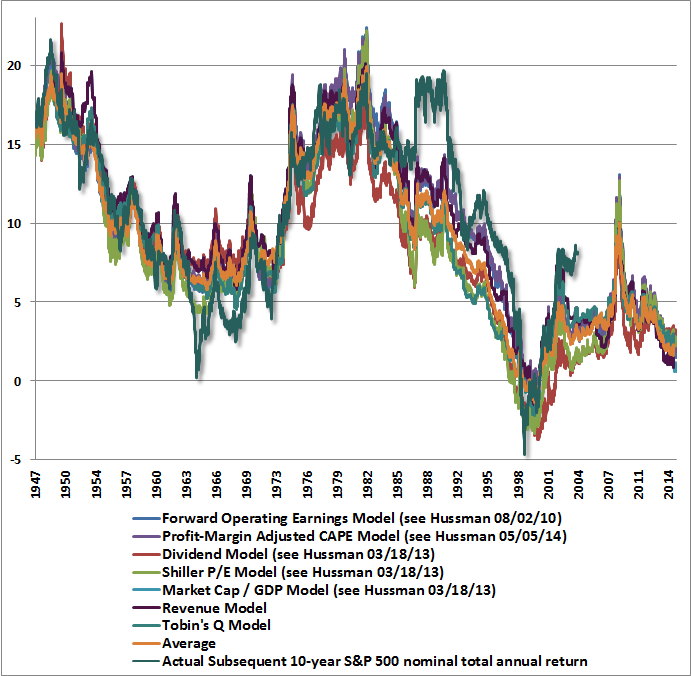 Last week’s advance had the earmarks of a short-squeeze, featuring a low-volume advance to marginal new highs on a number of indices including the S&P 500, on hopes that a Greek bailout and a firming in oil prices will put a floor under global economic deterioration. On factors that affect our estimate of the market return/risk profile, credit spreads remain broadly wider than they were a few months ago, and our primary measures of market internals remain unfavorable. Meanwhile, equity valuations – on the most historically reliable measures we identify – are now fully 117% above their pre-bubble norms, on average. As of Friday, our estimate of prospective 10-year S&P 500 annual nominal total returns has declined to just 1.4%, suggesting that even the dismal 2% yield-to-maturity on 10-year bonds is likely to outperform equities in the decade ahead.

The upshot is that equities are likely to produce total returns close to zero over the coming decade. But they still present something of an “inventory” problem. The basic inventory problem is to accumulate inventory prior to advances in price, to hold that inventory as long as it appreciates in price, and to release that inventory when prices are elevated. What we observe at present is a market where the inventory now fetches record prices and is likely to enjoy little return for long-term holders, and suffer severe losses over the completion of the present cycle. But should short-term demand become even greater, one can’t rule out a move to even higher prices and even more dismal long-term prospective returns – something to be celebrated by those who hold out long enough to sell at that point, but tragic for those who actually buy the inventory in the hope that it will be rewarding over time.

All the big swinging dicks on Wall Street think they are the smartest guys in the room. Of course, all they do is follow computer programs telling them when to buy or sell. It will be very entertaining when they all try to exit at the same time.

Still, there is an even narrower and much more speculative approach to this inventory problem, which is focused on a shorter horizon than the complete cycle, attempts to fully capture returns even in segments of the market cycle that have already reached extreme valuations, and ridicules full-cycle investors who might, in hindsight, miss such opportunities. The typical problem with this approach is that speculators invariably wear out their welcome by holding inventory even after indications of growing investor risk-aversion have emerged. The eventual attempt of speculators to exit a narrow door simultaneously at rich valuations is chronicled in air-pockets, free-falls and crashes across a century of market history.

The skeptics contend Hussman is the boy who cried wolf. Yes he has been warning of a potential crash for the last year. It hasn’t happened. So people ignore his warnings, which are based upon facts, data, and history. He is not wrong. Ignoring the truth doesn’t make it not so. The crash will come in its own due course. It always has and it will this time.

Suffice it to say that current equity markets are no place for long-term investors, and that even a resumption of risk-seeking investor preferences would demand a considerable safety net. For now, we believe the best interpretation of recent market action is as a hopeful, low-volume short-squeeze to marginal new highs, despite early deterioration in market internals following a period of extreme overvalued, overbought, overbullish conditions. This pattern is much like we observed in September 2000 and October 2007.