Is Congress Enabling The 'Disabling' Of America? 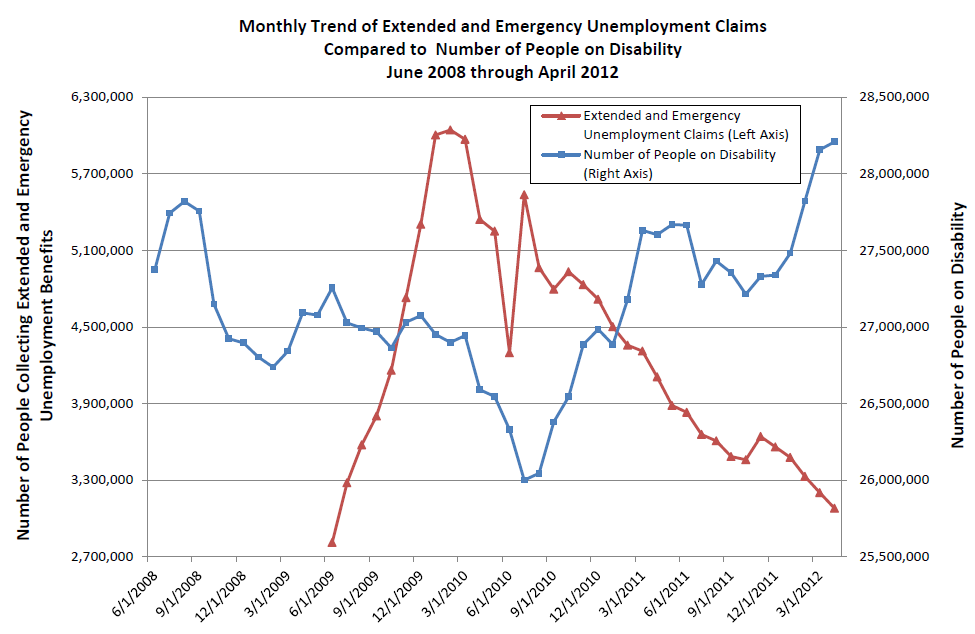 It’s amazing that over 60% of the people receiving SSDI have conditions that can be easily faked and not verified. Depression about having to get a job is considered a mental disorder, allowing the deadbeat to receive about $50,000 of benefits for doing nothing. That mysterious muscle ache which can’t be diagnosed will also do the job. Just watch the shyster lawyer commercials during the Jerry Springer Show to see how you are ENTITLED to SSDI.

The fact is this program was created for workers who got injured on the job and was supposed to be temporary until they could recover and go back to work. The workplace is 100 times safer than it was 25 or 50 years ago. Service jobs pushing paper or using computers or cash registers is not conducive to disability. Eating until you are 300 pounds will make you unemployable, but is no excuse for going on disability. Only 1% of the FSA that goes on SSDI ever goes back to work.

Workplace injuries account for less than 5% of all SSDI recipients. The billions being doled out to lazy good for nothing parasites has bankrupted the SSDI program. But don’t worry. They’ll just rob the equally bankrupt SSI program to keep paying these lazy fucks. Obama and his minions think this program is great, as it solidifies the Democratic base of non-working voters. Plus, these people don’t count in the unemployment rate calculation.

Once again Congress is likely to do something stupid.  Really, really stupid.

Sometime next year Social Security’s $150 billion disability-insurance program will become insolvent. The program, which offers income supplements to those who cannot work full time due to physical or mental disabilities, has buckled as the number of beneficiaries has soared to more than 11 million in 2014, from 3.8 million in 1984. The bipartisan Social Security Advisory Board has urged reforms.

You can’t explain this away as “demographics” (e.g. people getting older); that’s not the answer at all.  Further, not only have the self-reported rates of work-limiting disability not changed materially in 30 years but the reported rate of on-the-job injuries has come down materially.  Whatever you may think of OSHA, the fact is that “the job is getting done” in that regard.

But Congressional loosening of benefit requirements, and more-importantly allowing people to remain on disability effectively for life once they gain it (less than 1% of the people on disability return to the workforce in any given year) make the problem one that is utterly intractable without major changes.

In addition we must consider those who become disabled through either intentional personal conduct or willful refusal to follow through on a rehabilitation program.  Today you can literally smoke meth or suck down bottles of booze for decades, utterly destroy your health, and then go on disability, receiving what amounts to a $24,000 a year income between your SSDI payments and eligibility for Medicare at zero cost.  That’s not bad, and you can then turn around and make up to about $13,000 on the side without losing any of those benefits!

I will note that these gimmes are also non-taxable, meaning that we’re talking about a middle-class living for which you need do exactly nothing.  There are a whole host of people making $30,000 a year that take home less than the person on “disability.”

There are in fact people who, through just bad luck or otherwise no fault of their own, find themselves unable to work.  Then there are those who legitimately are hurt on the job.  Part of your Social Security taxes that are paid in by you every pay period is supposed to go toward the possibility that one of these things will happen to you.

But it is utterly outrageous for you to be able to buy fire insurance on your house and then intentionally burn it down to collect the money.  That is considered arson and a crime.

But that is, in effect, what we permit with this program when we allow disability claims for people who are unable to work due to self-inflicted and intentional injury, such as disability caused by the ingestion of drugs or alcohol.

Cutting that off alone would not resolve all the problems but it sure would go a long way toward helping.  So would requiring medical exams on an annual basis by physicians paid for by the government instead of “private physicians” who have every incentive to find someone “disabled.”  Indeed, independent studies have found that a very material percentage of the people on disability have the ability to perform some sort of  remunerative work.