Bill Gross: "This Is All Ending"

Having called for the end of the great Bund rally (and so far nailed it in dramatic fashion), Janus' Bill Gross sees more exuberance coming to an end soon, 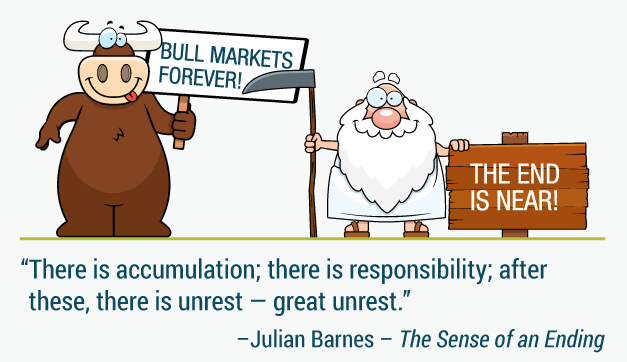 Having turned the corner on my 70th year, like prize winning author Julian Barnes, I have a sense of an ending. Death frightens me and causes what Barnes calls great unrest, but for me it is not death but the dying that does so. After all, we each fade into unconsciousness every night, do we not? Where was “I” between 9 and 5 last night? Nowhere that I can remember, with the exception of my infrequent dreams. Where was “I” for the 13 billion years following the Big Bang? I can’t remember, but assume it will be the same after I depart – going back to where I came from, unknown, unremembered, and unconscious after billions of future eons. I’ll miss though, not knowing what becomes of “you” and humanity’s torturous path – how it will all turn out in the end. I’ll miss that sense of an ending, but it seems more of an uneasiness, not a great unrest. What I fear most is the dying – the “Tuesdays with Morrie” that for Morrie became unbearable each and every day in our modern world of medicine and extended living; the suffering that accompanied him and will accompany most of us along that downward sloping glide path filled with cancer, stroke, and associated surgeries which make life less bearable than it was a day, a month, a decade before.

Turning 70 is something that all of us should hope to do but fear at the same time. At 70, parents have died long ago, but now siblings, best friends, even contemporary celebrities and sports heroes pass away, serving as a reminder that any day you could be next. A 70-year-old reads the obituaries with a self-awareness as opposed to an item of interest. Some point out that this heightened intensity should make the moment all the more precious and therein lies the challenge: make it so; make it precious; savor what you have done – family, career, giving back – the “accumulation” that Julian Barnes speaks to. Nevertheless, the “responsibility” for a life’s work grows heavier as we age and the “unrest” less restful by the year. All too soon for each of us, there will be “great unrest” and a journey’s ending from which we came and to where we are going.

A “sense of an ending” has been frequently mentioned in recent months when applied to asset markets and the great Bull Run that began in 1981. Then, long term Treasury rates were at 14.50% and the Dow at 900. A “20 banger” followed for stocks as Peter Lynch once described such moves, as well as a similar return for 30 year Treasuries after the extraordinary annual yields are factored into the equation: financial wealth was created as never before. Fully invested investors wound up with 20 times as much money as when they began. But as Julian Barnes expressed it with individual lives, so too does his metaphor seem to apply to financial markets: “Accumulation, responsibility, unrest…and then great unrest.” Many prominent investment managers have been sounding similar alarms, some, perhaps a little too soon as with my Investment Outlooks of a few years past titled, “Man in the Mirror”, “Credit Supernova” and others. But now, successful, neither perma-bearish nor perma-bullish managers have spoken to a “sense of an ending” as well. Stanley Druckenmiller, George Soros, Ray Dalio, Jeremy Grantham, among others warn investors that our 35 year investment supercycle may be exhausted. They don’t necessarily counsel heading for the hills, or liquidating assets for cash, but they do speak to low future returns and the increasingly fat tail possibilities of a “bang” at some future date. To them, (and myself) the current bull market is not 35 years old, but twice that in human terms. Surely they and other gurus are looking through their research papers to help predict future financial “obits”, although uncertain of the announcement date. Savor this Bull market moment, they seem to be saying in unison. It will not come again for any of us; unrest lies ahead and low asset returns. Perhaps great unrest, if there is a bubble popping.

Policymakers and asset market bulls, on the other hand speak to the possibility of normalization – a return to 2% growth and 2% inflation in developed countries which may not initially be bond market friendly, but certainly fortuitous for jobs, profits, and stock markets worldwide. Their “New Normal” as I reaffirmed most recently at a Grant’s Interest Rate Observer quarterly conference in NYC, depends on the less than commonsensical notion that a global debt crisis can be cured with more and more debt. At that conference I equated such a notion with a similar real life example of pouring lighter fluid onto a barbeque of warm but not red hot charcoal briquettes in order to cook the spareribs a little bit faster. Disaster in the form of burnt ribs was my historical experience. It will likely be the same for monetary policy, with its QE’s and now negative interest rates that bubble all asset markets.

But for the global economy, which continues to lever as opposed to delever, the path to normalcy seems blocked. Structural elements – the New Normal and secular stagnation, which are the result of aging demographics, high debt/GDP, and technological displacement of labor, are phenomena which appear to have stunted real growth over the past five years and will continue to do so. Even the three strongest developed economies – the U.S., Germany, and the U.K. – have experienced real growth of 2% or less since Lehman. If trillions of dollars of monetary lighter fluid have not succeeded there (and in Japan) these past 5 years, why should we expect Draghi, his ECB, and the Eurozone to fare much differently?

Because of this stunted growth, zero based interest rates, and our difficulty in escaping an ongoing debt crisis, the “sense of an ending” could not be much clearer for asset markets. Where can a negative yielding Euroland bond market go once it reaches (–25) basis points? Minus 50? Perhaps, but then at some point, common sense must acknowledge that savers will no longer be willing to exchange cash Euros for bonds and investment will wither. Funny how bonds were labeled “certificates of confiscation” back in the early 1980’s when yields were 14%. What should we call them now? Likewise, all other financial asset prices are inextricably linked to global yields which discount future cash flows, resulting in an Everest asset price peak which has been successfully scaled, but allows for little additional climbing. Look at it this way: If 3 trillion dollars of negatively yielding Euroland bonds are used as the basis for discounting future earnings streams, then how much higher can Euroland (Japanese, UK, U.S.) P/E’s go? Once an investor has discounted all future cash flows at 0% nominal and perhaps (–2%) real, the only way to climb up a yet undiscovered Everest is for earnings growth to accelerate above historical norms. Get down off this peak, that F. Scott Fitzgerald once described as a “Mountain as big as the Ritz.” Maybe not to sea level, but get down. Credit based oxygen is running out.

At the Grant’s Conference, and in prior Investment Outlooks, I addressed the timing of this “ending” with the following description: “When does our credit based financial system sputter / break down? When investable assets pose too much risk for too little return. Not immediately, but at the margin, credit and stocks begin to be exchanged for figurative and sometimes literal money in a mattress.” We are approaching that point now as bond yields, credit spreads and stock prices have brought financial wealth forward to the point of exhaustion. A rational investor must indeed have a sense of an ending, not another Lehman crash, but a crush of perpetual bull market enthusiasm.

But what should this rational investor do? Breathe deeply as the noose is tightened at the top of the gallows? Well no, asset prices may be past 70 in “market years”, but savoring the remaining choices in terms of reward / risk remains essential. Yet if yields are too low, credit spreads too tight, and P/E ratios too high, what portfolio or set of ideas can lead to a restful, unconscious evening ‘twixt 9 and 5 AM? That is where an unconstrained portfolio and an unconstrained mindset comes in handy. 35 years of an asset bull market tends to ingrain a certain way of doing things in almost all asset managers. Since capital gains have dominated historical returns, investment managers tend to focus on areas where capital gains seem most probable. They fail to consider that mildly levered income as opposed to capital gains will likely be the favored risk / reward alternative. They forget that Sharpe / information ratios which have long served as the report card for an investor’s alpha generating skills were partially just a function of asset bull markets. Active asset managers as well, conveniently forget that their (my) industry has failed to reduce fees as a percentage of assets which have multiplied by at least a factor of 20 since 1981. They believe therefore, that they and their industry deserve to be 20 times richer because of their skill or better yet, their introduction of confusing and sometimes destructive quantitative technologies and derivatives that led to Lehman and the Great Recession.

Hogwash. This is all ending. The successful portfolio manager for the next 35 years will be one that refocuses on the possibility of periodic negative annual returns and miniscule Sharpe ratios and who employs defensive choices that can be mildly levered to exceed cash returns, if only by 300 to 400 basis points. My recent view of a German Bund short is one such example. At 0%, the cost of carry is just that, and the inevitable return to 1 or 2% yields becomes a high probability, which will lead to a 15% “capital gain” over an uncertain period of time. I wish to still be active in say 2020 to see how this ends. As it is, in 2015, I merely have a sense of an ending, a secular bull market ending with a whimper, not a bang. But if so, like death, only the timing is in doubt. Because of this sense, however, I have unrest, increasingly a great unrest. You should as well.