"The Worldwide Credit Boom Is Over, Now Comes The Tidal Wave Of Global Deflation"

If you want a cogent metaphor for the central bank enabled crack-up boom now underway on a global basis, look no further than today’s scheduled chapter 11 filling of met coal supplier Alpha Natural Resources (ANRZ). After becoming a public company in 2005, its market cap soared from practically nothing to $11 billion exactly four years ago. Now it’s back at the zero bound. 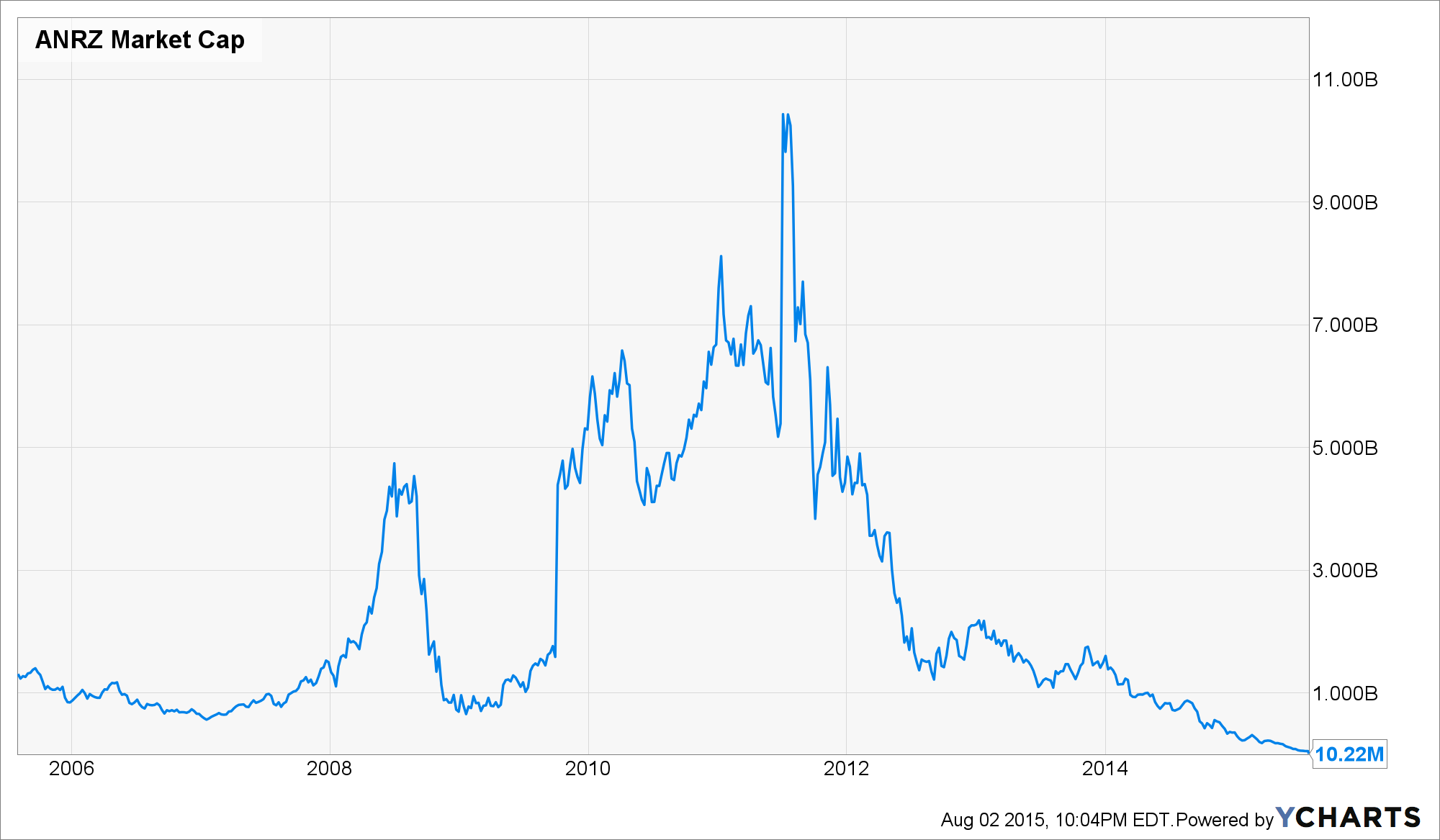 Yes, bankruptcies happen, and this is most surely a case of horrendous mismanagement. But the mismanagement at issue is that of the world’s central bank cartel.

The latter have insured that there will be thousands of such filings in the years ahead because since the mid-1990s the central banks has engulfed the global economy in an unsustainable credit based spending boom, while utterly disabling and falsifying the financial system that is supposed to price assets honestly, allocate capital efficiently and keep risk and greed in check.

Accordingly, the ANRZ stock bubble depicted above does not merely show that the boys, girls and robo-traders in the casino got way too rambunctious chasing the “BRICs will grow to the sky” tommyrot fed to them by Goldman Sachs. What was actually happening is that the central banks were feeding the world economy with so much phony liquidity and dirt cheap capital that for a time the physical economy seemed to be doing a veritable jack-and-the-beanstalk number.

In fact, the central banks generated a double-pumped boom——first in the form of a credit-fueled consumption spree in the DM economies that energized the great export machine of China and its satellite suppliers; and then after the DM consumption boom crashed in 2008-2009 and threatened to bring the export-mercantilism of China’s red capitalism crashing down on Beijing’s rulers, the PBOC unleashed an even more fantastic investment and infrastructure boom in China and the rest of the EM.

During the interval between 1992 and 1994 the world’s monetary system—–which had grown increasingly unstable since the destruction of Bretton Woods in 1971——took a decided turn for the worst. This was fueled by the bailout of the Wall Street banks during the Mexican peso crisis; Mr. Deng’s ignition of export mercantilism in China and his discovery that communist party power could better by maintained from the end of the central bank’s printing presses, rather than Mao’s proverbial gun;  and Alan Greenspan’s 1994 panic when the bond vigilante’s dumped over-valued government bonds after the Fed finally let money market rates rise from the ridiculously low level where Greenspan had pegged them in the interest of re-electing George Bush Sr. in 1992.

From that inflection point onward, the global central banks were off to the races and what can only be described as a credit supernova exploded throughout the warp and woof of the world’s economy. To wit, there was about $40 trillion of debt outstanding in the worldwide economy during 1994, but this figure reached $85 trillion by the year 2000, and then erupted to $200 trillion by 2014. That is, in hardly two decades the world debt increased by 5X.

To be sure, in the interim a lot of phony GDP was created in the world economy. This came first in the credit-bloated housing and commercial real estate sectors of the DM economies through 2008; and then in the explosion of infrastructure and industrial asset investment in the EM world in the aftermath of the financial crisis and Great Recession. But even then, the growth of unsustainable debt fueled GDP was no match for the tsunami of debt itself.

At the 1994 inflection point, world GDP was about $25 trillion and its nominal value today is in the range of $70 trillion—-including the last gasp of credit fueled spending (fixed asset investment) that continues to deliver iron ore mines, container ships, earthmovers, utility power plants, deep sea drilling platforms and Chinese airports, highways and high rises which have negligible economic value. Still, even counting all the capital assets which were artificially delivered to the spending (GDP) accounts, and which will eventually be written-down or liquidated on balance sheets, GDP grew by only $45 trillion in the last two decades or by just 28% of the $160 trillion debt supernova.

Here is what sound money men have known for decades, if not centuries. Namely, that this kind of runaway credit growth feeds on itself by creating bloated, artificial demand for materials and industrial commodities that, in turn, generate shortages of capital assets like mines, ships, smelters, factories, ports and warehouses that require even more materials to construct. In a word, massive artificial credit sets the world digging, building, constructing, investing and gambling like there is no tomorrow.

In the case of Alpha Natural Resources, for example, the bloated demand for material took the form of met coal. And the price trend shown below is not at all surprising in light of what happened to steel capacity in China alone. At the 1994 inflection point met coal sold for about $35/ton, but at that point the Chinese steel industry amounted to only 100 million tons. By the time of the met coal peak in 2011, the Chinese industry was 11X larger and met coal prices had soared ten-fold to $340 per ton.

And here is where the self-feeding dynamic comes in. That is, how we get monumental waste and malinvestment from a credit boom. In a word, the initial explosion of demand for commodities generates capacity shortages and therefore soaring windfall profits on in-place capacity and resource reserves in the ground.

These false profits, in turn, lead speculators to believe that what are actually destructive and temporary economic rents represents permanent value streams that can be capitalized by equity owners.

But as shown below, eventually the credit bubble stops growing, materials demand flattens-out and begins to rollover, thereby causing windfall prices and profits to disappear. This happens slowly at first and then with a rush toward the drain.

ANRZ is thus rushing toward the drain because it got capitalized as if the insanely uneconomic met coal prices of 2011 would be permanent.

Needless to say, an honest equity market would never have mistaken the peak met coal price of $340/ton in early 2011 as indicative of the true economics of coking coal. After all, freshman engineering students know that the planet is blessed (cursed?) with virtually endless coal reserves including grades suitable for coking.

Yet in markets completely broken and falsified by central bank manipulation and repression, the fast money traders know nothing accept the short-run “price action” and chart points. In the case of ANZR, this led its peak free cash flow of $380 million in early 2011 to be valued at 29X. 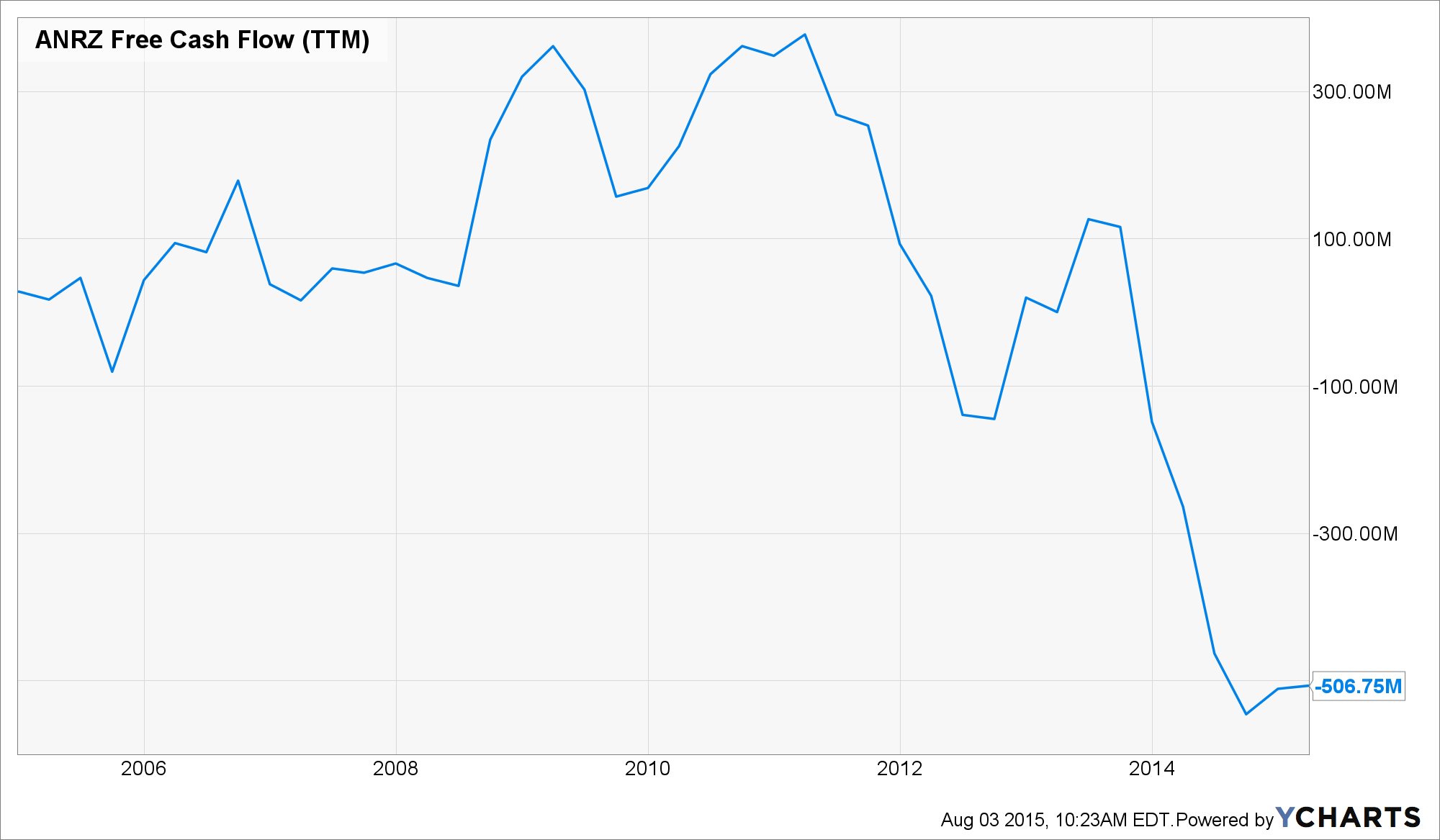 Self-evidently, a company that had averaged $50 to $75 million of free cash flow in the already booming met coal market of 2005-2008 was hardly worth $1 billion. The subsequent surge of free cash flow was nothing more than windfall rents on ANZR’s existing reserves, and, accordingly, merited no increase in its market capitalization or trading multiple at all.

In fact, even superficial knowledge of the met coal supply curve and production economics at the time would have established that even prices of $100 per ton would be hard  to sustain after the long-term capacity expansion than underway came to fruition.

This means that ANRZ’s sustainable free cash flow never exceeded about $80 million, and that at its peak 2011 capitalization of $11 billion it was being traded at 140X. In a word, that’s how falsified markets go completely haywire in a central bank driven credit boom.

As it happened, the full ANZR story is far worse. During the last 10 years it generated $3.2 billion in cash flow from operations——including the peak cycle profit windfalls embedded in its reported results.   Yet it spent $5 billion on CapEx and acquisitions during the same period, while spending nearly another $750 million that it didn’t have on stock buybacks and dividends.

Yes, it was the magic elixir of debt that made ends appear to meet in its financial statements. Needless to say, the climb of its debt from $635 million in 2005 to $3.3 billion presently was reported in plain sight and made no sense whatsoever for a company dependent upon the volatile margins and cash flows inherent in the global met coal trade.

So when we insist that markets are broken and the equities have been consigned to the gambling casinos, look no farther than today’s filing by Alpha Natural Resources.

Markets which were this wrong on a prominent name like ANRZ at the center of the global credit boom did not make a one-time mistake; they are the mistake.

As it now happens, the global credit boom is over; DM consumers are stranded at peak debt; and the China/EM investment frenzy is winding down rapidly.

Now comes the tidal wave of global deflation. The $11 billion of bottled air that disappeared from the Wall Street casino this morning is just the poster boy—–the foreshock of the thundering collapse of inflated asset values the lies ahead.