Leveraged Financial Speculation In The US At A Familiar Peak, Once Again

I’m convinced that perhaps Trillions worth of speculative leverage have accumulated throughout global currency and securities markets at least partially based on the perception that policymakers condone this leverage as integral (as mortgage finance was previously) in the fight against mounting global deflationary forces."

The basic diagnosis is correct.   But the nature of the disease, and the appropriate remedies, may not be so easily apprehended, except through simple common sense.  And that is a rare commodity these days.

Like a dog returns to its vomit, the Fed's speculative bubble policy enables the one percent to once again feast on the carcass of the real economy.

'And no one could have ever seen it coming.'

Once is an accident.

Twice is no coincidence.

Remind yourself what has changed since then.  Banks have gotten bigger.   Schemes and fraud continue.

What will the third time be like?  And the fourth? 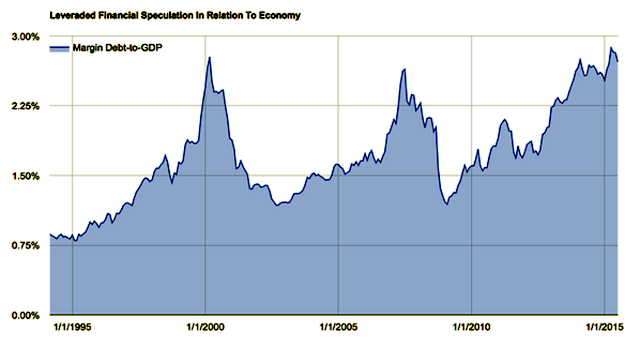 Do you think that Jamie bet Lloyd a dollar that they couldn't do it again?

Should we ask them to please behave, levy some token fines, watch the politicans yell and posture in some toothless public hearings, let all of them keep their jobs and their bonuses?   And then bail them out, wind up the old Victrola,  and have another go at the same old thing again?

This policy we have now is the trickle down stimulus that the wealthy financiers have been sucking on with every opportunity that they have made for themselves since the days of Andrew Jackson. Whenever the ability to create and distribute money has been handed over by a craven Congress to private corporations and banking cartels without sufficient oversight and regulation, excessive speculation, financial recklessness, and moral hazard have acted like a plague of misery and stagnation on the real economy.

"Gentlemen! I too have been a close observer of the doings of the Bank of the United States. I have had men watching you for a long time, and am convinced that you have used the funds of the Bank to speculate in the breadstuffs of the country. When you won, you divided the profits amongst you, and when you lost, you charged it to the Bank.

You tell me that if I take the deposits from the Bank and annul its charter I shall ruin ten thousand families. That may be true, gentlemen, but that is your sin! Should I let you go on, you will ruin fifty thousand families, and that would be my sin!

You are a den of vipers and thieves. I have determined to rout you out, and by the Eternal, (bringing his fist down on the table) I will rout you out."

From the original minutes of the Philadelphia bankers sent to meet with President Jackson February 1834, from Andrew Jackson and the Bank of the United States (1928) by Stan V. Henkels

I believe all of the above is entirely possible.  Because we still have an unashamed cadre of quack economists and their ideologically blind followers blaming the victims,  prescribing harsh punishments for the weak, laying all the blame on 'government' and not corrupt officials on the payrolls of Big Money, and giving the gods of the market and their masters of the universe a big kiss on the head, and expecting them to just do the right thing the next time out of the natural goodness of their unrestrained natures the next time.

What could go wrong with that?

Genuine reform.   It's too much work, and too much trouble.

h/t Jesse Felder for the chart