This Is Not A Retest - It's A Live Bear!

By the lights of bubblevision, Tuesday’s plunge was just a bull market “retest” of last week’s lows, which posted at 1867 on the S&P 500. As is evident below, the test was passed with 80 points to spare at today’s close.

So according to the talking bull heads - CNBC had three of them on the screen at once about 2pm—–its time to start nibbling on all the bargains. Soon you may even want to just back up the truck.

You can supposedly see it right here in the charts. The market hit the October 15 Bullard Rip low last week, and has gone careening upwards where it is now allegedly forming a new bottom around 1950. Remember, its a process. Be patient. 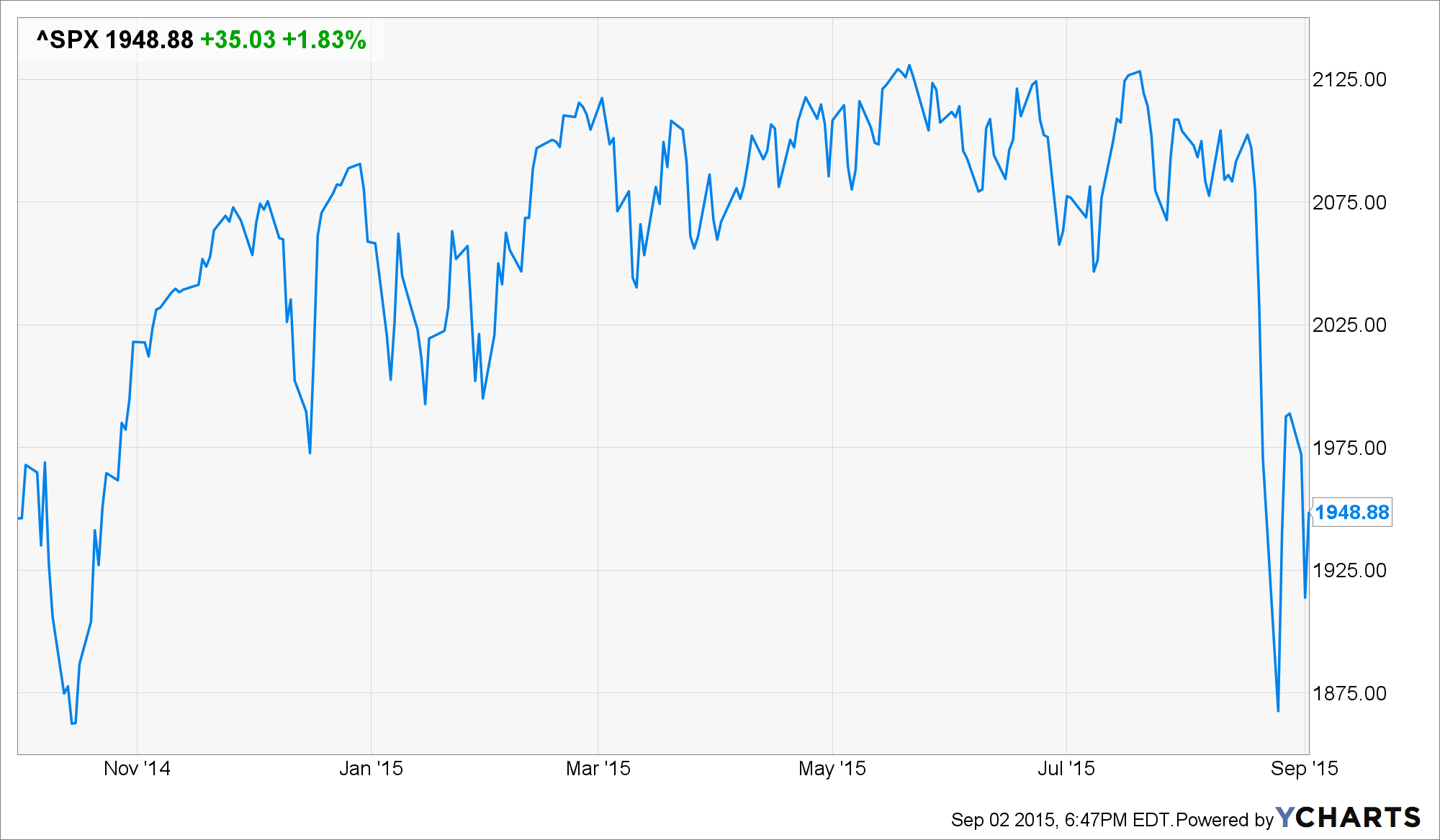 Not on your life! The world is heading into an unprecedented monetary deflation - with output and trade falling nearly everywhere. That implosion is already rumbling through Canada, Mexico, Brazil, Australia, South Korea, Malaysia, Indonesia, Russia, Japan, the Persian Gulf oil states and countless lesser economies in between. And at the center, of course, is the unraveling of the Great Red Ponzi of China.

In the face of this on-coming economic storm, honest financial markets would have been selling off long ago, and, in fact, would never have approached today’s absurd levels of over-valuation. But financial markets have been hopelessly corrupted by two decades of massive central bank intrusion and falsification of asset prices. Consequently, Wall Street punters and their retainers and cheerleaders cannot see the forest for the trees.

The “1000 points of fright” last Monday is actually a gift. You can now buy the market at 15X, which is tantamount to a steal. So he said, and with no inconsiderable air of annoyance that anyone would think otherwise, let alone succumb to panic.

So let’s start with where we are at the end of Q2 2015 in the real world of GAAP profits. That is, the kind of earnings that CEOs and CFOs certify to the SEC upon penalty of jail as fair, accurate and complete, according to well settled general accounting principles.

It turns out that the reported LTM net income (latest 12 months as of June 2015) of the 500 largest US companies in the index came in at $97.32 per share. But that’s down considerably from the LTM figure of $103.12 per share in the June quarter of last year, and was off by 8% from peak LTM earnings of $106 per share in the September quarter last fall.

What this means is that the market is not really trading at 15X at all, but closed today at 20X—–which is an altogether different kettle of fish. By the lights of permabulls like CNBCs 2pm trio, of course, the market is always trading at 15X and is always cheap. You might even think that Wall Street’s ex-items year-ahead EPS estimates are goal-seeked—-and you might well be on to something.

In any event, how do we leap the chasm from $97 per share and falling to $130 per share and soaring?  Well, you mount a Wall Street hockey stick, close your eyes to the rest of the world and hope for a swell ride.

In the alternative, you might want to scroll back to nearly an identical inflection point in mid-2007 when the Greenspan housing and credit bubble was nearing its apogee. To be specific, LTM GAAP earnings at the time were about $85 per share and the June 2007 quarter closed with the index at about 1500 or just 4% below its October peak of 1565.

So the market was positioned at 17.6X honest-to-goodness GAAP earnings in the eve of the Greenspan Bubble’s collapse. Needless to say, that was a pretty sporty multiple under the circumstances—–the rot in the Bear Stearns mortgage funds had already been exposed and the sub-prime market had gone stone cold in the spring. Yet it was well below today’s 20X.

Naturally, Wall Street didn’t see it that way at the time. The ex-items consensus for 2008 was $120 per share of S&P 500 earnings, meaning that it was indeed time to back-up the truck. You could buy the broad market for less than 13X, said the talking heads, or more specifically the very same trio that made its appearance today.

Indeed, the chasm between reported GAAP and the forward hockey stick ex-items was $35 per share at that point in time. Ironically, today’s spread between the reported actual and the Wall Street hopium is the exact same $35 per share.

Here’s what happened next. By the June 2008 LTM period, GAAP earnings had fallen to $51 per share and by June 2009, after the meltdown, S&P 500 earnings for the previous four quarters were, well, $8 per share!

That’s right. The great Greenspan financial bubble collapsed; the global economy buckled; and corporate balance sheets were purged of 7-years worth of failed investments and financial engineering maneuvers gone astray, among sundry other losses. In the end, Wall Street’s $120 per share hockey stick got smashed into smithereens.

Eight years later we are at an even more fraught inflection point. The post-crisis money-printing binge was orders of magnitude larger and more radical, and was universally embraced by every significant central bank on the planet. As a consequence, the resulting financial bubble has become far more incendiary than the one which burst in September 2008, and the distortions, deformations and malinvestments in the global economy dramatically more insidious.

Obviously the onrushing collapse of China’s purported miracle of red capitalism is the epicenter of this great global deflation, but every nook and cranny of the world economy is implicated; and its shock waves are already wreaking havoc in areas that were especially swollen by the China trade.

On a nearby page, for example, we outlined the unfolding disaster in Brazil. This chart on the trend in year-over-year retail trade is stunning because Brazil’s inflation rate is above 5%.  So when nominal sales plunge from the boom time rate of 11% to negative 1% in June, it means that real sales are shrinking at nearly a depressionary pace. 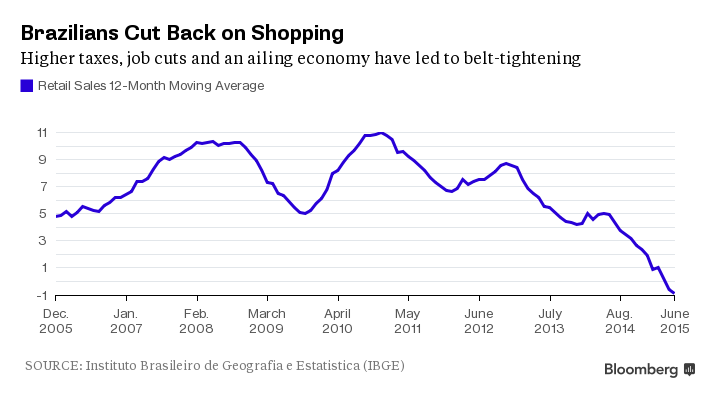 By all accounts, in fact, Brazil is plunging into its worst recession in the last half century. After years of booming jobs growth fueled by exports and a massive internal dose of monetary and fiscal profligacy, for example, its economy is now shedding workers at an unprecedented pace. 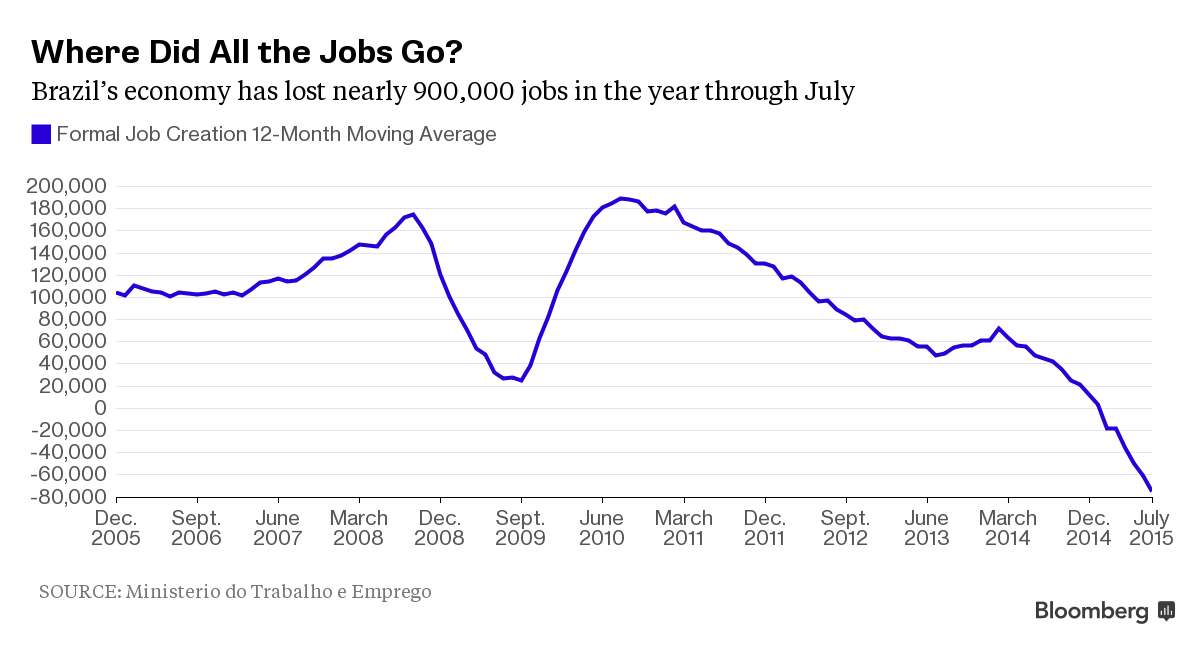 The point here is that Brazil is just the leading edge of the  epochal worldwide monetary reversal now underway. During the last 15 years its central bank balance sheet literally exploded, rising by more than 10X, while loans to the private sector more than quadrupled in the last seven years alone.

The consequence was a frenzy of government and household spending and business investment, expansion and speculation that bloated, deformed and destabilized the Brazilian economy beyond recognition. And those distortions were not contained to the Amazon economic basin alone, but where connected by a two-way highway of financial and trade flows that penetrated right into the heart of the US economy.

In the first instance, the massive but artificial and unsustainable export boom to China and its EM satellites generated enormous capital inflows to Brazil which caused its exchange rate to soar, even as its government frantically attempted to contain its rise. During that pre-2012 period, its finance minister even coined the terms “currency wars”.

The effect of the China export boom and the massive capital inflow, however, was to create an economy with apparent dollar purchasing power far greater than its sustainable real wealth and output capacity. This immense distortion is best measured by the US dollar value of its GDP. As shown below, during the six years between 2006 and 2012, Brazil’s dollarized GDP grew at a fantastic 20% annual rate!

It is no wonder Miami became a boom town. Giddy Brazilians who had enough sense to realize its socialist government had not performed an economic miracle of fishes and loaves exchanged their red hot real’s for dollars and trucked northward to condo land in south Florida.

At the same time, its booming economy was a magnet for US money managers parched for yield in Bernanke’s ZIRP repressed market and for US exporters temporarily benefited by a dollar/BRL exchange rate that made them suddenly far more competitive. Accordingly, hundreds of billions of hot dollar capital flowed into Brazilian equity and corporate bond markets, while US exports nearly quadrupled in eight years. 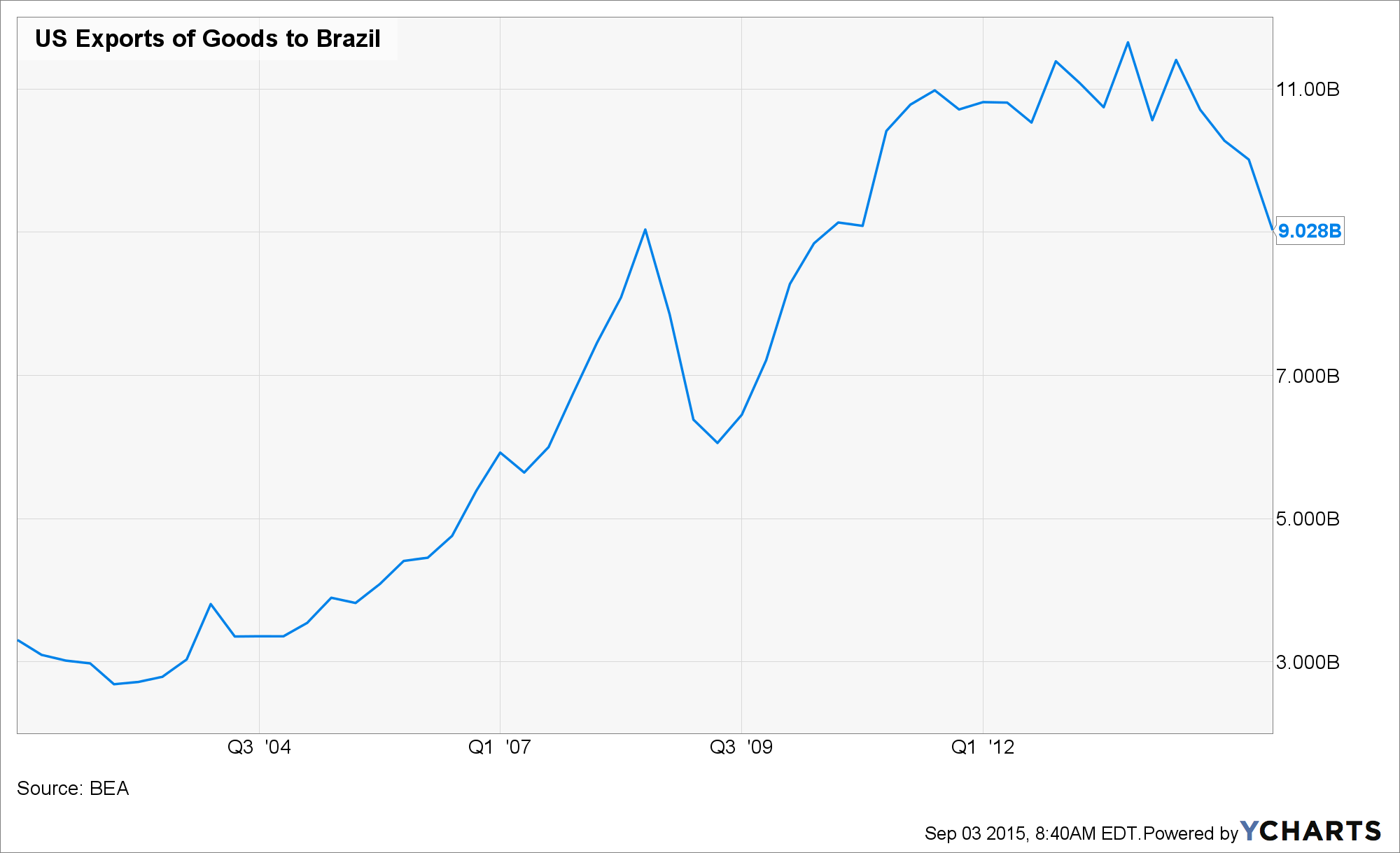 US Exports of Goods to Brazil data by YCharts

Here’s the point. The US economy was not “decoupled” from Brazil in the slightest during the expansion of the great global monetary boom that has now crested. Nor will it uncouple during the deflationary bust that must necessarily ensue.

The ultimate worldwide hit to US exports is evident in the 20% drop in shipments to Brazil shown in the chart above, and that’s just for starters because its economic depression is just getting underway. Likewise, the panicked flight of hot dollars from Brazil now besetting the global financial markets is only indicative of the turmoil to come as the massive “dollar short” unwinds on a global basis.

So this is not a retest. We are in the midst of an unprecedented global deflation. A real live bear market is once again at hand.