Submitted by Doug Casey via InternationalMan.com,

It’s always been true, as Bourne said, that “war is the health of the State.” But it’s especially true when economic times get tough. That’s because governments like to blame their problems on outsiders; even an imagined foreign threat tends to unify opinions around those of the leaders. Since economies around the world are all weakening, and political leaders are all similar in essential mindset, there’s good reason to believe the trend towards World War III is accelerating.

Many politicians and pundits in the U.S. blame “those damn Chinese” for taking “our jobs” by filling Walmart with tons of cheap goods, and the swarthy ragheads for making the price of oil too high (usually, but now too low).

The Russians, the Iranians, the Taliban (who will soon reconquer Afghanistan) and ISIS (which is carving out a new nation-state from the ruins of Syria and Iraq) are permanent members on the list of Bad Boys.

But now, since the Obama regime has decided to “pivot to the East,” you can underline China’s name on that list.

The “pivot” being the U.S. government’s new focus on meddling in Asia, as opposed to meddling in the Middle East and Europe. U.S. Defense Secretary Ash Carter says the U.S. will be the principal security power in the Pacific “for decades to come.” I’m sure the locals, including the Chinese, were thrilled to hear that.

It’s said that the U.S. government has combat troops (or advisors, as highly trained special ops guys are usually euphemistically termed) in about 100 countries. It’s hard to keep track of their latest “intervention”…although “interference” is a better word. Note that I said “they,” not “us,” in reference to Washington. The city has a life of its own and its interests are not necessarily those of the country it rules.

Let’s see…sending arms to a puppet government in Kiev to help put down a secession in Donetsk and Lugansk. Sending jets, and now ground troops, to Syria, which will quite possibly create an incident with the Russians. 150 soldiers to Uganda to fight the Lord’s Resistance Army and 300 to Cameroon to fight Boko Haram. And more troops to Iraq and Afghanistan to help out our “allies.” For the moment, they’re the best allies money can buy.

It’s hard to keep track of them all, with something new almost every week. But, on the bright side, war is nature’s way of teaching Americans geography.

So, with that in mind, we now have to learn where the Spratly Islands are. Let’s start with a map. 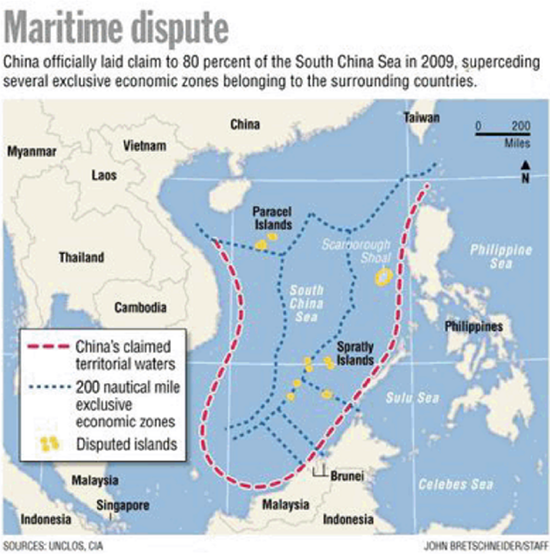 You’ll note the red line. In 2012 China decided that the entire area, right up to the shorelines of Vietnam, Taiwan, the Philippines, Malaysia, and Brunei, was part of its economic zone. The governments of all those countries also have claims to parts of the South China Sea, and the Spratlys in particular. You’ll also note the Paracels, another zone of contention, between China and Vietnam.

Believe it or not, from 1956 to 1972 (when he was jailed for his efforts) a Filipino businessman, one Tomás Cloma, also attempted to claim part of the Spratlys, and make it an independent country, Freedomland. This caught my attention, in that I was (very marginally) involved in three other island independence movements in the ‘70s: Nagriamel, Abaco, and Minerva. Those, however, are stories (all a mixture of tragedy, comedy, and pathos) for another day.

Until very recent times, the Spratlys were best known as a hazard to navigation, with about 750 islets, reefs, and sandbars, total land area about 1.5 square miles, spread over about 160,000 square miles of the South China Sea.

I’ve never been to the Spratlys. But their potential value is clear. It’s said up to 30% of the world’s fish catch comes from the South China Sea. And, almost needless to say, it’s conjectured that the area contains a lot of oil.

So, you’re probably asking yourself, “What is that to me?” The answer should logically be “Nothing, really, unless it’s a question on a quiz show.”

But the U.S. government, although it, as usual, has no dog in the fight, has decided to get involved. The catalyst for it acting now is that China is in the process of transforming at least seven reefs into usably large artificial islands, several with long airstrips.

I’ve looked at the history of who has used, and claimed ownership, of the islands over the centuries. All the adjacent countries have somewhat reasonable-sounding claims. And the Taiwanese, Filipinos, Malaysians and Vietnamese each have a military presence on one or more of the Spratlys. But only the recent Chinese efforts have drawn the U.S. government’s attention. Recently, they sent a guided missile destroyer, the USS Lassen, within the 12-mile limit of Subi Reef, which the Chinese are currently expanding. Reports are conflicting whether the ship was just innocently passing through, or trying to create a precedent.

I’d like to ask, how do you, I mean you personally, feel about that? I’d like to know. Scores of millions of Asian locals, who’d previously never even heard of the islands, and certainly can’t find them on a map, are getting worked up because their governments told them the islands were “theirs.” And now the U.S. is further complicating the matter. But here’s my take.

The Chinese seem quite out of line claiming the whole South China Sea as their economic zone. Shame on them. But how is that the problem of the U.S.? It’s the problem of the locals. Should the Chinese be able to build artificial islands? That’s a somewhat different question. I’d say, why not? Disputed or unclaimed land belongs to the person who uses it.

One thing is for sure: the U.S. government is asking for trouble flying military aircraft off the coast of China and sailing warships into waters they claim. How would the U.S. react if Chinese planes and warships were often seen off the West coast? Or if the Santa Catalina or San Juan islands developed independence movements that the Chinese backed?

The U.S. government feels pretty bold about its intrusion into the South China Sea, since no other government has a naval force even remotely comparable to its 12 aircraft carrier groups. But that boldness is foolish and unjustified. I’ve said for many years that those carriers are exactly analogous to battleships before World War II, or cavalry before World War I. They’re essentially sitting ducks, highly vulnerable to all manner of cheap, accurate missiles, both cruise and ballistic, that could swarm them en masse.

It will be a huge embarrassment to Americans (but a treat to divers a couple generations hence) when they’re sunk, and sprouting barnacles like the Japanese fleet in Truk Lagoon.

The U.S. knows that it’s China’s backyard, and they could sink any U.S. taskforce if they choose to. But they probably won’t. Why start a war when your enemy has a superior military, but you are growing your economy several times faster than he is? It makes more sense to wait…so it’s likely to remain a Mexican standoff, as opposed to an overture to World War III. But these things have a way of escalating unpredictably. In any event, it makes no sense to go to the other side of the globe just to provoke someone.

In the meantime, the U.S. carrier groups are prestigious, and great for sticking the U.S. government’s nose into far-off places where it’s not welcome. But they’re hugely expensive, at about $6 billion a ship, plus another billion or two per copy for its half-dozen escorts, plus another $200 million for each of the 50 or so F-35 fighters they’ll soon carry. Plus a few billion a year to keep each group operational. Not to worry on that score; the Chinese will surely lend the U.S. government more money to enable that.

There’s plenty of reason to be concerned about the roughly $1 trillion a year the U.S. spends on the military and “security.” Even though it’s more than the next 28 countries combined, it’s apparently not enough to keep America safe. In fact, it’s actually making the country less safe, by provoking and threatening other powers.

And if it doesn’t start a war in the short run, it’s going to guarantee a U.S. bankruptcy in the slightly longer run. All the “hawks” running for president this year (which is to say, almost every candidate) seem oblivious to the fact that, in anything but the briefest conflict, economic power completely trumps military hardware.

In conclusion, whenever you see a mention of the U.S. Navy and the Spratlys in the same paragraph, you’re seeing a reminder of an open vein helping to bleed America dry. And that’s the best case.