Dozens Of Global Stock Markets Are Already Crashing: "Not Seen Numbers Like These Since 2008"

The system is beyond the point where it is merely showing stresses and fractures. Things are now falling apart and there may well be no way of putting them back together again.

The media will continue to claim everything is fine, until the day of panic and reckoning when it will suddenly be the ‘next Greece’ or ‘2008 all over again’… but worse.

Anyone that tries to tell you that a global financial crisis is not happening is not being honest with you.  Right now, there are 27 major global stock markets that have declined by double digit percentages from their peaks earlier this year.  And this is truly a global phenomenon – we have seen stock market crashes in Asia, Europe, South America, Africa and the Middle East.  But because U.S. stocks are only down less than a thousand points from the peak earlier this year, most Americans seem to think that everything is just fine.

The truth, of course, is that everything is not fine.  We are witnessing a pattern similar to what we saw back in 2008.  Back then, Chinese stocks and other major stock markets started crashing first, and then U.S. stocks followed later.

But when you step back and look at what has been happening globally, a much more ominous picture emerges.  I spent much of the afternoon looking at stock market charts for the largest economies all over the globe.  What I discovered was financial carnage that was much worse than I anticipated.

It turns out that there are at least 27 major global stock markets that have fallen by more than 10 percent from peaks that were set earlier this year. As you can see, many of these stock market declines have been quite impressive…

4. United Kingdom: down close to 12 percent

We have not seen numbers like these since 2008, and trillions of dollars of stock market wealth has been wiped out globally.  So the “nothing is happening” crowd is simply dead wrong.  Stocks are already crashing all over the planet.

Just because the big U.S. stock market crash has not happened quite yet does not mean that a major global financial crisis is not happening.

But do you know what is crashing here in this country?

At this point, yields on the riskiest junk bonds have risen to levels that we have not seen since the last financial crisis.  As I have discussed repeatedly, yields on junk bonds spiked dramatically just before the stock market crash of 2008, and now it is happening again… 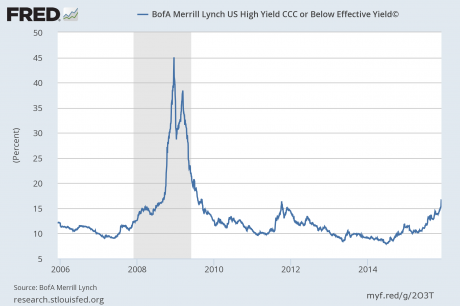 This is precisely the kind of behavior that we would expect to see if a major U.S. stock market crash was imminent.  Personally, I watch the junk bond market very, very closely because it is such a key leading indicator.  And according to Jeffrey Snider, it appears that “something” is starting to cause junk bonds to sell off at an alarming pace…

There isn’t much as far as confirmation, but it increasingly appears as if “something” just hit the triple hooks (CCC) in the junk bond bubble. At least as far as one view of it, Bank of America ML’s CCC implied yield, there was a huge selloff that brought the yield to a new cycle high (low in price) above even the 2011 crisis peak.

But just like in 2008, a lot of people will not heed the warnings because they don’t have the patience to watch long-term trends play out.

We live in a society where we expect constant instant gratification.  We have instant coffee, video on demand and 48 hour news cycles.  If something does not happen immediately, most of us quickly lose patience.

For months, I have been warning that conditions were perfect for another major global financial crisis, and since that time events have been unfolding in textbook fashion.

And as you can see from the numbers above, we have already entered a new global financial crisis.  If you tried to tell someone in China, Brazil or Saudi Arabia that a financial crisis was not happening, they would just laugh at you.  We need to start learning that the world doesn’t revolve around the United States.

Of course the U.S. is heading for tremendous difficulties as well.  This is something that I covered yesterday.  All of the fundamental economic numbers are absolutely screaming “recession”, and yet most of the “experts” are still forecasting good things for the coming year.

Those that do not learn from history are doomed to repeat it.  None of the problems that caused the crisis the last time around have been fixed, and most of our “leaders” seem blind to what is happening at this moment even though the exact same patterns that played out in 2008 are playing out once again right in front of our eyes.

If you have been waiting for the next global financial crisis, you can stop, because it is already here.

As we move toward the end of 2015, let us hope for the best, but let us also get prepared for the worst.