One of the recurring topics we have focused on extensively in the past few months has been the dramatic collapse of all shipping-related metrics when it comes to seaborne trade with China, from the recent record plunge in the Baltic Dry index...

... both of which are taking place even as China exports record amount of commodities to the outside world...

We have also repeatedly noted that the implications for both China, and the entire world, from these charts are dire because they suggest that not only is China not growing, but the entire world is now gripped in not only an earnings and GDP (in USD-denominated terms, global GDP is set to decline by several trillion dollars) recession, but also suffering its first trade contraction since the financial crisis.

And now, Bloomberg has turned its attention to just these, and other comparable charts, and published an article titled "Let's Just Hope Shipping Isn't Telling the Real Story of China", prudently adding that investors betting that China’s near-insatiable appetite for industrial raw materials will drive global economic growth may want to skip the shipping news.

For the first time in at least a decade, combined seaborne imports of iron ore and coal - commodities that helped fuel a manufacturing boom in the world’s second-largest economy -- are down from a year earlier. While demand next year may be a little better, slower-than-anticipated growth in 2015 has led to almost perpetual disappointment for shippers, after analysts’ predictions at the end of 2014 for a rebound proved wrong. 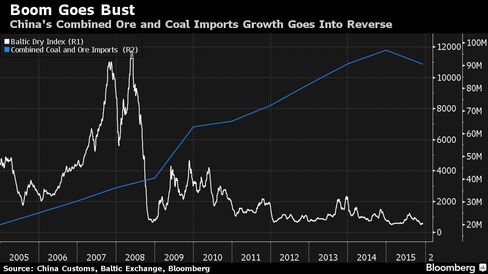 The article notes that China accounts for two in every three iron-ore cargoes in the world, and is the largest importer of soybeans and rice. But this year, demand has slowed to the point where any speculation that China may be growing at anything near to 7% is a joke.

Combined seaborne imports of iron ore and coal will drop 4.8 percent to 1.097 billion metric tons, the first decline since at least 2003, according to data from Clarkson Plc, the biggest shipbroker. A year ago, Clarkson was anticipating a 5.5 percent increase for 2015. The broker expects growth to increase just 0.04 percent next year. 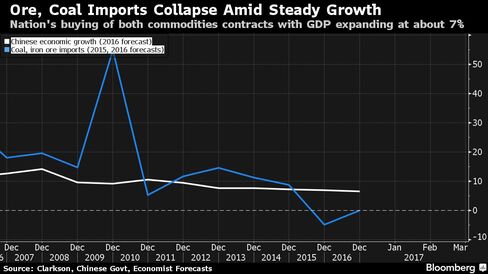 It will get worse: "The China Iron and Steel Association predicted crude-steel output will tumble by 23 million tons to 783 million tons next year. That lost output is more than a quarter of what U.S. steelmakers produce."

A big reason for the collapse in Chinese demand are Beijing's attempts to crack down on excess leverage.

Imports are weakening even as China’s economy keeps expanding because of reduced spending by local governments that are dominant players in the economy, according to Fielding Chen, a Hong Kong-based economist for Bloomberg Intelligence. The central government in January withdrew guarantees for Local Government Financing Vehicles used to finance infrastructure projects during the country’s boom years, when domestic capacity surged over the past decade, he said.

“This has reduced China’s appetite for steel and copper and other commodities that are used to build roads, subways and reservoirs,” Chen said. “It is not good for the economy and is one of the main reasons China cannot import more.”

While China has attempted to boost the economy using monetary (cutting RRR ratios and interest rates) and fiscal (boosting spending at the local government level) stimulus, for now it appears to have cut back on the traditional growth dynamo which propelled China as the focus of global growth during the financial crisis - its relentless debt creation, which has doubled its total debt/EBITDA from just over 150% in 2007 to over 300% as of this year (282% as of 2014).

It is this slowdown in China's debt creation that is the true reason behind the global growth slowdown experienced both in China and around the globe.

Bloomberg offers a ray of hope when it notes that the rout in buying showed signs of easing last month. China’s iron-ore imports rose to 82.13 million tons, a jump of 22 percent compared with a year earlier. Even so, the extra shipments are mostly because of rising Chinese steel exports, or tolling, rather than the nation’s own demand, according to Andy Xie who predicted in February that iron-ore prices would sink into the $30s this year, compared with $71 at the start of the year.

Unfortunately, there is only so much time China can buy: Chinese steel mills have been pressured by losses, low prices and overcapacity as demand drops to levels unseen since 2009, cutting profits and reducing incentive for re-stocking. Worse, as we first showed two months ago, as a result of until recently soaring debt levels and collapsing commodity prices, more than half of indebted Chinese commodity companies are facing the grim prospect of imminent bankruptcy as they can't even cover one year of interest with their existing cash flows.

As a result, the commentary is downright disastrous:

“For dry bulk, China has gone completely belly up,” said Erik Nikolai Stavseth, an analyst at Arctic Securities ASA in Oslo, talking about ships that haul everything from coal to iron ore to grain. “Present Chinese demand is insufficient to service dry-bulk production, which is driving down rates and subsequently asset values as they follow each other.”

“China’s slowdown has come as a major shock to the system,” said Hartland Shipping’s Prentis. “We are now caught in the twilight zone between shifts in China’s economy, and it is uncomfortable as it’s causing unexpected slowing of demand.”

So what can one do?

There are two options: do as the Blooomberg article sarcastically suggests, and Hope Shipping Isn't Telling the Real Story of China, or one can prepare for the mother of all mean reversions: after all it was China that dragged the world out of the second great depression (if only temporarily) when it unleashed the biggest debt-creation spree in history (one putting the Fed and all its peers to shame as we showed previously). It will be only fitting that China's drags it back in.