Whenever I see one of these stories about how little Americans have available for an emergency, my blood starts to boil. I understand that poor people making $25,000 per year are forced to live paycheck to paycheck. But when 63% of all Americans can’t handle a $500 emergency, and 46% of  households making over $75,000 can’t handle a $500 emergency, then they are just plain stupid, frivolous, and incapable of distinguishing between wants and needs. Delayed gratification is a trait almost non-existent among Americans today.

The first thing that infuriates me is the assumption that a $500 car repair or house repair is an unexpected emergency. It’s a fucking living expense. It’s not a fucking surprise. Your car will need new tires every few years. That’s $500 or more. Your hot water heater, air conditioner, roof, windows, etc. will need to be replaced. Everyone gets sick. That is not unexpected. Anyone who lives their life as if these expenses are a shocking surprise is a blithering idiot. And this country is crawling with blithering idiots.

So the majority of Americans can’t handle a $500 expense, but for the last two years there have been 35 million new cars “sold” to blithering idiots on credit or leases. Even though they have no money, they decide it’s a brilliant idea to commit to a 7 year payment of $300 to $500 per month on an asset that declines in value rapidly. Morons abound. These are the same people who must have their Starbucks coffee every day. These math challenged boobs could defer buying a Starbucks coffee every day, save the $3, and accumulate $750 of emergency savings in one year.

Most Americans are one paycheck away from the street 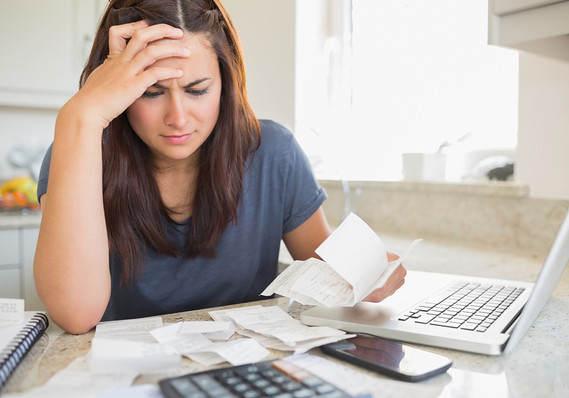 Most households struggle to cope with financial surprises.

Americans are starting 2016 with more job security, but most are still theoretically only one paycheck away from the street.

Approximately 63% of Americans have no emergency savings for things such as a $1,000 emergency room visit or a $500 car repair, according to a survey released Wednesday of 1,000 adults by personal finance website Bankrate.com, up slightly from 62% last year. Faced with an emergency, they say they would raise the money by reducing spending elsewhere (23%), borrowing from family and/or friends (15%) or using credit cards to bridge the gap (15%).

This lack of emergency savings could be a problem for millions of Americans. More than four in 10 Americans either experienced a major unexpected expense over the past 12 months or had an immediate family member who had an unexpected expense, Bankrate found. (The survey didn’t specify the impact of that expense.) “Without emergency savings, you may not have money to cover needed home repairs,” says Signe-Mary McKernan, senior fellow and economist at the Urban Institute, a nonprofit organization that focuses on social and economic policy. “Similarly, without emergency savings, people could raid their retirement account.”

The findings are strikingly similar to two other reports, one by the U.S. Federal Reserve survey of more than 4,000 adults released in 2014. “Savings are depleted for many households after the recession,” it found. Among those who had savings prior to 2008, 57% said they’d used up some or all of their savings in the Great Recession and its aftermath. And another survey of 1,000 adults released last year by personal finance website GOBankingRates.com found that most Americans (62%) have less than $1,000 in their savings account (although that doesn’t include retirement or other investment accounts).

Why aren’t people saving? Millions of Americans are struggling with student loans, medical bills and other debts, says Andrew Meadows, a San Francisco-based producer of “Broken Eggs,” a documentary about retirement. Central bankers hiked their short-term interest rate target last month to a range of 0.25% to 0.50% from near-zero, but that’s still a small return for savings left in bank accounts. Indeed, personal savings rates as a percentage of disposable income dropped from 11% in December 2012 to 4.6% in August 2015, according to the Bureau of Economic Analysis, and now hover at 5.5%.

More money and education can help. The latest Bankrate survey found that savings increased with income and education: Just 46% of the highest-income households ($75,000-plus per year) and 52% of college graduates lack enough savings to cover a $500 car repair or $1,000 emergency room visit. And while those figures could still be lower, Americans are willing to cut back on at least some expenses when money is tight: 58% say they’re “very/somewhat” likely to cut back on eating out, are likely to decrease their cable bill and 41% are likely to spend less on coffee at places like Starbucks, while 39% will seek out lower-cost cellphone bills.

But while unemployment is falling (5% in November 2015 versus 5.8% in November 2014) and the Affordable Care Act has given an estimated 16.4 million people access to medical care, the amount of wealth held by the middle class is shrinking. The share of income held by middle-income families has plunged to 43% of households in 2015 versus 62% in 1970, according to a report released last month by the nonprofit think tank Pew Research Center in Washington, D.C.

There are millions of brain dead Americans who are going to reap a whirlwind of consequences when this shit show implodes. They’ll be wailing and gnashing their teeth when their years of living for today catches up to them. Too fucking bad. The only way to accumulate wealth is to spend less than you make. It’s a lesson they failed to heed, and they will regret it for the rest of their pitiful lives.