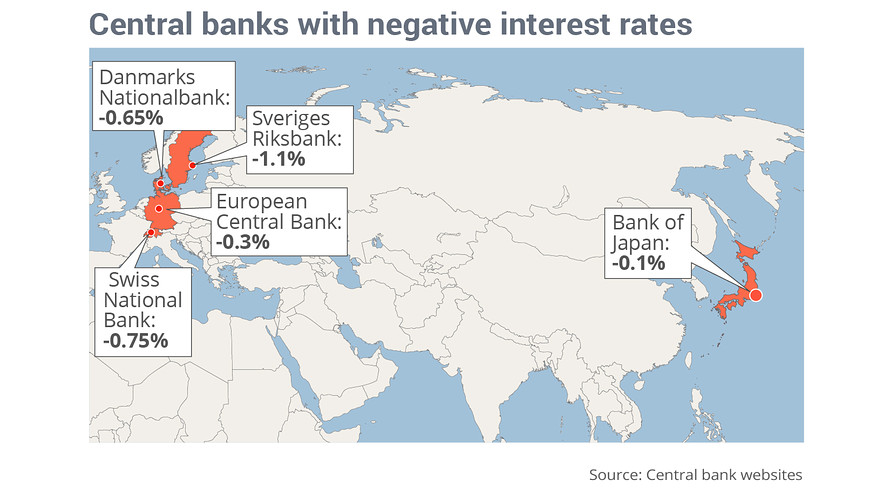 Indeed, more than a fifth of the world's GDP is now covered by a central bank with negative interest rates.

TOKYO—Japan’s central bank stunned the markets Friday by setting the country’s first negative interest rates, in a desperate attempt to keep the economy from sliding back into the stagnation that has dogged it for much of the last two decades.

The country is desperate to increase spending and investment.

Japan has been desperate to boost consumer spending for years. At one point it even issued shopping vouchers to stimulate demand.

Moving to negative rates reflects a measure of desperation on the part of central banks. Their traditional tools have been largely exhausted, as most countries’ interest rates have been pushed to almost nothing.

This might not be the sort of capitulation stock-market investors were anticipating.

The Bank of Japan’s surprise decision Friday to start charging depositors for parking excess reserves at the central bank triggered a global equity rally. But several monetary policy watchers and market strategists worried that the move was an acknowledgment that the world’s central banks are running out of ammunition in the battle against deflation.

“This is an interesting move that looks a lot more like desperation or novelty than it looks like a program meant to make a real difference,” said Robert Brusca, chief economist at FAO Economics.

Kit Juckes, global macro strategist at Société Générale, underlined the moment in a note to clients:

“First of all, forget the details, feed on the symbolism. Germany, Switzerland and Japan, the three great current account powers of the post-Bretton Woods era, whose surpluses have financed the frivolity of baby boomer Anglo-Saxons, are being told in no uncertain terms to stop saving.”

Whether the strategy works or not is less important than what the decision says about global disinflationary forces, he said, which have forced the central banks to “set off on this path…following a trail of breadcrumbs as they head for the gingerbread house.”

But others worry that the move underlines a degree of desperation and a sense that the asset purchases at the heart of global quantitative-easing strategies are running up against some important limits.

Daiwa economists and others expect the Bank of Japan to remain under pressure to ease further. And when push comes to shove, the bank will be likely to push rates further into negative territory rather than ramp up asset purchases.

“Ultimately, negative interest rates from a veteran of monetary expansion such as the BOJ mark a capitulation about the effectiveness of QE alone as an inflation-targeting tool in world of lingering growth-debt imbalances and commodity price wars,” said Lena Komileva, economist at G-plus Economics, in emailed comments.

Banks will presumably move their deposit rates below zero in response ….

Likewise, Bloomberg previously noted of the initiation of negative rates in the EU:

Negative interest rates are a sign of desperation, a signal that traditional policy options have proved ineffective and new limits need to be explored. They punish banks that hoard cash instead of extending loans to businesses or to weaker lenders.

And negative rates will eventually come to America.

Central bankers are implementing negative interest rates to force savers to buy assets … so as to artificially stimulate the economy. Specifically:

A negative interest rate means the central bank and perhaps private banks will charge negative interest: instead of receiving money on deposits, depositors must pay regularly to keep their money with the bank. This is intended to incentivize banks to lend money more freely and businesses and individuals to invest, lend, and spend money rather than pay a fee to keep it safe.

Next up: The war on cash.

Postscript: Ironically, the Fed has gone to great lengths to DISCOURAGE banks from lending to Main Street.