The Global Oil Glut Is So Great, Tankers Take The Long Route Around Africa To Find A Buyer

While we have previously observed the massive glut of oil product in the US, which has led to such arcane developments as a "parking lot" of oil tankers outside of Galveston, TX...

... or ships loaded to the brim with crude making U-turns in the middle of the Atlantic Ocean, taking advantage of the supercontango while unable to find buyers...

... we can now say that things in Europe are just as bad, if not worse. According to the latest "This week in petroleum" blog post by the EIA, European distillate oversupply has results in floating storage and shipping changes, such as tankers taking the long route around Africa (40 days vs 20 days), because they are unable to find a buyer and hoping that demand will spike while ships are at sea. So far demand continues to plunge even as more and more supply comes online.

Europe, like the U.S. East Coast, is experiencing a relatively warm winter. In addition to the resulting weak winter heating demand, high refinery runs in Europe and increased imports have kept distillate inventories in the Amsterdam, Rotterdam, and Antwerp (ARA) area far above normal. Higher inventories have pushed distillate futures prices in the ARA into a steep contango (meaning prices for delivery dates further in the future are higher than for near-month delivery). As a result, inventories are being held in floating storage and imported cargos are being diverted to longer voyages.

At the same time, new and traditional sources of distillate have expanded capacity to supply ultra-low sulfur distillate (ULSD) to Europe. In Russia, which is a longtime supplier of distillate to Europe, refineries have been upgraded to produce lower-sulfur distillate fuels that are widely used in Western Europe, and have increased exports to Europe. Elsewhere, several new refineries, including those in Saudi Arabia and India, which are geared toward maximizing ULSD output, have come online in the past few years, further adding to the supply of distillate. 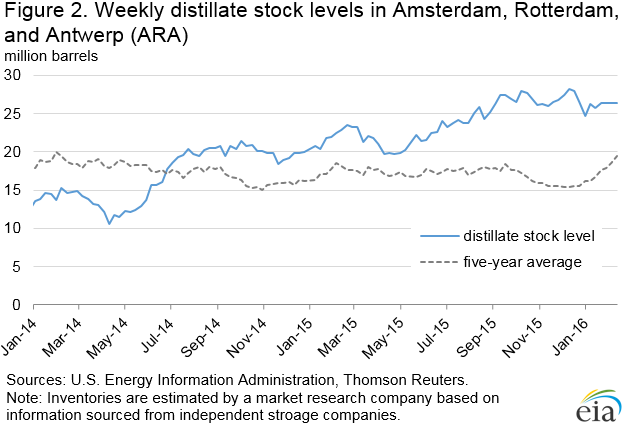 The ARA is the delivery point for the Intercontinental Exchange (ICE) gasoil (distillate) futures contract. Consistently high distillate inventories in the ARA have pushed prices lower and ICE gasoil futures into a steep contango. The futures spread between the prompt month ICE gasoil contract and the contract for 12 months forward was $8.90 per barrel contango in January (Figure 3). 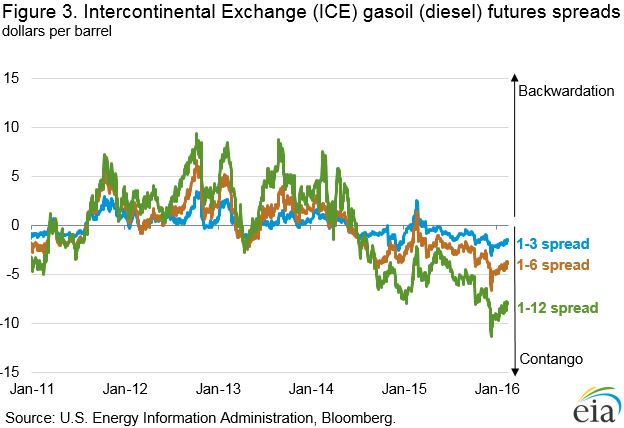 Trade press reports indicate that a lack of storage space and a large contango have pushed distillate supplies into floating storage and encouraged import cargoes to take longer shipping routes. When contango in the futures contracts become sufficiently large, market participants can lock in a profit by purchasing distillate supplies on the spot market, chartering a vessel, and selling a longer-dated futures contract.

Trade press report that several vessels in European waters, such as off the coast of Gibraltar in southern Spain and outside of the ARA ports, have been booked specifically for distillate floating storage.

Another tactic employed by market participants is to have inbound cargoes take longer voyages, which allows more time to find a buyer, or onshore storage space, and also provides a return from the higher priced later delivery date.

According to the trade press, many cargoes from the Middle East and India have diverted around the Cape of Agulhas, at the southernmost point of Africa, on their way to Europe rather than passing through the Suez Canal in Egypt. The longer trip takes 30-40 days instead of the 15-20 day journey through the Suez Canal (Figure 4). 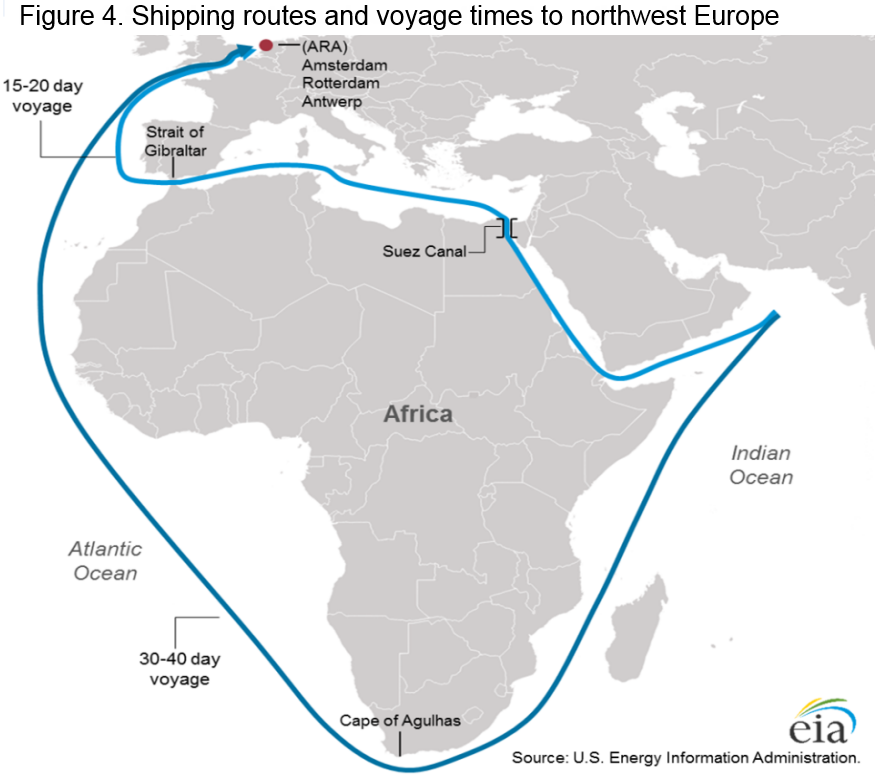