Submitted by Koos Jansen via AllChinaReview.com,

To challenge the US dollar hegemony and increase its power in the global realm of finance, China has a potent gold strategy. Whilst the State Council is preparing itself for the inevitable decay of the current international monetary system, it has firmly embraced gold in its economy. With a staggering pace the government has developed the Chinese domestic gold market, stimulated private gold accumulation and increased its official gold reserves in order to ensure financial stability and support the internationalisation of the renminbi.

Quote from Governor of the PBOC Zhou Xiaochuan 2009.

In the present zeitgeist we find ourselves on the verge of a shift in the global monetary order. The shocks through the financial complex in 2008 that reaffirmed the innate fragility of the US dollar as the world reserve currency have sparked China to become a vocal proponent of de-Americanization, although its end goal is communicated less clearly. Being the second largest economy of the world but relatively in arrears regarding physical gold reserves, China has a strong motive to surreptitiously work on its gold program until completion. For, if it would be candid in its gold ambitions, the price would significantly run higher, potentially disturbing financial markets and narrowing its window of opportunity to prepare for the next phase.

China has been infatuated with gold for thousands of years. In the mainland, gold mining and use can be traced back to at least 4,000 years ago, and the metal has always represented economic strength and was regarded as the emperors’ symbol of power. Although the Communist Party of China captured the monopoly in gold trade and heavily restricted private gold possession since 1949, in lockstep with the gradual liberalisation and the ascend of the Chinese economy the state started to develop the domestic gold market in the late seventies, which accelerated in 2002.

A new page was turned when the Gold Armed Police started operating in 1979, not coincidentally a few years after the US detached its dollar, the world reserve currency, from gold. This army division was initially assigned to gold mining exploration and has done so quite fruitfully. Since 1979, Chinese domestic mining output has grown 2,137 % from an annual 20 tonnes to an estimated 467 tonnes in 2015. In 1982, the first steps were taken in reviving China’s gold retail channels. For the first time since 1949 people were allowed to buy jewelry and the China Gold Coin Incorporation started issuing Panda coins. The Peoples Bank Of China (PBOC) continued to be the primary gold dealer that fixed the price and controlled all supply flows.

The real reform of the Chinese gold market was implemented on 30 October 2002 by the launch of the Shanghai Gold Exchange, erected to serve the full liberalisation of the domestic gold market. From that date the fixing of the gold price in China was transmitted from the PBOC to the free market. In 2004, the State Council approved gold as an investment for individuals and the PBOC slowly repelled control over supply flows. The Chinese gold market fiercely rose from its ashes. By 2007 the market was functioning as intended when nearly all gold supply and demand was flowing through the SGE system6. A year later, in 2008, the Shanghai Futures Exchange launched a gold futures contract supplementing existing derivatives at the SGE.

The Shanghai Gold Exchange (SGE), which is a subsidiary of the PBOC, is the very core of the Chinese physical gold market. Its infrastructure provides a single liquid exchange overseen by the state, granting all participants a trusty venue that can be efficiently developed and monitored. The mechanics of the Chinese market incentivise nearly all supply and demand to connect within the SGE system. As a consequence, by the amount of gold withdrawn from the vaults of the SGE – data that was published up until December 2015 in the Chinese Market Data Weekly Reports – we could gauge Chinese wholesale gold demand.

After the crisis in 2008, it became apparent in the higher echelons of the Chinese government that the development of the gold market and private accumulation had to accelerate to protect the Chinese economy from looming turmoil. Through state owned banks and media wires the citizenry were stimulated to diversify savings into physical gold. Currently, at Chinese banks, numerous gold saving programs can be entered into, or individuals can open an SGE account and purchase gold directly in the wholesale market.

“Individual investment demand is an important component of China’s gold reserve system, …. Practice shows that gold possession by citizens is an effective supplement to official reserves and is essential for our national financial security.”

Quote by the President of the China Gold Association 2012.

When the gold price came down sharply in April 2013, Chinese gold demand literally exploded as in a once in a lifetime event. In between 22 and 26 April, 117 tonnes of physical gold were withdrawn from the vaults of the SGE. 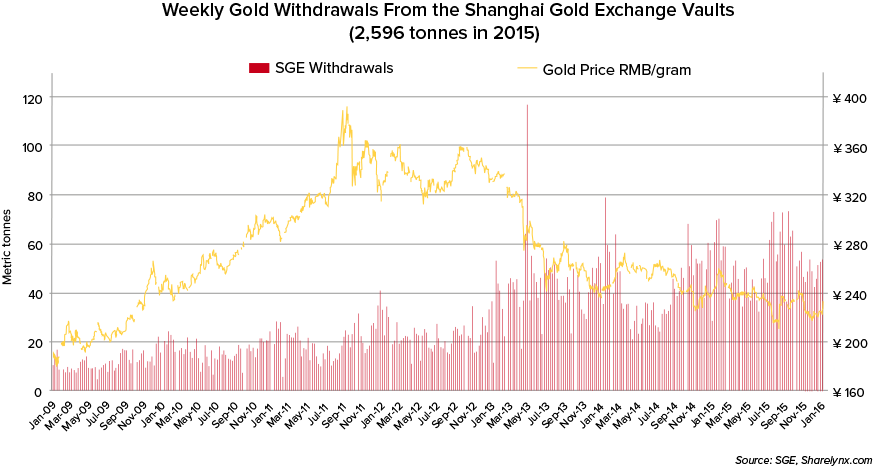 China has been a gigantic gold buyer ever since. Withdrawals from the vaults of the SGE in 2015 accounted for 2,596 tonnes (90 % of global annual mine output), up from a mere 16 tonnes in 2002. SGE withdrawal data correlates with elevated gold import by China.

Whilst clearly enjoying their bargain purchases, China has established a trend of increasingly obfuscating the true size of its gold demand. Not long ago several reports were released in the mainland that disclosed total gold demand to be the equivalent to SGE withdrawals. Since 2012 these reports have been hidden from public eyes and in January 2016 the SGE ceased publishing withdrawal data10. Although annual SGE withdrawals have exceeded 2,100 tonnes since 2013, what is generally publicised as gold demand is roughly half of this, merely the demand at jewelry shops and banks that excludes direct purchases from individual and institutional clients at the SGE. As a result, the global consensus is that Chinese gold demand is approximately 1,000 tonnes a year though in reality it’s twice this volume.

To free itself from US dollar supremacy and force the sequent monetary system, China’s goal is to internationalise the renminbi. For achieving its target, gold is identified as the key. It is the absolute monetary asset to support the renminbi, the dollars’ Achilles heel and a hedge during monetary stress. Next to the swift progression in the Chinese private gold market we can observe the PBOC is covertly buying gold and has launched the Shanghai International Gold Exchange to prepare renminbi internationalisation.

“For China the strategic mission of gold lies in the support of renminbi internationalization, and so let China become a world economic power…. Gold is both a very honest asset and forms the very material basis for modern fiat currencies…. Gold is the world’s only monetary asset that has no counter party risk, and is the only cross-nation, cross-language … and cross-culture globally recognized monetary asset.

That is why in order for gold to fulfill its destined mission, we must raise our gold holdings a great deal, and do so with a solid plan. Step one should take us to the 4,000 tonnes mark, more than Germany and become number two in the world, next, we should increase step by step towards 8,500 tonnes, more than the US.”

Quote by the President of the China Gold Association 2014.

Not surprisingly, China’s strategy is everything but linear. Let us analyse the State Council’s most recent actions with respect to gold and the internationalisation of the renminbi. In addition to gold accumulation, the State Council has aimed to kick start renminbi internationalisation by having it included into the International Monetary Fund’s (IMF) basket of currencies, the Special Drawing Rights (SDR), in 2015. For acceptance, the IMF required openness of China’s international reserves, of which the PBOC hadn’t updated its gold reserves since 2009. Here we found the PBOC stretched between opposing forces; it obviously preferred to hoard gold in concealment not to disturb financial markets, while at the same time it was requested to open its books. In July 2015 the PBOC decided to revise its official gold reserves by 604 tonnes to 1,658 tonnes, which was probably not the whole truth but served both means, as markets barely reacted to the increment – the gold price has not increased since then – and the IMF has granted annexation of the renminbi into the SDR.

How much gold does the PBOC truly hold? Before we make an estimate we must first address the question, how and where does the PBOC buy gold? Some analysts assume the PBOC buys gold in the domestic market at the SGE. According to my research this is not true. My sources in the bullion industry tell me first hand that the PBOC buys gold in the international OTC market using Chinese banks as proxies. And this intelligence fits into the wider analysis, as there are many reasons why the PBOC would not buy gold through the SGE.

A rough estimate suggests the PBOC holds nearly 4,000 tonnes in gold reserves, more than twice the amount they officially disclose. In a quest for any clues we must visit the heart of the gold wholesale market. Data by the London Bullion Market Association points out there have been approximately 1,700 tonnes of monetary gold exported from London between 2011 and 2015. China’s central bank is the foremost suspect for these purchases, given its size and motives, and the tonnage exported from London is consistent with other sources that state the PBOC has bought roughly 500 tonnes a years since 2009. All clues together point to the PBOC holding roughly 4,000 tonnes currently. Although this remains speculation.

More of China’s gold strategy was revealed by the recent launch of the Shanghai International Gold Exchange (SGEI) that offers gold trading in renminbi for clients worldwide, in an attempt by China to strengthen the internationalisation of the renminbi. In itself the SGEI clearly underlines China’s gold ambitions16, but the punch line was added with the launch of the Silk Road Gold Fund in 201517. Led by the SGE(I), the $16 billion fund will boost the gold industry along the Silk Road and in turn “will facilitate gold purchases for the central banks of member states to increase their holdings of the precious metal”, according to the Chinese state press agency Xinhua18. Not only is China trying to persuade all mining and consumption of gold along the Silk Road economic project to be settled through the SGEI in renminbi, additionally the Chinese promote gold as an essential component of central banks’ international reserves going forward.

We must conclude that the State Council views gold as part of the coming international monetary system. Why else does it quickly develop the domestic gold market to be embedded in financial markets, surreptitiously accumulate vast gold reserves and establish a framework to boost gold business on the Eurasian continent around the SGEI? In my view, China contributes significant value to its gold strategy in the shadow of the apparent failure of the current fiat monetary system. And if true, China’s central bank having nearly 4,000 tonnes of gold is well on its way to introduce the next phase.