6 Charts That Show the Global Demographic Crisis Is Unfolding

The world is undergoing a profound demographic shift that will cause sweeping changes over the next few decades.

Those changes will broaden the scope of our study of economics and investing; they will alter our understanding of sociology; and they will radically affect politics and governments.

Precisely what these changes will be is difficult to discern and predicting them requires some guesswork, but the one thing we don’t have to guess about is the demographic shift itself.

The world’s population could reach 14 billion by 2100 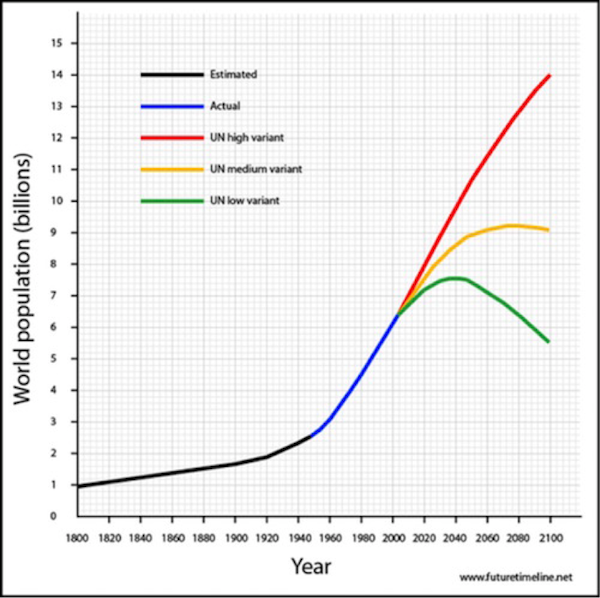 Experts think human population could fall to 6 billion or hit 14 billion until the end of this century. The gap is that wide because demographic projections require many assumptions. Small changes can combine to make a dramatic difference over time.

The late 20th century acceleration in population growth was mainly a result of modern vaccinations. Other technologies could have—and I think will have—similar impacts in the future.

Technology can cut the other way, too. We now have the capacity to wipe out entire nations with nuclear weapons. Some scientists think our excessive antibiotic use will create drug-resistant superbugs that could kill millions. I don’t expect such events, but we can’t rule them out, either.

For now, we are at least reproducing faster than we are dying. The result is a growing global population, which masks another problem.

Populations are shrinking in much of the developed world

If the global population is on the rise, it doesn’t mean it’s growing at the same rate in every country, or even growing at all.

We find the highest growth rates, for example, in sub-Saharan Africa and parts of the Middle East. The lowest growth is in Eastern Europe, Russia, China, and Japan.

Notice the countries shown in shades of blue below. They are actually shrinking in population. 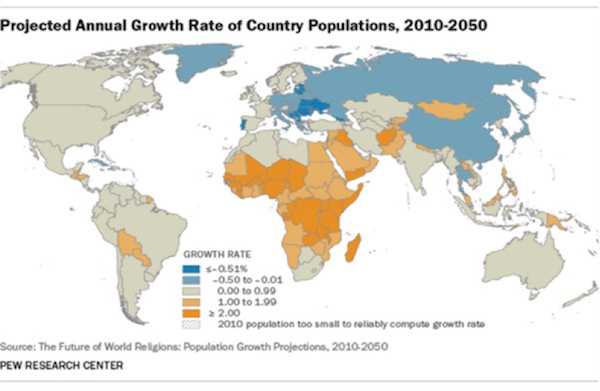 If you want your nation’s population to grow, you need a higher fertility rate and/or longer life expectancy. Africa has both factors on its side, though fertility rates are beginning to decline there, too.

Falling fertility rates and longer lifespans mean that the global population is getting older. This will bring something remarkable in the next few years: the world will soon have more people over age 65 than it has children under 5. 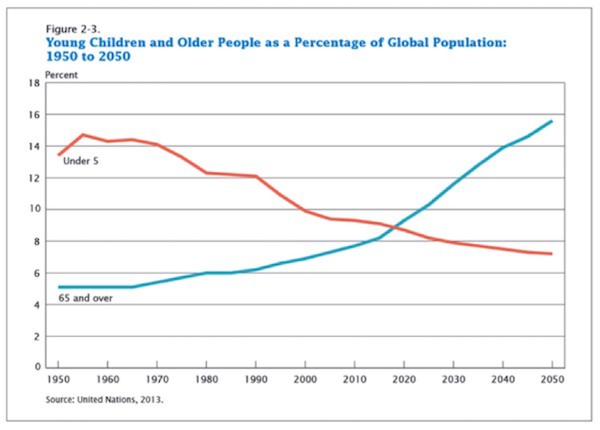 You can see in the chart that the elderly population is growing much faster than the child population is shrinking. As our ability to extend lifespans grows, the disparity between these populations will get worse.

Who will support children and the elderly?

The aging population dynamic means we will have fewer younger people supporting a larger number of older people. Don’t forget that children need care, too. So the real problem will be lack of middle-aged people to support both children and the elderly.

Here is another chart from the “Aging World” report: 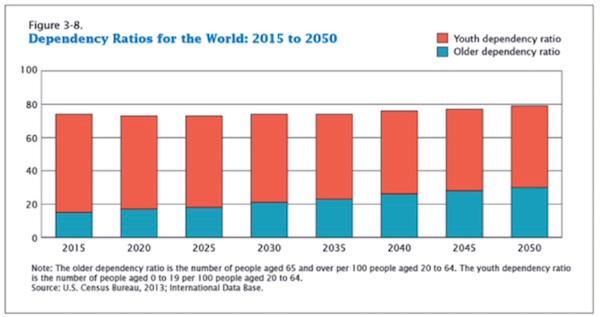 For every 100 working-age (20-64) people, there will be almost 80 children and retirees who will require support by 2050. That sounds bad, but notice how little the ratio actually changes from now until then.

The global data, however, doesn’t reveal the real scale of this issue because we haven’t arranged ourselves on the planet in neat, homogeneous groups.

In fact, most of the children are going to be in Africa and the arc around the Indian Ocean, while most of the retirees will cluster in the developed world and China.

China’s one-child policy has created an ugly, upside-down pyramid. Each worker in that generation could end up supporting two parents, four grandparents, and perhaps one or more children, too.

The demographic reality is that the working-age Chinese population almost literally falls off a cliff starting in the next few years.

Here’s a chart that shows working-age numbers in China… 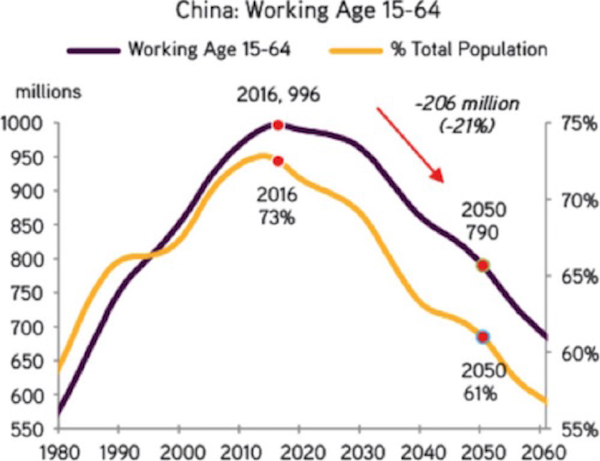 … and another chart showing China as compared to the US, Japan, Ireland, and Spain. 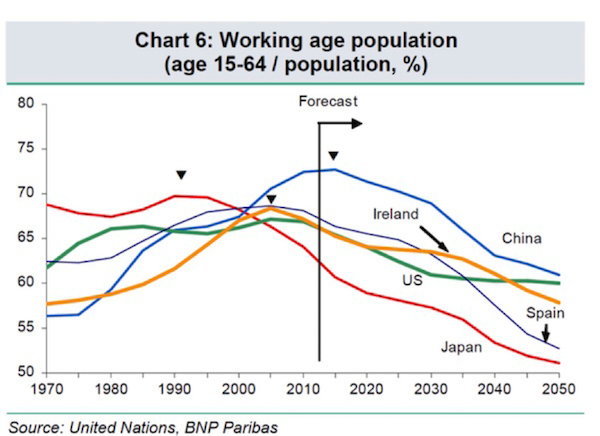 Notice that China still has a higher percentage of working-age people than the other countries do, but these other countries grew relatively rich before they growing old. China does not have a Social Security program or anything like the safety nets common in the developed world.

None of this is good news for either China or the rest of the world. The aging of the world’s population is becoming a vast global issue that will affect multiple domains and shape the world in the coming decades. It is already having profound effects on the global economy, and it’s just getting started…