By Wolf Richter of Wolf Street

Freight shipments by truck and rail in the US fell 4.9% in April from the beaten-down levels of April 2015, according to the Cass Transportation Index, released on Friday. It was the worst April since 2010, which followed the worst March since 2010. In fact, shipment volume over the four months this year was the worst since 2010.

This is no longer statistical “noise” that can easily be brushed off.

The Cass Freight Index is based on “more than $26 billion” in annual freight transactions by “hundreds of large shippers,” regardless of mode of transportation, including by truck and rail. It does not cover bulk commodities, such as oil and coal and thus is not impacted by the collapsing oil and coal shipments. The index is focused on consumer packaged goods, food, automotive, chemical, OEM, heavy equipment, and retail.

In a similar vein, the Association of American Railroads reported last week that loads of containers and trailers fell 7.5% in April year-over-year. “Intermodal” is a direct competitor to trucking. Combined, they’re a measure of the goods-based economy.

The Cass Freight Index is not seasonally adjusted. Hence the strong seasonal patterns in the chart. Note the beaten-down first four months of 2016 (red line): 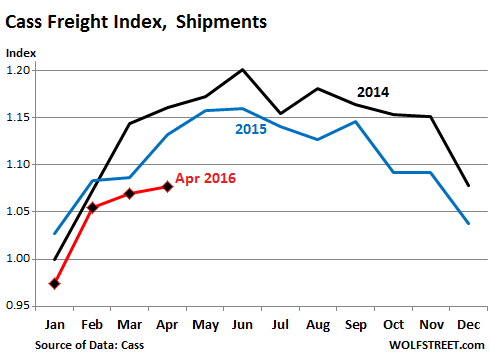 And May is not going to look much better. The report:

May is usually a relatively strong month for freight shipments, but given the high inventories with ever slower turnover rates and the decline in new production orders, May could be another soft month.

As a result, the crucial inventory-to-sales ratio, which tracks how long unsold inventories sit around and gather dust, has blown out to the same crisis level it had spiked to following the Lehman bankruptcy: 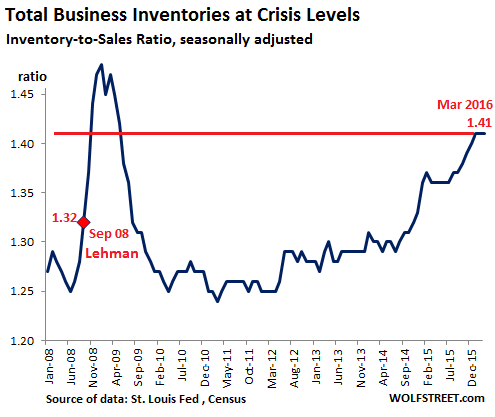 With sales down and inventories very high, businesses are trimming their orders to bring inventories back in line, and this is impacting the transportation industry.

Due to falling volume and “very soft rates,” as the report puts it, shippers have spent 8.3% less in April than a year ago, the lowest April spend since 2011. “With ample capacity available across the modes, competition for loads is holding rates down,” the report explains.

Transportation data provider DAT looks at this from the truckers’ point of view. It tracks national spot-market demand for trucks and availability of trucks via its load-to-truck ratio – “a sensitive real-time indicator” of the balance between the two. And the spot market for the largest category, van-type trailers has become ugly: Last month, the load-to-truck ratio for vans plunged 46% from April 2015, and 52% from April 2014. It has been terrible all year (red line): 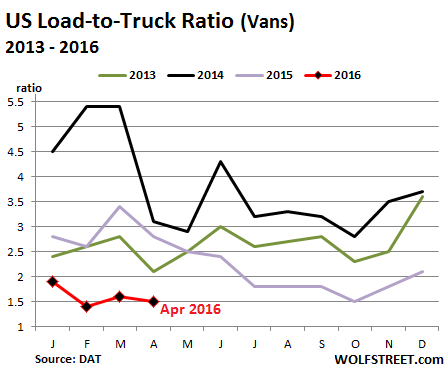 Cass notes that the economy “decelerated in the first four months of 2016.” And this “slowdown,” the report said, was caused by:

Which aptly summarizes much of what troubles the US economy. And the current data doesn’t leave much room for any excess optimism:

Eyes are on the Chinese economy, which has been extremely unstable and can have a big effect on world economies if it continues to falter. Based on the trends of many economic indicators, it appears the economy may get worse before it gets better.