Somewhere back in the depths of time the world got the idea that easy money — that is, low interest rates and high levels of government spending — would produce sustainable growth with modest but positive inflation. And for a while it seemed to work.

But that was an illusion. What actually happened was textbook, long-term, surreally-vast misallocation of capital in which individuals, companies and governments were fooled into thinking that adding new factories, stores and infrastructure at a rate several times that of population growth would somehow work out for the best.

China, as with so many other things, was the epicenter of this delusion. In response to the 2008-2009 financial crisis it borrowed more money than any other country ever, and spent most of the proceeds on infrastructure and basic industry. It’s steel-making capacity, already huge by 2008, kept growing right through the Great Recession, and now dwarfs that of any other country. 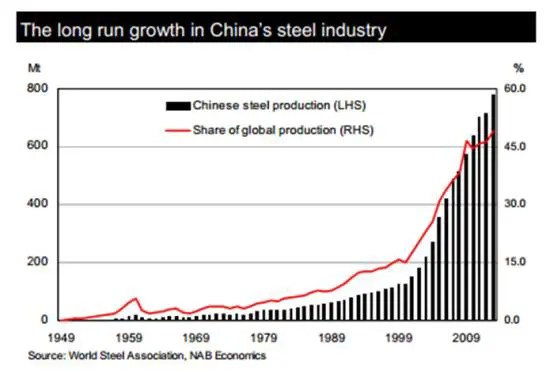 The result was indeed higher prices for iron ore and finished steel up front (that is, the inflation the architects of the easy money era expected and desired). But this was soon followed by falling prices as the rest of the world’s steel makers tried to stay in the game. 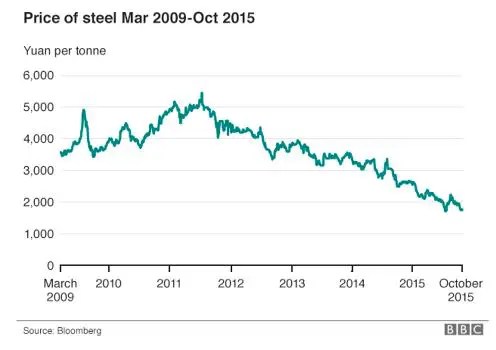 It’s the same story pretty much everywhere. Miners that produced the raw materials for the infrastructure/industrial build-out started projects based on inflated price projections and now have no choice but to keep producing to cover variable costs and avoid bankruptcy. Prices of virtually every commodity have as a result plunged.

In the US, retailers built new stores at a pace that vastly exceeded population growth, apparently on the assumption that consumers would keep borrowing in order to buy ever-greater amounts of semi-useless stuff. And now bricks and mortar retailing is suffering a mass-die-off. 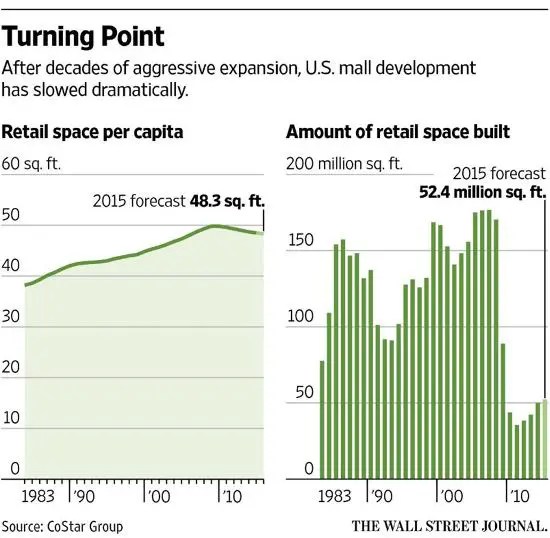 Even cheese, of all things, is in a potentially disastrous glut:

Let’s Brie Honest: The Entire World Is Awash in Cheese

(Wall Street Journal) Yes, fattened cows, excess milk production and a strong dollar have helped U.S. stockpiles of cheese grow to unprecedented levels. But the great American cheese glut is also getting a boost from overseas.

Even as U.S. sales have fallen abroad due to a relatively strong dollar, a glut of production along with the weakening of currencies in dairy producing regions, has increased imports of cheese to the United States from Europe, New Zealand and Canada.

Milk production from the top seven exporting regions continues to increase, albeit at a much slower pace compared to when the expansion first began in 2014, Gregg Tanner, chief executive of dairy giant Dean Foods said in a February earnings call. The European Union is the largest contributor as milk production there has increased by more than 5% year-over-year since the elimination of milk quotas the end of March last year.

This adds up to good news for the cheese adventurous.

A typically hard-to-find exotic cheese from farflung New Zealand that normally sells for $8 a pound recently showed up across the street from Tom Bailey’s house, haphazardly packaged and selling for $5 a pound. He snatched it up.

“They’re just trying to clear this stuff,” said Mr. Bailey, a senior dairy analyst at Rabobank International in New York. “You might see some cheeses you haven’t seen before.”

What does this mean? Several things:

Cheap money sends a “borrow and spend me” signal to the markets, just as expensive money (i.e., high interest rates and government surpluses) says “save and invest me”. So when money is made artificially cheap by cluelessly expansionist governments, it leads people to overborrow and overbuild.

The resulting overcapacity leads to price cuts as marginal producers sell for whatever they can get just to keep the lights on. Falling prices for individual products in the aggregate create systemic deflation. In other words, we’re getting exactly what we should have expected from “inflationary” policies — which is deflation.

The next stage of this process will be either:

The mass failure of marginal players in virtually every basic field. Steel mills, cement factories, shopping malls, high-cost miners, dairy farms, etc., etc., will default on their debt, fire their workers and liquidate their assets, leading to a global depression in which deflation exceeds the 25% seen in the 1930s.

Mass devaluation in which the world’s governments lower the value of their currencies to make their debts survivable. This will, of course, scream “borrow and spend me before I lose even more value” to the markets, thus increasing systemic leverage and producing an even bigger bust somewhere in the future.

We’re clearly opening door number two, so the volatility of the coming decade should put today’s uncertainties to shame.

In both scenarios, real cash, i.e., gold, is king. In the Great Depression, things got cheaper, which made life easier and more fun for people with money. During times of currency devaluation, gold soars in local currency terms — and life gets easier and more fun for the metal’s owners. So either way, owning sound money (as opposed to euros, dollars, yen or yuan) is one part of a plan to survive what’s coming.