Despite what should have been a once in lifetime lesson from 2005 through 2010 on the dangers of excessive leverage, dumbass Americans have been led like sheep to slaughter again by the Wall Street cabal, Madison Avenue maggots, and the mega-corporate purveyors of materialism. Wall Street is issuing more credit cards today than they did at the 2008 peak, and 90% more than they did in 2009. 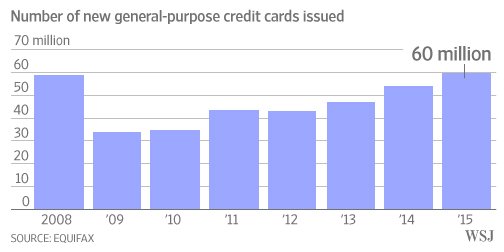 The automakers, their finance divisions, and Wall Street have “sold” a new $40,000 vehicle to every Tom, Dick, and Lakesha in Amurica with subprime loans, 7 year 0% interest “deals”, and low payment leases. Now, tens of millions of these dumbasses are underwater on their auto loans. But wait. These people are so fucking stupid they NEED a new vehicle and are trading in their underwater 3 year old vehicles for another $40,000 ride. Gotta keep up with the Joneses. Just roll the old loan into the new loan and drive off the lot underwater from the get go. Simply brilliant. Meanwhile, auto loan delinquencies are soaring.

The idiocy of people taking on this level of debt once again, so they can pretend to live the good life, is mind boggling to behold by rational thinking individuals. The decay and rot of this unsustainable system is clear and the stench from our fetid putrefying carcass of a faux democracy is overwhelming.

Two quotes come to mind when you see mindless Americans in action in this great democracy of ours.

“Democracy is the theory that the common people know what they want and deserve to get it good and hard.” – Mencken

“Think of how stupid the average person is, and realize half of them are stupider than that.” – Carlin