How Companies 'Collaborate' to Rip Off and Get Rid of Workers 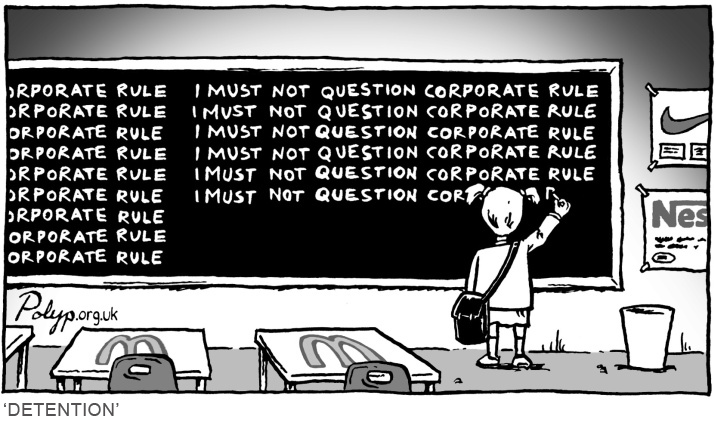 We occasionally cover some of the odd and weird phenomenons in the current corporate America. We are going to categorize them as Workplace NWO (NWO = New World Order). Here is the latest we've observed.

The current prevalent corporate slogan is 'team work' and problem solving, decision-making through 'collaborative effort'. On the surface, this represents a healthy evolution of workplace process, like the old saying goes 'Two brains are better than one".

However, in our previous post we noted how PIP (Performance Improvement Plan) has become a popular tool used by the new generation of less experienced managers to get rid of high performance, more experienced, 'black horse' employees who do not fit into an otherwise mediocre 'team'. In addition to PIP, there's another way to still rip the benefit, so to speak, of such employee (after all, you can't put every such employee on PIP) under the cloak of 'collaboration'.

Read: How Companies Are Using PIP to Humiliate and Get Rid of Workers

Cool, You Got A Project That Nobody Else Can Deliver

In this situation, the high performance 'black horse' employee is typically given a challenging project or task that nobody else in the 'team' is capable of delivering. The project usually requires recurring deliverable, that is, it is not something you do it one time and leave.

At first glace, this seems to demonstrate manager's confidence as well as confirmation in this employee's skills and capabilities. So this more experienced and high performance 'black horse' employee gets a morale boost and works hard on the project. The project eventually gets completed with resulting compliments even from higher-ups. A job well done and this employee gets some deserving recognition, everything seems fair and square, right? Not so fast.

Collaborate to Rip Off

As mention before, this is a recurring project. Usually, the most difficult part is to establish a sustainable and repeatable process for product creation and delivery on schedule each and every time. In a more traditional workplace, the recurring portion of the project should also fall under the initial project leader and creator (in this case, the 'black horse' employee) to continue managing the ongoing process and deliverable. However, in the 'modern' corporate workplace dominated by Gen X and millennial, nothing is done with rules based on standard moral compass any more.

Read: How Some Companies Are Scamming Job Applicants

What typically happens is that as soon as the project gets some 'credibility' and 'buzz' (mostly on the back of that 'black horse' employee), the manager goes 'let's use the collaborative approach' and distributes project ownership part and parcel to other junior and mediocre 'team members'. After all, following and imitating (an established process) is much easier than creating.

Lead a Project without Ownership

This means this 'black horse' employee is still the 'project leader' responsible and accountable for the project outcome, but does not have true project ownership any more. You might ask what is the purpose of the manager doing so? Well, for one thing, the 'black horse' employee is still the 'project leader', so he or she has to do a lot of work mopping up after other 'team members'. If anything goes wrong, which most likely will, the blame is on the project leader. Secondly, since the initial project leader has established credibility, other team members who now become part project owner are able to ride on that coat tail and may get away with inferior product delivery. A third reason is that every team member gets a bite out of the sweet successful project pie instead of the out-of-favor 'black horse' employee getting all the glory.

The story usually does not end there. There will always be another difficult project, and again it will be assigned to the 'black horse' employee and then be taken away just like so. This high-performance and hard-to-terminate employee most likely will not get much benefit on the performance review since most of his or her achievement has now morphed into the 'collaborative effort" of the team.

Of course, all other team members support and love how manager is looking out for their 'personal development'. What's not to like when somebody else does the heavy lifting and you get to share the credit and glory regardless how little contribution you have made? And since we are in a distorted democratic society where majority rules regardless of logic or moral standard, this could go on forever with support and approval from seemingly everywhere. The only 'victim' is the 'black horse' employee who is constantly trying to rein in project quality control behind the scene without a fair share of the credit due.

But At Whose Expense?

What is very likely going to take place is that those other relatively mediocre 'team members' get noticed or even moved up in positions due to the 'contribution' and 'collaborative' work of a few high-visibility projects, while the real brain behind these projects will never move up or go anywhere. Eventually, this high performance, hard-to-terminate employee gets so frustrated and moves on to a new job at a different company.

'More Bang for the Buck'

Similar to PIP, this ripoff disguising as 'collaboration' is something that emerged in corporate America within the past 5-10 years, and also has become part of the standard operating procedure for the new generation of middle managers.

Both achieve the same goal - getting rid of a worker disharmonious to the 'team' but otherwise hard to terminate based on performance alone. The difference is that PIP leaves a paper trail in HR records with some legal risk, whereas 'collaborate to rip off' is much more subtle and stealthy while getting more bang for the buck, figuratively speaking, plus zero risk of a law suit.

In my view, there's really nothing significantly unreasonable with PIP or the 'Collaborative Approach"; however, the problem lies squarely with how they are implemented by the new breed of middle managers after the Boomer generation.

The post-boomer new generation middle managers tend to have a heightened sense of self-entitlement and like to rely on standardization as a managerial skill. That is, their main goal in managing people is to have a 'group-think-and-act' team with similar degree of inexperience. So these managers will not tolerate anyone who does not fit the preferred team mode. They also tend to register lower on the moral compass, and like to band together like a pack of wolves taking out 'obstacles' in the process of climbing the corporate ladder.

"It is madness for sheep to talk peace with a wolf."    ~ Thomas Fuller

I know some will argue that this is what Corporate America needs to compete in the global world against the emerging economies like China or S. Korea. I believe this is purely short-sighted and may see some short-term benefits, but in the longer term, Corporate America will lose out with these Workplace NWO.  Good luck, Corporate Sheep