Submitted by Michael Shedlock via MishTalk.com,

Economists figured the recovery would bring about increased confidence and a rise in the birth rate.

Instead, the rate dropped into a tie with the lowest birth rate on record.

This is yet another surprise for economists to ponder.

The newest official tally  from the National Center for Health Statistics showed an unexpected drop in the number of babies born in the U.S. in 2015. The report was a surprise: Demographers had generally expected the number of births to rise in 2015, as it had in 2014. Instead, the U.S. appears to still be stuck in something of an ongoing “baby bust” that started with the recession and housing collapse and has yet to reverse. 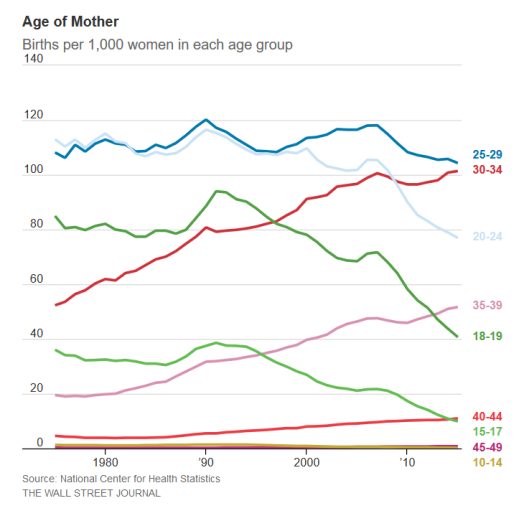 The Wall Street Journal concludes “There’s still good reason to believe the birth rate will pick up in coming years. After slumping for nearly a decade into the 1970s, births picked up in the 1980s and 1990s (giving us the generation known as millennials.) The most common age in America is 24 or 25, meaning there’s a very large cohort of these millennials who are about to hit the years that people are most likely to become parents.”

I fail to see why any economist should be surprised by this. A record number of millennials are living at home.

This is simply too obvious. So I have two questions:

Economists who could not figure any of this out now place their faith in the fact “a very large cohort of these millennials who are about to hit the years that people are most likely to become parents.”

...economists will still be wondering “what happened” years from now.