These 2 Forces Will Crush the San Francisco Housing Bubble

The San Francisco housing bubble – locally called “Housing Crisis” – needs a few things to be sustained forever, and that has been the plan, according to industry soothsayers: an endless influx of money from around the world via the startup boom that recycles that money into the local economy; endless and rapid growth of highly-paid jobs; and an endless influx of people to fill those jobs. That’s how the booms in the past have worked. And the subsequent busts have become legendary.

The current boom has worked that way too. And what a boom it was. Was – past tense because it’s over. And now jobs and the labor force itself are in decline.

Until recently, jobs and the labor force (the employed plus the unemployed who’re deemed by the quirks of statistics to be looking for a job) in San Francisco have been on a mind-bending surge. According to the California Employment Development Department (EDD):

This increase in employment put a lot of demand on housing. Low mortgage rates enabled the scheme. Investors from around the world piled into the market. And vacation rentals have taken off. As money was sloshing knee-deep through the streets, and many of the new jobs paid high salaries, the housing market went, to put it mildly, insane.

But the employment boom has peaked. Stories abound of startups that are laying off people or shutting down entirely. Some are going bankrupt. Others are redoing their business model to survive a little longer, and they’re not hiring. Old tech in the area has been laying off for months or years, such as HP or Yahoo in Silicon Valley, where many folks who live in San Francisco commute to.

The chart shows how the Civilian Labor Force (black line) and Civilian Employment (red line) soared from January 2010. As employment soared faster than the labor force, the gap between them – a measure of unemployment – narrowed sharply. But now both have run out of juice: 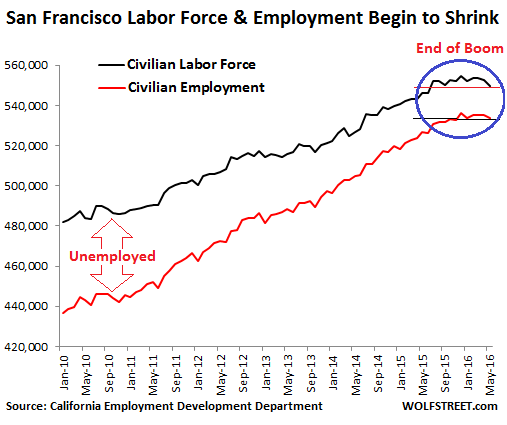 The workforce continued falling long past the bottom of employment. SF is too expensive for people without jobs to hang on for long. Eventually, they bailed out and went home or joined the Peace Corp or did something else. And this crushed the SF housing market.

But by the time the labor force bottomed out in May 2006 at 411,000, down 15% from its peak, the new housing boom was already well underway, powered by the pan-US housing bubble. In SF, this housing bubble peaked in November 2007 and then imploded spectacularly.

So now, even if employment in San Francisco doesn’t drop off as sharply as it did during the dotcom bust, in fact, even if employment and the labor force just languish in place, they will take down the insane housing bubble for a simple reason: with impeccable timing, a historic surge in new housing units is coming on the market.

According to the SF Planning Department, at the end of Q1, there were 63,444 housing units at various stages in the development pipeline, from “building permit filed” to “under construction.” Practically all of them are apartments or condos.

This chart shows that the development boom is not exhibiting any signs of tapering off. Planned units are entering the pipeline at a faster rate than completed units are leaving it; and the total number of units in the pipeline is still growing: 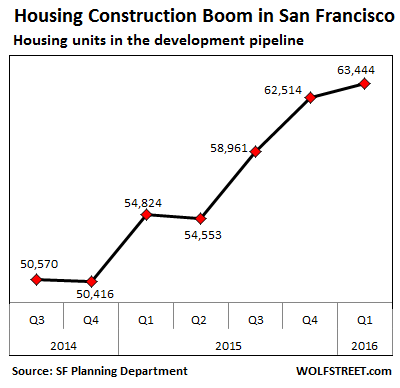 Many units will come on the market this year, on top of the thousands of units that have hit the market over the last two years. Once these 63,444 units are completed – if they ever get completed – they’ll increase the city’s existing housing stock of 382,000 units by over 16%.

If each unit is occupied by an average of 2.3 people, these new units would amount to housing for 145,000 people. This is in addition to the thousands of units that have recently been completed as a result of the current construction boom, many of which are now on the market, either as rentals or for sale.

This surge in new, mostly high-end units has created an epic condo glut that is pressuring the condo market, and rents too, to where mega-landlord Equity Residential issued an earnings warning in June, specifically blaming the pressures on rents in San Francisco (and in Manhattan).

Manhattan’s condo glut also has taken on epic proportions. Sales of apartments in the second quarter dropped 10% year-over-year, to the lowest since 2009. And condo prices plummeted 14.5% in 3 months. Ugly! Read…  It Gets Real: Manhattan Apartment Sales Plunge