Pretend you’re running a corrupt government and something big and scary happens in another part of the world. Brexit, for instance. You’re quite naturally worried about the impact on your local economy and political system. What do you do?

Well, one obvious thing would be to call the statisticians who compile your economic reports and tell them to fudge the next batch of numbers.

[ZH: And some more context for this sudden ramp in awesome data...]

Since you already do this prior to most major elections, they’re neither surprised by the request nor concerned with how to comply. They simply go into the black boxes that control seasonal adjustments or fabricate things like “hedonic quality” or “imputed rent,” and bump up the near-term levels. Later revisions will lower them to their true range but by that time, hopefully, the danger will have passed and no one will be paying attention.

So…Brexit spooks the global markets and — surprise — some big economies report excellent numbers. Among them:

China’s GDP growth comes in at 6.7%, slightly better than expected

US industrial output surges in June, led by autos

These are indeed really good numbers, and anyone looking solely at the headlines would have to conclude that the things the major governments have done lately are working. Nothing to see here folks, everything is fine. The experts have it covered.

But a clearer, far less rosy picture emerges when you look at the numbers below the headlines, which are either harder to fudge because they’re calculated by private sector entities or are too obscure to be worth fudging.

Industrial Production is in the middle of its longest non-recessionary slump in American history...

Business inventories, for instance, are a pretty good indicator of future activity, with high inventories implying slow growth (because factories have already produced plenty of stuff for the months ahead) and low inventories meaning the opposite (because factories will have to resupply their customers shortly). Here’s a chart from Zero Hedge showing “Business Inventories At Highest Level To Sales Since The Crisis”: 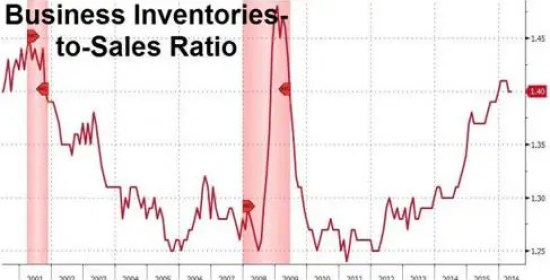 Autos especially (which you’ll recall led the jump in retail sales) are piling up on lots around the country, implying that auto plants will be running somewhat less than flat-out during the balance of the year.

Meanwhile, The Amount Of Stuff Being Bought, Sold And Shipped Around The U.S. Hits The Lowest Level In 6 Years:

(Most Important News) – When less stuff is being bought, sold and shipped around the country with each passing month, how in the world can the U.S. economy be in “good shape”? Unlike official government statistics which are often based largely on projections, assumptions and numbers seemingly made up out of thin air, the Cass Freight index is based on real transactions conducted by real shipping companies. And what the Cass Freight Index is telling us about the state of the U.S. economy in 2016 lines up perfectly with all of the other statistics that are clearly indicating that we have now shifted into recession mode.

Data within the Index includes all domestic freight modes and is derived from $25 billion in freight transactions processed by Cass annually on behalf of its client base of hundreds of large shippers. When they say “all domestic freight modes”, that includes air, rail, truck, etc. As you are about to see, the total amount of stuff that is being bought, sold and shipped around the country by all these various methods has now been declining for 15 months in a row.

If it was just one or two months you could say that it was just an anomaly, but how in the world can anyone explain away 15 consecutive months?

Not only that, but the brand new number that just came out for May 2016 is the lowest number that we have seen for the month of May in 6 years.

Are you starting to get the picture? 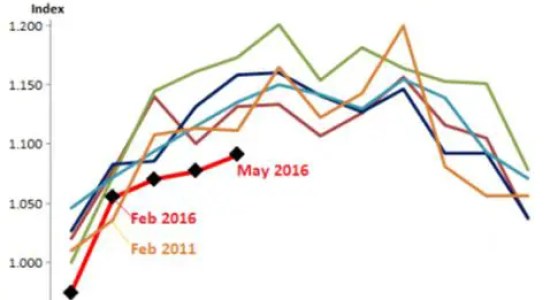 And last but not least, Empire State index softens in July:

(MarketWatch) — A reading of New York-area manufacturing conditions retreated in July, in what could be a sign of the impact of Britain’s vote to leave the European Union on the U.S. economy.

The Empire State general business conditions index slipped to 0.6 in July from 6.0 in June, the New York Fed said Friday. 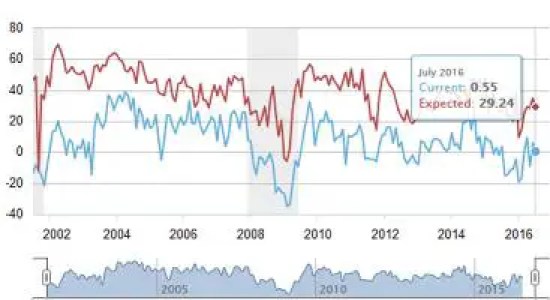 Over the past two years, manufacturing has been held down by the strong dollar. The dollar is up almost 20% on a broad trade-weighted basis since 2014 and is now just below its most recent peak in January. After the June 23 Brexit referendum, the dollar jumped against the British pound and the euro.

In addition, economists said the vote might weigh on manufacturing sentiment and increase uncertainty among businesses in general.

A new survey found that rich Americans say they were rattled by Brexit.

The index for future business activity fell 5.6 points to 29.2 in July.

To sum up, growth is great but…business inventories are spiking, freight shipments are at six-year lows and the most recent regional manufacturing report is as close to no-growth as is possible without actually not growing. Which set of figures should we trust? Time will tell, but human nature being what it is, our money is on the bad ones.