"The World's Central Banks Are Making A Big Mistake"

While everyone was talking about Brexit last month, the Bank for International Settlements released its 86th annual report.

Based in Basel, Switzerland, the BIS functions as a master hub for all the world’s central banks. It settles transactions among central banks and other international organizations. It doesn’t serve private individuals, businesses, or national governments.

Because it is relatively free from political considerations, the BIS can speak about economic issues more directly than its member central banks can. And its candor has grown steadily in recent years.

When central bankers like Janet Yellen or Mario Draghi speak, we have to discount their statements because they have policy agendas to promote. While the BIS has an agenda, too, the bank isn’t tied to any particular economy or government. Its analysts are paying attention to how the world functions in toto.

So let’s dig into the BIS annual report, parse how its views differ from everyone else’s, and discuss why we are all feeling considerable angst about the future.

The world's central banks are making a big mistake

At SIC 2015, we had the honor of hearing Bill White Speak. He is a former BIS chief economist and now chairs the OECD Economic Development and Review Committee. Bill is more plugged in to the international central banking network than anyone else I know.

Bill famously pushed Alan Greenspan to raise interest rates in 2003 so the Fed would have a cushion to use in the next crisis—which he thought would come along in a few years. Sure enough, he was right.

In my opinion, Bill is responsible for setting the current tone of research and analysis at the BIS.

Bill told us last year that the world’s central banks were making a mistake with their single-minded focus on monetary policy. He noted, correctly, that monetary solutions have not helped. He also stated that more of the same won’t help, either.

Central banks are no closer today to finding the balance they so desperately look for. They are actually farther away, having pushed rates negative in Japan and throughout Europe.

I don’t know whether they are following their models or not, because I can’t imagine what model would lead them to the places they have taken us. Nonetheless, here we are.

The results of negative rates in Europe have been disastrous for banks and insurance companies, not to mention pensions and fixed-income investors.

The single-minded focus of current economic thinking is this belief: the driver of the economy is consumption and/or the artificial replacement of private consumption by government debt, which will create desirable inflation.

This view, trumpeted most famously by Paul Krugman, is going to bite us all—not just rear-facing economists—in our collective derriere. And that is the essential message of the new BIS report.

The BIS report doesn’t say that the global economy is in a terrible place. Growth is disappointing, sure, but it could be much worse. Unemployment is still too high but is getting better. Inflation isn’t a problem in most places. 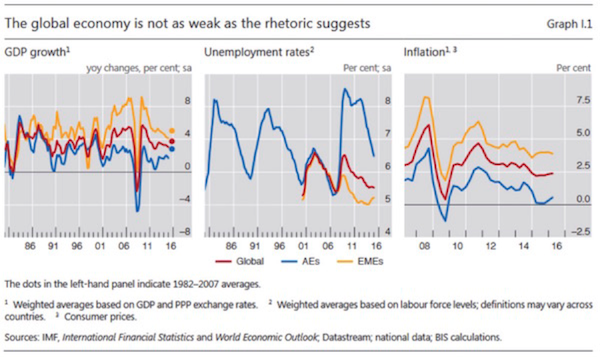 What worries BIS, though, are the long-term consequences of what they call a “risky trinity” of unusually low productivity growth, stubbornly high debt levels, and little room for policy maneuvers. That combination is responsible for persistently low interest rates.

This is an important point. Ultra-low, zero, or even negative interest rates are not themselves the problem. Instead, they are symptoms of the “risky trinity” syndrome. We can (and must) treat the symptoms, but doing so won’t cure the disease.

Interest rates aren’t simply the cost of borrowing liquid capital. They are ultimately the price of money. And money is the single most important price-signaling mechanism in the economy. Rates tell us a lot about confidence among both lenders and borrowers, not to mention consumers.

Right now, they tell us nothing good.

One thing we don’t have to wonder about is the impact of rising debt. The world is just as addicted to debt today as it used to be addicted to OPEC oil. You might think the pace at which we take on debt would slow as regulators crack down post-crisis. Not so.

Total debt in all categories (except households, whose debt has shrunk only a very little in the advanced economies since 2010) is still growing at a steady clip relative to GDP. 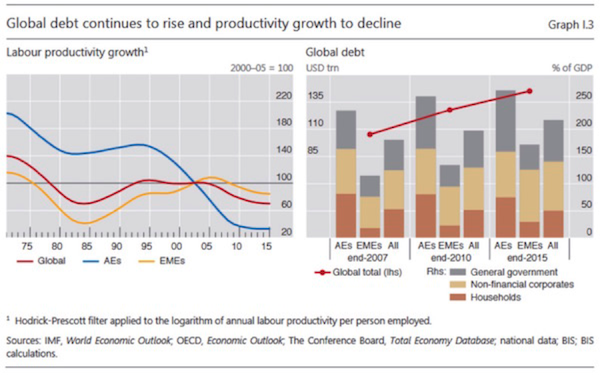 The right-hand chart above shows global debt growing. Pretty much everyone is in hock to someone. Pay down private debt, and government debt goes up. Reduce government debt, and household debt rises. This is what addictive behavior looks like. Forget heroin and OxyContin; debt is the world’s favorite drug by far.

Periodically, addicts concerned about outcomes try to get clean. The results are never pretty at first. Our politicians, unwilling or unable to go through the painful detox process, always go back for another fix. Dealers are always happy to provide. The dealers, in this context, are banks—and central banks more than private ones.

This addiction to debt is one reason we keep having market tantrums. Last year, people got concerned about China. Before that it was Greece. Now China is off the radar (even as its currency drops more than it did during our tantrum last summer); and we’re obsessed with the UK, Germany, and Italy.

Something has to give

Debt is future consumption brought forward. Once debt is incurred, consumption that might have happened in the future won’t happen. And it should come as no surprise that at a certain debt level, growth and income begin to diminish. That is exactly what we are seeing in the real world.

There are basically two categories of debt: debt used to purchase or create productive activities (like tools for a carpenter or a new factory for a business) and debt used to consume.

We forget that debt used for consumption doesn’t create new supply. It simply pulls supply forward in time. The problem is that debt can’t do this forever. Pulling your consumption forward to the present means you will consume less later.

The BIS says in their current report, The Future Will Soon Be Today, these “intertemporal trade-offs” eventually limit our options. And when they say “eventually,” what they really mean is “now.”