Italian Banks Crash Despite 'All Clear' From EU Stress Tests

For a few minutes at the open, mainstream business media persuaded itself that the EU stress tests had proved that everything was fine in Europe's banking system again. But very quickly, things went south with Italian banks - the center of the storm - reversing gains and then extending losses with Unicredit now down 8% (after being up 4%).

As Citi's Christian Schulz notes, "The 2016 stress test is unlikely to fully restore investors’ trust in the eurozone banking system, in our view."

And it seems he is right...

Monte Paschi is holding gains amid its massively dilutive capital raise, but this is noise across the stock's bid-offer.

Finally, we offer Macro-Man's sarcastic take on the EU stress tests as evidence of why EU banking stocks are sliding...

1)  In the latest European bank stress test, Monte dei Paschi ended up with Tier 1 capital of -2.4% in the most stressed scenario

2) Although there was no official pass or fail awards, a negative capital ratio is pretty clearly an epic fail

4) ...providing they can also unload €9.2 billion worth of NPLs turds off of their balance sheet first

5)  Since the imposition of negative rates in Europe (illustrated by the arrow), here is what the SX7E index has done 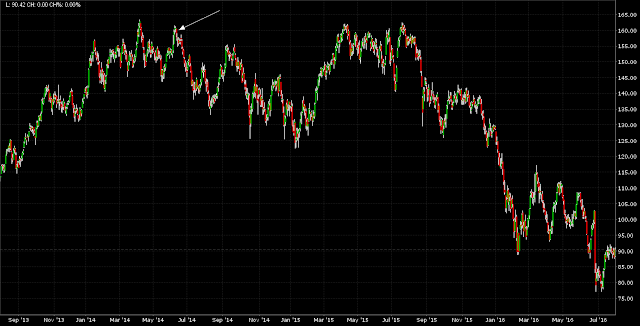 6)  So naturally, the stress tests did not measure the impact of more negative rates, only a move higher in rates

8) More European banks failed the Fed's stress test (DB and Santander) than the EBA version (albeit, as noted, there were not official pass/fail grades this time around.)

9) If you can believe it, DB scored half a percent better on the stress test than Barclays

10)  If you were wondering,  by far the highest score on the EBA stress test was achieved by NRW.Bank in Germany.   In a possibly related coincidence, their website looks like it's a school project for a middling web design student, though its career portal does offer applicants the opportunity to "venture into the fascinating world of finance!"

You can't make this stuff up!!