Submitted by Johannes Fritz and Simon Everett via The World Economic Forum,

Falling rates of global trade growth have attracted much comment by analysts and officials, giving rise to a literature on the ‘global trade slowdown’ (Hoekman 2015, Constantinescu et al. 2016). The term ‘slowdown’ gives the impression of world trade losing momentum, but growing nonetheless. The sense of the global pie getting larger has the soothing implication that one nation’s export gains don’t come at the expense of another’s. But are we right to be so sanguine?

Using what is widely regarded as the best available data on global trade dynamics, namely, theWorld Trade Monitor prepared by the Netherlands Bureau of Economic Policy Analysis, the 19th Report of the Global Trade Alert, published today, evaluates global trade dynamics (Evenett and Fritz 2016). Our first finding that the rosy impression painted by some should be set aside. We demonstrate that:

-World export volumes reached a plateau at the start of January 2015. The same finding holds if import volume or total volume data are used instead.

Figure 1 World trade plateaued around the start of 2015 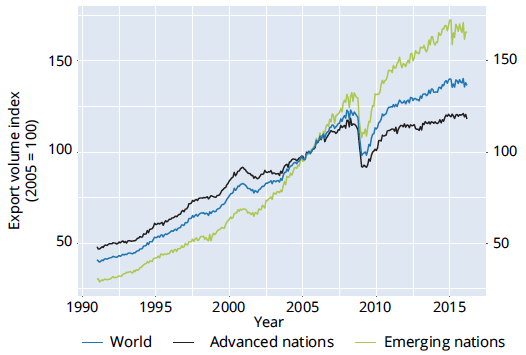 -Except during global recessions, a plateau lasting 15 months is practically unheard of since the Berlin Wall fell.

-In 2015 the best available data on world export volumes diverges markedly from that reported by the WTO, IMF, and World Bank, and probably explains why analysts at these organisations have missed this profound change in global trade dynamics (Table 1).

Our argument is not that world trade has stopped. Rather, that according to a benchmark measure of trade volume, world trade isn’t slowing down – it is not growing at all.

To examine the variation in trade flows across products during the global trade plateau, a detailed product-level dataset of the value of trade was assembled from the monthly UN trade data releases through to December 2015. Analysis of this dataset revealed that: 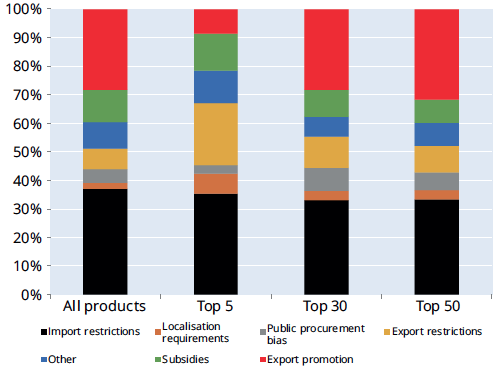 In sum, the variation across products in how much trade fell in value in 2015 suggests that an across-the-board currency valuation effect (caused by the rising value of the US dollar) or a ‘commodities only’ story are not enough. That there could be a link between the policy mix facing a product on global markets and changing trade values begs the question as to whether trade policy dynamics changed during the global trade plateau as well. We turn to this matter.

In a nutshell, yes. Using the latest update of the Global Trade Alert, which saw 1,016 new reports of government policy measures added to the database from mid-October 2014 to 1 May 2015, we found that:

Before world trade plateaued, duties for dumping, subsidisation, and import surges were used most; during the plateau, trade-distorting bailouts and financial assistance were number one. Since global trade plateaued, another trade restriction – export taxes – were used less and requirements on investors to source locally imposed more often. In short, the policy mix used by governments appears to have shifted once trade plateaued, suggesting trade policy dynamics have evolved as well (Figure 3). 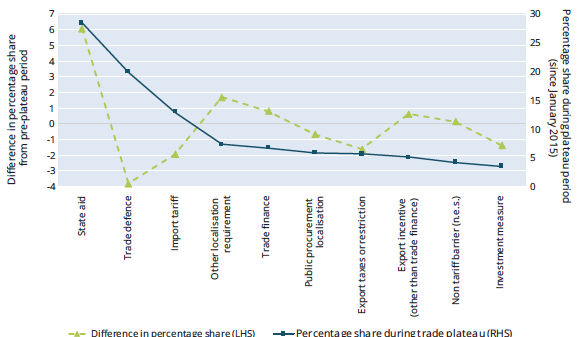 The new GTA report also includes a chapter on the high-profile trade policy tensions in the steel sector. Last year and this, steel sector interventions have been under the spotlight. However, our report shows that protectionism in this sector has been ratcheting up since 2010 and, while so much attention is focused on tariffs targeting dumped steel, in fact, state incentives to promote steel exports are a far larger systemic problem.

In contrast to high-profile steel, our report also includes a chapter on the quiet spread of old and newer forms of local content requirements. This development is remarkable in light of the widely held view that these measures were banned over 20 years ago in a WTO accord. Nevertheless, they have made a comeback and we draw out the key lessons from the growing body of analysis of the adverse trade, foreign direct investment, and welfare impact of rules that force firms to source locally.

Multinational firms are adjusting to the new reality of ever-more fragmented markets. As the CEO of General Electric recently put it: “A localization strategy can’t be shut down by protectionist politics” (Bhatia et al. 2016) Many more firms have announced plans to ‘localise production’. Since political leaders won’t rein in protectionism, pragmatic business people are adjusting – often by substituting foreign direct investment for trade.

Risk of a negative feedback loop

Either finding – of global trade growth coming to a halt or a sharp increase in beggar-thy-neighbour activity – ought to worry policymakers. That both coincide prompts questions of linkage. In our report we don’t claim to have shown definitely what is causing what – after all, multiple factors likely trade and policy decisions and the data available to check won’t be published for years.

Analysts have the luxury of waiting for data to mount up before taking a stand; decision-makers in the public and private sectors do not. As a result, going forward an even more important concern is that a negative feedback loop develops where zero trade growth fuels resort to even more zero-sum trade policies which, in turn, discourages cross-border supply of national markets.

In a world where global commerce isn’t growing any more, governments may conclude that larger market shares for their exporters can only be grabbed from trading partners. Parallel contests for talent, foreign direct investment, research and development hubs, and intellectual property would intensify. This could, in turn, precipitate a 21st century variant of mercantilism that, unlike its predecessors in earlier centuries, affects more types of global commerce.