It’s one of the great engineering achievements in history…

At 48 miles long, the Panama Canal cuts through a narrow strip of land in Central America.

It links up the Atlantic and Pacific oceans, allowing ships to pass through the landmass instead of sailing around a whole continent.

It’s worth the price.

There’s only one other route between the Atlantic and Pacific oceans: a 7,872-mile journey around the tip of South America.

This trip can take weeks and cost hundreds of thousands of dollars in fuel.

The U.S. built the Panama Canal in the early 1900s. At a cost of $9 billion in today’s dollars, it was the most expensive construction project in U.S. history at the time.

So when other countries (including Germany and Japan) tried to build a second canal in nearby Nicaragua, the U.S. wouldn’t have it. A second canal, just 500 miles away, would dilute its value.

In 1912, the U.S. military even occupied Nicaragua to make sure there would be no Nicaraguan canal.

And there never was.

But that’s all about to change…

The Chinese are preparing to build a Nicaraguan Canal. Like the Panama Canal, it will be a shortcut for ships to pass through Central America.

If all goes to plan, China will finish its canal in about 10 years.

And here’s the thing…

China’s Nicaraguan Canal is just a small piece of a much larger strategy of building strategic infrastructure to bypass U.S. control.

The focal point of this strategy is a project called the “New Silk Road.” And if China has its way, the New Silk Road will help China dethrone the U.S. as the dominant world power.

The New Silk Road is the biggest story you’re not hearing about. The U.S. media has barely made a peep about it. Maybe because it’s just too big and complex to fit into soundbites…

The World’s Most Ambitious Infrastructure Project

For over a thousand years, the ancient Silk Road was the world’s most important land route. It was a main trade route for lucrative Chinese silk.

At 4,000 miles long, it passed through a chain of empires and civilizations and connected China to Europe. Merchant Marco Polo traveled to the Orient on this path. 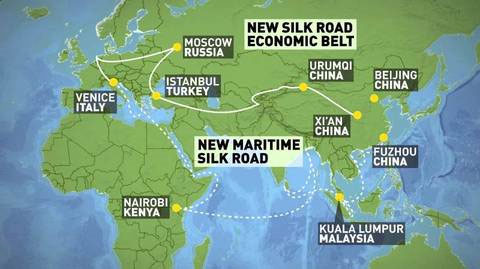 Plus, the Chinese have the political will to pull it off… and the financial, technological, and physical resources to make it happen.

There’s a saying that the new national bird of China is the construction crane. I was recently in Shanghai, Hong Kong, and Macau, and I can see why. These cities are full of impressive buildings and large skyscrapers.

The plan is still in the early stages, but important pieces are already falling into place. Late last year, a train carrying containerized goods left Yiwu, China. It arrived in Madrid, Spain, 21 days later. It was the first shipment across Eurasia on the Yiwu-Madrid route, which is now the longest train route in the world. It’s one of the first components of the New Silk Road.

In short, the New Silk Road is all about building alternatives to U.S. power.

Part of that, of course, is displacing the U.S. dollar, the world’s premier currency.

So it should be no surprise that China’s New Silk Road project is about to make its first big move in the gold market.

According to recent press reports in Asia, China’s $40 billion New Silk Road Fund is likely to make a bid for a gold mine in Kazakhstan.

The Vasilkovskoye mine is owned by Glencore, an Anglo-Swiss mining company. It produced 380,000 ounces of gold last year. The New Silk Road Fund is considering buying it for $2 billion.

This is just the beginning...

China will continue to build new infrastructure for the New Silk Road. And continue to accumulate lots more gold.

This is not good news for the U.S.

Most people don’t realize it, but if the dollar loses its status as the world’s reserve currency, the dollar would collapse. It would cause a financial hurricane of historic proportions. It would be much worse, much longer, and very different than what we saw in 2008 and 2009.