Having seen her poll numbers suddenly explode higher (and Trump's collapse) following Reuters' decision to tweak its polling methodology, it appears we just witnessed 'Peak Hillary' as Reuters reports Clinton's lead over Trump has tumbled back to just 3 points (the poll had a credibility interval of plus or minus 3 percentage points) meaning, as Reuters is forced to admit, that the results suggest the race is roughly even...

Democratic presidential nominee Hillary Clinton's lead over Republican rival Donald Trump narrowed to less than 3 percentage points, according to a Reuters/Ipsos opinion poll released on Friday, down from nearly eight points on Monday.

Reuters subtly points out the folly of their survey respondents...

Clinton had pulled well ahead of Trump on the heels of the Democratic National Convention last week, where she became the first woman to accept the U.S. presidential nomination from a major political party.

Since then, Trump has engaged in a days-long feud with the family of an American soldier killed in Iraq and squabbled with the Republican leadership over his comments and leadership turmoil within his campaign.

But as RealClearPolitics' aggregated data shows, the swings are dramatic to say the least...

The noise in these polling numbers is incredible and prompted MishTalk's Mike Shedlock to take a caustic look at the prognostications of the web's forecasters... Peter Atwater, President of Financial Insyghts and Author of Moods and Markets asked an interesting question today: “Have we reached peak Hillary yet?”

In Atwater’s tweet, he posted a flashback to this January 2014 Time Magazine cover.

The answer to the question “Can anyone stop Hillary?” is pretty obvious: Yes, Trump can easily win if he can ever learn to control his mouth (a recession hits or some dirt that matters comes out on Hillary that matters).

I watch with amusement as Nate Silver posts his ridiculous forecasts on the Presidential Election Odds. 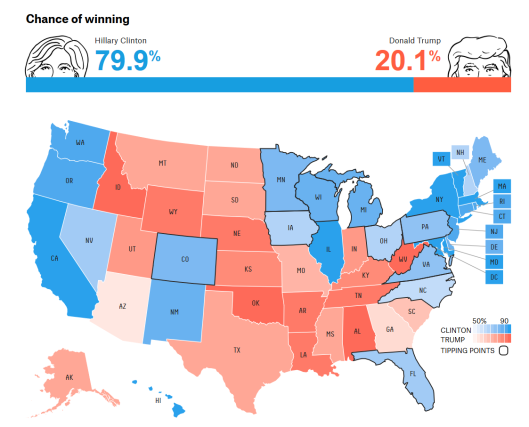 Rest assured, Hillary does not have a 79% chance of winning.

This is pure idiocy.

Silver is clearly taking the news of the day and projecting it out to November when voters clearly have a time span of about three days.

How Silver can look himself in a mirror and make such widely varying off the wall predictions is a mystery.

Atwater had a second tweet today that is quite interesting...

It says a lot about current social mood when a modest rise in people's level of happiness can upend a candidate. pic.twitter.com/Us4EFpYV3I

We leave it to Reuters themselves to conclude with their thoughts on the drop in Hillary's support and revival of Trump...

The reasons behind the shift were unclear.