Is Something Wrong With Hillary: Bizarre Behavior, Seizure Allegations Raise Doubts About Her Health

As the presidential campaign enters its final stages, probing questions have emerged about the health condition of Hillary Clinton.

Hillary' bizarre, erratic behavior on the campaign trail (culminating with last week's perplexing "short-circuit" comment) has left many wondering whether she is seriously ill.  Hillary has at multiple times had convulsions that appear to be seizures on camera, including a series of seemingly inexplicable coughing fits. 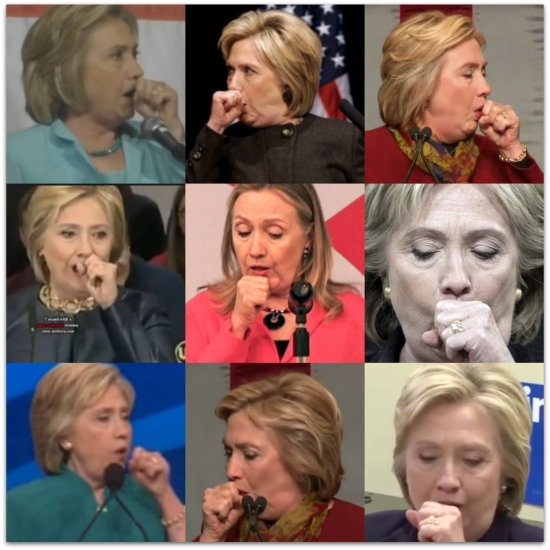 A frequently referenced video, shown below, alleging that Hillary may have seizure-like conditions emerged several weeks ago and has so far failed to lead to a conclusive explanation whether Hillary may have ongoing health problems and potential residual aftereffects from a blood clot in her brain sustained three years ago.

Recall in January 2013, CNN reported that then Secretary of State Clinton was treated with blood thinners at a New York hospital to help dissolve a blood clot in her head. Back then doctors were confident she would make a full recovery. Clinton was admitted to New York Presbyterian Hospital on Sunday due to the clot that was discovered during a follow-up exam related to a concussion she suffered this month, her spokesman, Philippe Reines, said. The clot was located in the vein between the brain and and the skull behind Clinton's right ear and did not result in any stroke or neurological damage, her doctors said in a statement.

Going further back, in 2005 then Senator Hillary fainted during a speech in Buffalo, NY, where she received medical attention on site. “About five minutes into the speech, she said she was queasy,” said Erie County Democratic Chairman Len Lenihan, who was at the Women’s TAP fund-raiser at the private club. "Clinton left the podium and continued her talk sitting in a chair but eventually left the room, saying she needed a break, Lenihan said. She returned to the podium a short time later but fainted before resuming her speech. “It became clear she was faint. She was sort of brought down gracefully,” he said.

The room was cleared, and Clinton immediately received medical attention from, among others, a doctor who attended the event.

And so, questions about Hillary's health remain, especially after photos emerged over the weekend showing Hillary demonstrating unease while climbing stairs. 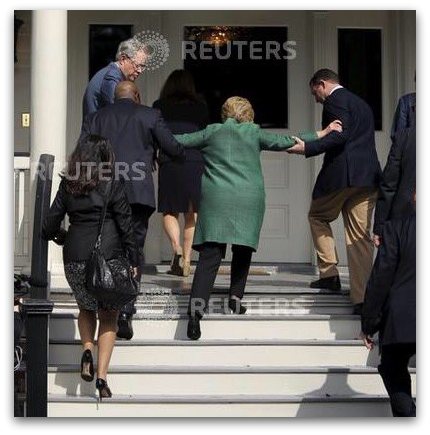 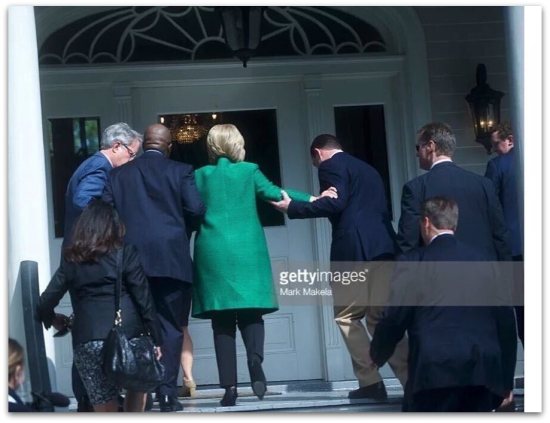 This has led to further speculation about the identity of a man, allegedly part of her secret service, who some has been dubbed as her "handler", a person who is supposedly her personal doctor

As Mike Cernovich points out, here’s a picture of Hillary’s handler before he joined Secret Service. He’s in casual attire

Every SS agent is in a suit. Hillary's handler is causal. Something huge is up. https://t.co/MR1a1YkMCt pic.twitter.com/T2UIZ1u4JJ

We saw this first “doctor” during Hillary’s recent freeze-up. As the following captures show, Hillary’s handler appears always ready to reassure Hillary, moving Secret Service Agents out of the way, urging her to "keep talking". According to Cernovich "this handler is not an ordinary SS agent." 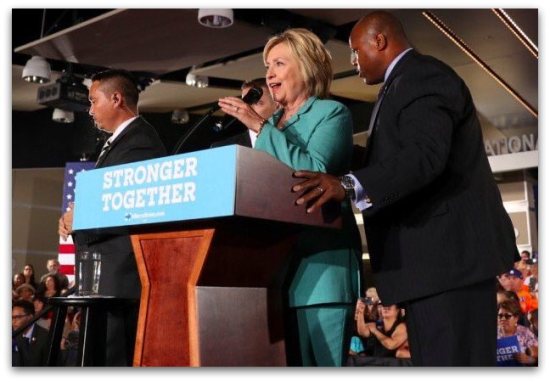 Further adding to the mystery, Cernovich also points out - in an unconfirmed report - that the so called "handler" appears to carry a Diazepam pen.

The device in question is a Diazepam auto-injector pens are used for for Acute Repetitive Seizures. Diazepam is one of the medications prescribed for patients who experience recurrent seizures.

These details emerge just a day after the American Psychiatric Association has told its member not to call presidential candidates mentally ill, envisioning recent allegations involving Donald Trump.
As The Hill notes, "following a bad week for Donald Trump, in which he insulted a Gold Star family and declined to endorse Speaker Paul Ryan before doing it anyway on Friday, many have started to question whether Trump has a personality disorder."

"We're asking ourselves -- I didn't say this, but this is what everybody is saying: Is Donald Trump a sociopath?" MSNBC host Joe Scarborough asked earlier this week.

A California Democrat Wednesday launched a change.org petition calling for Trump to undergo a mental health evaluation, suggesting he may have a narcissistic personality disorder. More than 25,000 have signed it as of Sunday.

While much of this may be in good humor, and meant to focus attention on Trump's bombastic statements, perhaps the time has come for a serious look into Hillary Clinton's own health history, especially since most polls still have her beating trump, and she may very well be America's next president.