The Coming Collapse Of U.S. Net Worth Will Wipe Out Millions Of Americans

As the Financial Circus continues today, pushing down the precious metals prices, millions of Americans are going to get wiped out when the collapse of U.S. net worth begins in earnest.  Anyone with a tad bit of common sense realizes these financial markets today are totally disconnected from reality.

With 90% of the U.S. media now in control by six large mega-corporations, Americans have no idea just how bad the U.S. financial system has become.  News stories today that would have caused a stock market crash and a spike in the precious metals years ago... no longer are a realistic barometer of the market today.  Instead, the broader Stock, Bond and Real Estate Markets where 99% of Americans are invested, continue to be propped up. 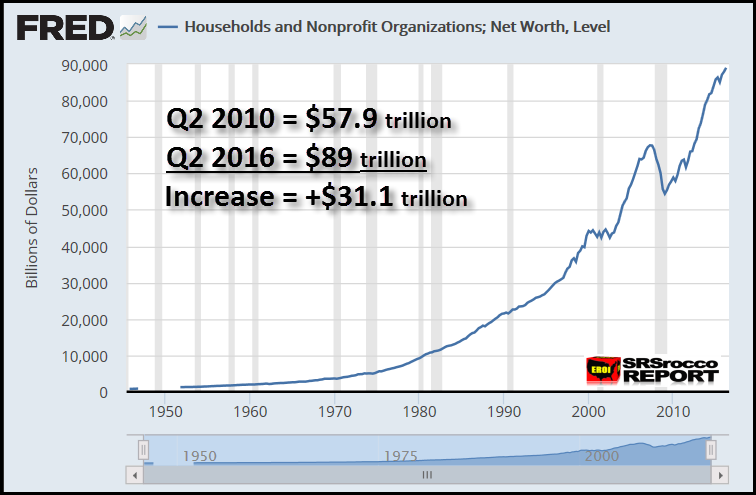 I would imagine a lot of wealthy Americans believe they are living life "High On The Hog" today.  However, that $31 trillion in additional wealth is a nothing more than a "Digital Mirage."  For wealth to grow, more energy must be burned and positive economic activity must be generated.  This is the foundation of all economic principles.

Unfortunately, Americans did not burn more energy to create this additional $31 trillion in U.S. net worth.  Matter-a-fact, total U.S. energy consumption in 2016 will likely turn out to be less than it was in 2010: 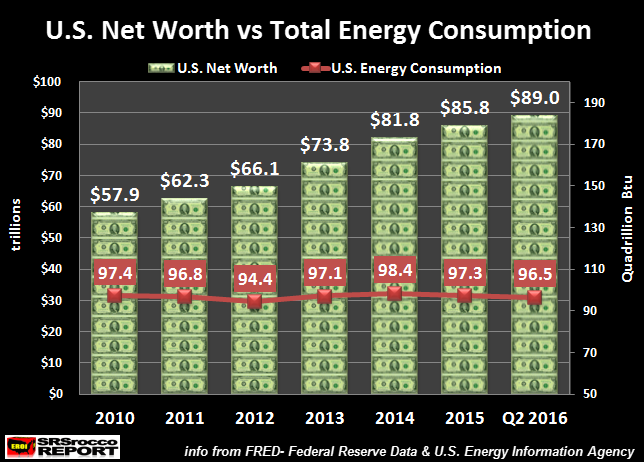 In all likelihood, the increase in U.S. net worth came via the tens of trillions of dollars of Fed and Central Bank liquidity.  Basically, hot air and lots of smoke and mirror accounting.

We can clearly see the same type of financial insanity taking place in the growth of U.S. GDP - Gross Domestic Product: 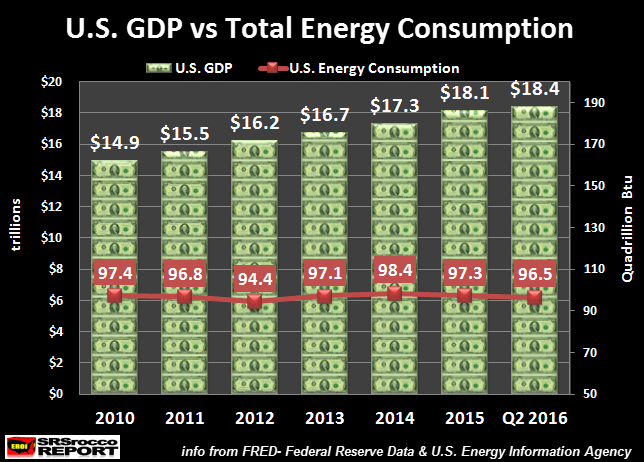 However, the magicians at the Federal Reserve and U.S. Treasury figured out a  NIFTY way to increase our Net Worth  and GDP for the past six years while energy consumption remained flat.  Unfortunately, most Americans don't understand this "Ponzi Finance 101"... including most of the highly educated intellectuals.

This is what I call "Intelligent Stupidity."  The country is full of really smart people who are completely stupid when it comes to basic financial and economic sense.  Instead, they have been infected by what James Kunstler calls, "Wishful Thinking."

WARNING:  Most Analysis Out There Is Completely Useless

There's quite a lot I can write about this topic.  Let me start off by saying, we can totally write-off the Mainstream media (MSM).  Once you understand that, you have 90-95% of the battle won.  Unfortunately, there is still a lot of incomplete, faulty and lousy analysis by the internet alternative media.

I am not trying to be harsh here, but the truth of the matter is that a significant percentage of the alternative media is full of companies and sites that promote lousy conspiracies, pump & dump stock scams and precious metals selling fraud or thievery.

This is really a horrible situation.  When some poor American finally wakes up to the Greatest Financial Ponzi Scheme in history and starts to read the alternative media, chances are high that they are misled or taken advantage of financially.

For example, one of the websites that I used to read several times a week was just bought out by one of the largest financial newsletter organizations.  This gentleman is on CNBC often and puts out some pretty good stuff that Zerohedge posted all the time.  I gather many of you will figure this out.

More and more BIG NAMES are selling their souls for the very DOLLAR that they say they despise.  How despicable.

While I don't have a problem with someone charging for original content, I do have a problem when the analysis is faulty, lousy or misleads the public.  I would imagine a small handful of folks who read my work may say the same about me.  However, you can't please everyone.

This is the reason why I offer donations rather than a paid subscription service.  If someone finds merit in the work, then they are more than welcome to contribute.  I believe the information I publish is really important for all the public to understand.

The problem with much of the alternative media analysis, is that it fails to include the key factor... ENERGY.   Today, I see that SilverDoctors has published one of Keith Weiner's articles titled, Deutsche Fuels Silver, To The DOWNSIDE.  In the article, Weiner makes the following claim on silver:

One thing’s for sure, silver is a lousy bet at this price with these fundamentals. Buying silver right now—at least if you’re buying it on speculation of a price gain—is almost the textbook definition of a Ponzi scheme.

Keith's work is based on the "gold and silver basis", which refers to the current abundance or scarcity of metal in the market.  This is based on short-term trading activity, not long-term fundamentals.

I would kindly like to remind my readers that right before the 1929 Stock Market Crash and Great Depression, American Economist Irving Fisher made his infamous statement, "Stock prices have reached what looks like a permanently high plateau."  Unfortunately, nothing has changed with economic or financial wisdom in 87 years.  Americans are just as gullible as ever.... even worse.

Keith Weiner forecasts the paper gold and silver price much the same way the musicians on the Titanic continued to play their instruments as the ship sank.  Thus, Weiner is acting just like the musicians on the Titanic who were trying to calm the passengers.  Instead, Weiner's analysis is focusing on the short-term noise (music) while the entire U.S. economy will sink down the toilet.

The Coming Thermodynamic Oil Collapse Is Worse Than I Realized

Bedford told me that after they ran the model, the results were so shocking, they sat on the damn thing for two years before publishing.  I asked him did any of the engineers that worked on the model disagree with the results?  His answer was, "Not a single one disagreed."

It has taken me some time to digest this new energy information as well understand the details by talking with Bedford Hill and Louis Arnoux of nGeni.  Again, I will be interviewing these gentlemen on this Thermodynamic Oil Collapse model and the implications shortly. 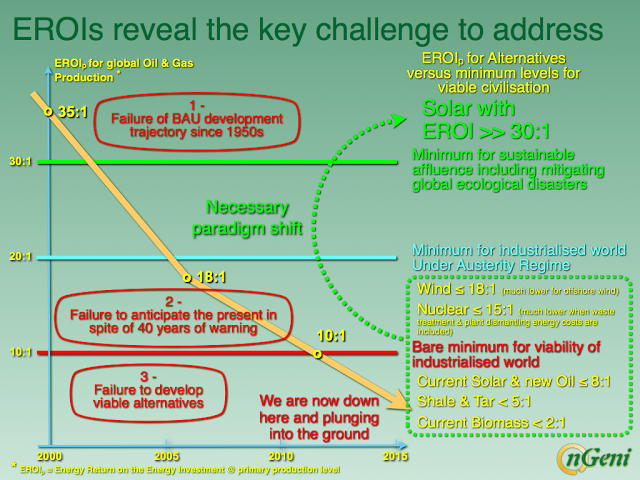 Anyone interested in reading the Hills Group work, you can go to their website, thehillsgroup.org, or check out their detailed report.

The rapidly falling EROI - Energy Returned On Invested is gutting the entire U.S. oil industry and economy.  Instead of the United States enjoying real fundamental growth based on increased energy consumption, we have turned to inflating electronic digits as an indication of our wealth.

As I explained in the beginning of the article, U.S. energy consumption has been flat for the past six years, while U.S. GDP has increased nearly 25%, as our supposed net worth has jumped 54%.  Again, this goes against any sound fundamental economic theory.  We have totally removed ourselves from reality.

While the Fed and Central Banks will continue to prop up the markets by printing money and buying bonds and stocks, they can't print barrels of oil or energy BTU's.

There lies the Rub...