The Boredom Before The Storm

With all the surprising and/or disturbing things going on – Brexit, China’s soaring debt, US/Russia/China saber rattling, the, um, unique US presidential race, the cyber attack that shut down big parts of the US Internet – you’d think that an unsettled world would be reflected in skittish financial markets.

Instead we’re getting the opposite, with stock price movements becoming more and more placid as the year goes on. The following chart shows the volatility index (VIX) for the S&P 500 which, after some notable action in 2008 and 2011, has become ever-calmer, with recent readings comparable to the (in retrospect delusional) levels of 2006, just before the biggest financial crisis since the Great Depression. 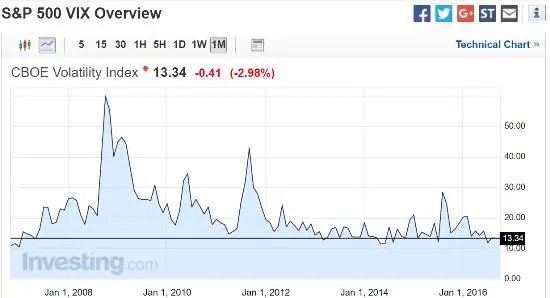 And it's not just equity risk that has been pummeled...

First, during credit bubbles volatility normally contracts because enough new money is being created to provide pretty much everything with a bid. In other words, all the new liquidity being created by desperate governments has to go somewhere, so dips get bought before they can become dramatic and traders accept the placid present as the new normal.

Second, we’re in an election year and the people currently in charge badly want their chosen candidates to win. So government spending is rising dramatically. The federal deficit is up 17% so far this year, but jumped 67% in August. This burst of new borrowing has given the economy its current “all is well, stay the course” gloss. A bit more on this from MarketWatch:

The federal government ran a budget deficit of $107 billion in August, the Treasury Department said Tuesday, $43 billion more than in August 2015.

The government spent $338 billion last month, up 23% from the same month a year ago. Spending rose notably for veterans’ programs and Medicare, Treasury said.

For the fiscal year so far, the budget deficit is up 17%. The government’s fiscal year runs from October through September. The Congressional Budget Office estimates the shortfall for fiscal 2016 will be $590 billion, or about $152 billion more than last year.

And what does it mean?

The current financial market insouciance is no more sustainable than that of 2006 because it’s caused by temporary factors that can’t continue without themselves causing turmoil. Debt, for instance, can’t grow relative to GDP forever… 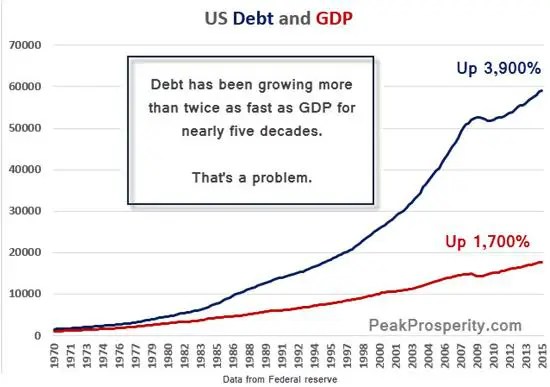 …and equity valuations have only exceeded their current levels thrice in the past century, each time with notable volatility following shortly. 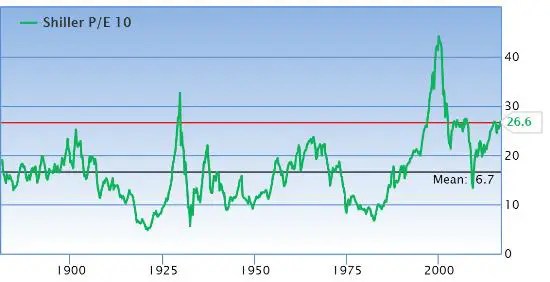 So it’s a safe bet that 2017 will be in many ways a mirror image of 2016. US politics will be decided if not settled, government spending will stop spiking, and equities will return – possibly suddenly – to more historically normal valuations. And rising volatility will once again become the norm – as it should be in a world this dysfunctional.

How to play it? VXX is an ETF that tracks the VIX – but only for short periods of time. So it’s strictly a trading vehicle, not an investment. Shorting high P/E stocks is a longer-term way to bet on the coming mean-reversion of equities to lower valuations. Put options are a medium-term way to make the same bet with leverage. If we’re heading back to the exciting days of 2008 (which we are) then all of the above should provide both thrills and trading profits.

And precious metals, because they attract fearful capital, should benefit from the coming anxiety spike. Last time around – after an initial plunge – gold, silver and the shares of the companies that mine them embarked on a multi-year run that made them the best performing assets of the decade.