Don’t Sweat The Election. The Next Crisis Is Already Baked Into The Cake

Friday was one of those days where you walk away from the screen for a minute and come back to find a completely different market. All it took was the FBI finding a trove of new Clinton emails, thus breathing new life into the Trump campaign and throwing what was a foregone conclusion back into doubt. Stocks tanked and gold popped, illustrating Wall Street’s preference in the upcoming election.

It will be this way until the vote, especially if polls continue to tighten and the outcome remains uncertain. So there’s no point in obsessing over fundamentals for now. Nothing real will matter until we find out who gets to mess things up going forward. Sort of like the original Ghost Busters where the demon/god says “Choose the form of the destructor.”

In other words it’s a mess either way. Only the details of the mess are in question.

From here on out politics are only relevant at the extremes - major war, corruption scandal, martial law etc. Short of that, the fiat currency/fractional reserve banking world has such institutional momentum that it really won’t matter whether Trump is picking on bankers and building his wall or Clinton is protecting Wall Street and raising taxes. Debt will keep soaring as it has under every president since Reagan and jobs will disappear as machines replace people, thus bringing the end of the current system inexorably closer.

So it’s both dangerous to try to time this kind of uncertainty and, in the end, unnecessary. Crisis is coming and governments (whether left or right, populist or establishment) will respond as they always do, with easier money and more borrowing.

Here are three trends that matter vastly more than the name of the next US president:

“China’s Debt Has Grown $4.5 Trillion In Past 12 Months, More Than The US, Japan And Europe Combined”

(Talk Markets) – While concerns about China’s debt load, capital flows, and depreciating currency have been pushed to the back-burner in recent months, perhaps facilitated by a welcome rebound in global inflation – perceived by markets and global central bankers that monetary policy is finally working – it is worth a quick reminder of how we got here.

First, a quick trip through memory lane to remind us how much has changed in just the past year.

In a note by Morgan Stanley’s Chetan Ahya released on Sunday, the strategist reminds us that a little more than a year ago, the global economy was facing intense disinflationary pressures. Global commodity prices were declining significantly and the slowdown in China and other major commodity-producing EMs had led to some concerns that it could pull developed markets into recession and drag inflation down along with it. At the same time, in China, producer prices fell by almost 6%Y and the regime change in its currency management approach meant that China was no longer absorbing disinflationary pressures from abroad.

And while this seems like a distant memory today, thanks to China which has played a pivotal role in driving the global inflation cycle – this time on the upside – as the cyclical recovery has both lifted China’s own inflation and transmitted it globally, here is how this happened: the recovery in China has been driven by yet another round of debt indulgence. Debt in China has grown by US$4.5 trillion over the past 12 months, by far the highest amount of debt creation globally as compared to US$2.2 trillion in the US, US$870 billion in Japan and US$550 billion in the euro area. Indeed, China on its own has added more debt than the US, Japan and the euro area combined.

While we have shown the IIF’s forecast of Chinese debt countless times in recent months, here it is once again to put China’s unprecedented debt expansion in context: Three-month Libor rates – the benchmark cost of short-term borrowing for the international system – have tripled this year to 0.88pc as inflation worries mount.

Fear that the US Federal Reserve may have to raise rates uncomfortably fast is leading to an increasingly acute dollar shortage, draining global liquidity.

“The Libor rate is one of the few instruments left that still moves freely and is priced by market forces. It is effectively telling us that that the Fed is already two hikes behind the curve,” said Steen Jakobsen from Saxo Bank.

“This is highly significant and is our number one concern. Our allocation model is now 100pc in cash. This is a warning signal for the market and it happens extremely rarely,” he said.

Goldman Sachs estimates that up to 30pc of all business loans in the US are priced off libor contracts, as well as 20pc of mortgages and most student loans. It is the anchor for a host of exotic markets, used as a floor for 90pc of the $900bn pool of the leveraged loan market. It underpins the derivatives nexus. 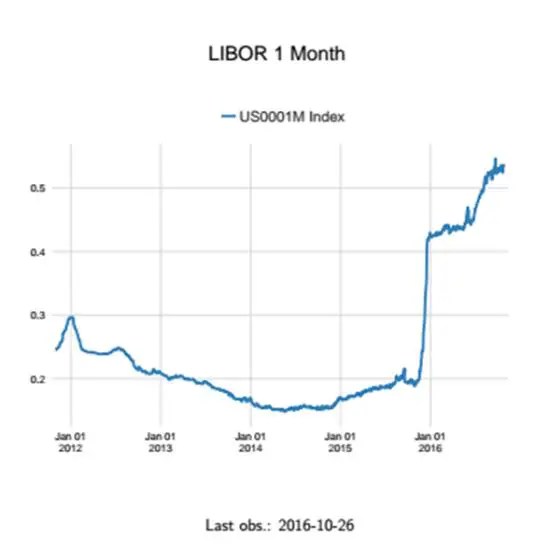 The chain-reaction from the Libor spike is global. The Bank for International Settlements warns that the rising cost of borrowing in dollar markets is transmitted almost instantly through the global credit system. “Changes in the short-term policy rate are promptly reflected in the cost of $5 trillion in US dollar bank loans,” it said.

Roughly 60pc of the global economy is linked to the dollar through fixed currency pegs or ‘dirty floats’ but studies by the BIS suggest that borrowing costs in domestic currencies across Asia, Latin America, the Middle East, and Africa, move in sympathy with dollar costs, regardless of whether the exchange rate is fixed.

Short-term ‘Shibor’ rates in China have been ratcheting up. The cost of one-year swaps jumped to 2.71pc last week, and the spread over one-year sovereign debt is back to levels seen during the Shanghai stock market crash last year.

These strains are not a pure import from the US. The Chinese authorities themselves are taking action to rein in a credit bubble. It is happening in parallel with Fed tightening, each reinforcing the other, and that makes it more potent.

Three-month interbank rates in Saudi Arabia have soared to 2.4pc. This is the highest since the global financial crisis in early 2009 and implies a credit crunch in the Saudi banking system. The M1 money supply has fallen 9pc over the last year.

(Economic Collapse Blog) – Do you remember the subprime mortgage meltdown from the last financial crisis? Well, this time around we are facing a subprime auto loan meltdown. In recent years, auto lenders have become more and more aggressive, and they have been increasingly willing to lend money to people that should not be borrowing money to buy a new vehicle under any circumstances. Just like with subprime mortgages, this strategy seemed to pay off at first, but now economic reality is beginning to be felt in a major way.

The total balance of all outstanding auto loans reached $1.027 trillion between April 1 and June 30, the second consecutive quarter that it surpassed the $1-trillion mark, reports Experian Automotive.

In order to try to help people afford the payments, auto lenders are now stretching loans out for six or even seven years. At this point it is almost like getting a mortgage.

But even with those stretched out loans, the average monthly auto loan payment is now up to a record 499 dollars.

Prime delinquencies were up 12 percent on a month-over-month basis and were up 21 percent compared to the same month last year.

General Motors reported in a similar filing that it set aside $864 million for credit losses in that same period of 2016, up 14% from a year earlier.

These three things – soaring Chinese debt, disruptions in the money market, and the end of the auto loan bubble – matter vastly more than which party runs what part of the government.

When one or all (or some other problem like Deutsche Bank) blow up in 2017, deficit spending will soar, interest rates will be forced down (to the extent that that’s possible) and new rules will be imposed on whatever freely-functioning markets remain.

And so it will go until the old tricks stop working. Then the details will start to matter again.