At first, the idea of central banks intervening in the equity markets was probably seen even by its fans as a temporary measure. But that’s not how government power grabs work. Control once acquired is hard for politicians and their bureaucrats to give up. Which means recent events are completely predictable:

(Bloomberg) – The value of the Swiss National Bank’s portfolio of U.S. equities rose nearly 1 percent to a record in the three months through September on the back of rallying share prices.

The holdings increased to $62.4 billion from $61.8 billion at the end of June, according to calculations by Bloomberg based on the central bank’s regulatory filing to the U.S. Securities and Exchange Commission and published on Monday. 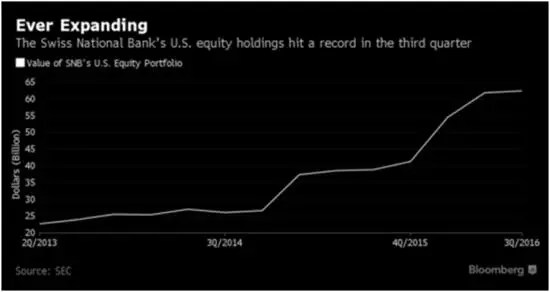 The central bank had stakes in some 2,500 companies listed in the U.S., according to the SEC filing. Its biggest holdings were Apple Inc., Microsoft Corp. and Exxon Mobil Corp., according to data compiled by Bloomberg.

The Bank of Japan’s Unstoppable Rise to Shareholder No. 1

(Bloomberg) – The Bank of Japan’s controversial march to the top of shareholder rankings in the world’s third-largest equity market is picking up pace.

Already a top-five owner of 81 companies in Japan’s Nikkei 225 Stock Average, the BOJ is on course to become the No. 1 shareholder in 55 of those firms by the end of next year, according to estimates compiled by Bloomberg from the central bank’s exchange-traded fund holdings. BOJ Governor Haruhiko Kuroda almost doubled his annual ETF buying target last month, adding to an unprecedented campaign to revitalize Japan’s stagnant economy.

While the BOJ doesn’t acquire individual shares directly, it’s the ultimate buyer of stakes purchased through ETFs. Estimates of the central bank’s underlying holdings can be gleaned from the BOJ’s public records, regulatory filings by companies and ETF managers, and statistics from the Investment Trusts Association of Japan. Forecasts of the BOJ’s future shareholder rankings assume that other major investors keep their positions stable and that policy makers maintain the historical composition of their purchases.

The central bank’s influence on Japanese stocks already rivals that of the biggest traders, often called “whales” in the industry jargon. It’s the No. 1 shareholder in piano maker Yamaha Corp., Bloomberg estimates show, after its ownership stake via ETFs climbed to about 5.9 percent. 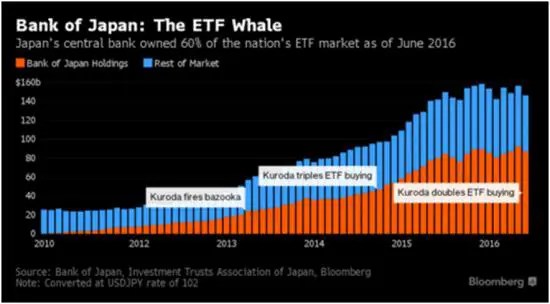 The BOJ is set to become the top holder of about five other Nikkei 225 companies by year-end, after boosting its annual ETF buying target to 6 trillion yen last month. By 2017, the central bank will rank No. 1 in about a quarter of the index’s members, including Olympus Corp., the world’s biggest maker of endoscopes; Fanuc Corp., the largest producer of industrial robots; and Advantest Corp., one of the top manufacturers of semiconductor-testing devices.

Yellen says Fed purchases of stocks, corporate bonds could help in a downturn

(Reuters) – The Federal Reserve might be able to help the U.S. economy in a future downturn if it could buy stocks and corporate bonds, Fed Chair Janet Yellen said on Thursday.

Speaking via video conference with bankers in Kansas City, Yellen said the issue was not a pressing one right now and pointed out the U.S. central bank is currently barred by law from buying corporate assets.

But the Fed’s current toolkit might be insufficient in a downturn if it were to “reach the limits in terms of purchasing safe assets like longer-term government bonds.”

“It could be useful to be able to intervene directly in assets where the prices have a more direct link to spending decisions,” she said.

If your first reaction to the above (especially Yellen’s clear misunderstanding of the respective roles of central banks and stock markets) is “these guys are idiots,” you’re probably in the minority. Most modern citizens see government intervention of any kind as at least a potentially good thing, depending on the situation. They’re wrong in this case, for the following reasons:

1. Central banks buying equities is a direct subsidy to the richest members of society, since the higher a person’s net worth, the more stocks and bonds they tend to own. One has to wonder why, if the goal is to stimulate spending — and old notions of monetary propriety are being abandoned in any event — the world’s central banks don’t simply double every bank savings account or pay off all student loans or credit card debt. The answer, of course, is that central banks serve several masters, but their main allegiance is to the financial/political class which, as we now know, tends to benefit directly from rising share prices. So look at this policy as one more way of redirecting wealth from the poor to the rich.

2. The idea that central banks can buy up shares indiscriminately – to the point of accumulating all the available shares of some companies – without impairing the functioning of capital markets betrays a shocking ignorance of what capital markets are there for. They exist to move capital from owners to the most efficient users via share price signaling. Buy up all the shares and prices stop fluctuating, which deadens the signals the markets send to capital allocators. Capital then has no idea where to go, and really bad decisions become the norm.

3. If government becomes the biggest shareholder of the largest companies, in effect the former has taken over the latter. Is this just a backdoor way to achieve the nationalizations that failed so miserably in post-War Europe and elsewhere? The folks now in charge might view this as a positive side-effect when in reality it’s a mortal threat to pretty much everything that sets the modern world apart from the feudalism of the previous 10,000 years.

Can this go on forever? There seems to be a growing assumption that the elites have finally figured out how to turn a capitalist system into a perpetual motion machine by having central banks buy up all financial assets. In this way they can set prices for everything pretty much forever, thus eliminating the business cycle and ushering in a golden age of government-guided growth and prosperity.

This is classic “peak of the cycle” thinking, and the more widespread it becomes the closer the system is to breaking down. In 1999 lots of people saw the tech bubble as permanent because government would be loath to give up all that capital gains tax revenue (and the Greenspan put had recently been established). In 2006 home prices would rise forever because the government considered home ownership central to the idea of the American dream and would keep interest rates low and regulations benign until literally everyone had a house of their own.

The idea that stocks and bonds will always rise because governments will always buy them is just as widely accepted today as those previous delusions were in their time. And it’s just as crazy.