This is the first part of a series of articles (I don't know how many, I'm not done yet) designed to explain what is easily THE most important, albeit poorly understood (even by professionals) market on this ball of dirt.

Eurodollars: What Are They?

To best explain what Eurodollars are we start with the English language.

You see, while English belongs to the Brits it is at the same time the undisputed, undefeated heavyweight champion of the world's languages. You can be in Marrakesh, Ulan Bator, or Shanghai, and buy yourself a cold beer, swear at a taxi driver, and discuss the weather with a lady called Mei at the train station - all without changing language once.

Sure, you may have to strain your ears to understand Singlish in Singapore, and Texans have their own version of most everything, so why not English?

Australians always sound like they’ve had too much to drink (which is entirely possible), and at the speed that Kiwis talk it’s no wonder they were exiled to live in a land with more cattle than humans. Hell, even in the birthplace of the English language you’d be found scrunching your face, straining your ears, and begging for sign language instead when conversing with a Geordie. And heaven forbid you find yourself in a pub full of drunken Glaswegians.

Still, English is the grease in the cogs of global communications and so it is with dollars in global finance.

So eurodollars are essentially all those dollar deposits outside of the US banking system. They are NOT nor have ANYTHING to do with that ridiculous monetary experiment called the euro which wasn’t yet a twinkle in the eye of European bureaucrats, let alone a bump in the womb of Europe, when eurodollars first came into existence.

Eurodollars got their name originally from US dollar deposits in European banks, and in fact their origins date back to the communist days when the Ruskies and Chinese kept dollar deposits abroad (non-US banks) for fear of seizure. Today, however, they are dollar deposits in any bank outside of the US. So dollar deposits in Tokyo, Moscow, and London are all part of the eurodollar system. They are actually even more than simple dollar deposits, which I'll come to in a bit, but I don't want to confuse you with what is an incredibly complex market, so let's do this one step at a time.

What's It Got to Do With Europe and the Euro Currency?

What’s important to understand is that the eurodollar system is THE biggest source of global funding, bar none. Nobody knows for sure how large it is as it’s basically a large unregulated financing system with thousands of participants globally. But we do know that the eurodollar futures market on the CME is larger than S&P futures, larger than oil futures, larger, in fact, than the 10-year bond futures. It's estimated over 90% of international trade is financed through the eurodollar market. As Trump would say: it's yuuuge!

In fact, when cash settled eurodollar futures contracts were introduced to the CME in 1981 it was immediately the largest trading pit ever. 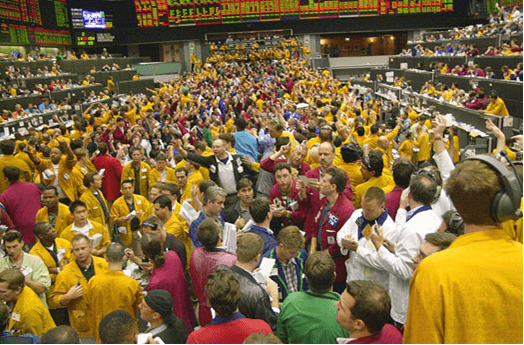 That so few investors know about this enormous market, its importance, and relevance is frankly pretty shocking.

Understanding the eurodollar market goes a long way to understanding why, despite the greatest monetary intervention we’ve ever seen by central banks, we’ve remained in a contractionary environment. I, for one, learned precious little about eurodollars at university, and I know it's only lightly covered in MBA programs and the CFA which is simply mind boggling to me. But then I don't make up the syllabus and I've always said college is a waste of valuable time.

The eurodollar system is a global financing system regulated by no one, influenced by many, and directly or indirectly affecting every asset price globally. Think of it as a deposit and loan market for offshore dollars. It affects asset prices because it is the wholesale financing system most used in the world. To be clear: there exist wholesale financing in other currencies (the eurocurrency market) but the dollar accounts for an estimated 75% of the eurocurrency market. It is the big Daddy.

It is a critical component to how banks fund and manage their liability structures. It's also worth pointing out that the eurodollar market is almost entirely a cashless market. It is for simplicity sake, banks' balance sheets.

The advent of technology in finance has allowed for real time matching of assets and liabilities across financial institutions and the balancing of what are essentially banks' balance sheets enacted with eurodollars. It is to a certain extent as close to a virtual currency as a real virtual currency like Bitcoin. Very efficient, close to instantaneous, and, in the case of eurodollars, allows for the tapping of huge pools of capital, which can be freed up for financing.

Why Should I Care?

Good question, always worth asking. Otherwise you risk landing up being an intellectual - great at cocktail parties, full of smart things to say, but broke. After all, what good is information you can't or don't execute on?

The eurodollar financing market took a massive blow to the skull back in 2007, which makes sense given that so much collateral was wiped from the system (the topic of my next article on this).

What is both fascinating and scary at the same time is that despite all of the central bank QE programs collateral has failed to come back into the system. It's as if the eurodollar market is suffering from concussion. We know this by looking at the eurodollar market which has never regained levels seen back in 2007.

This is deeply disturbing, and the actions taken by central banks have actually sucked high quality collateral from the system. And it is this collateral which has traditionally underpinned the wholesale funding markets, the largest of which is the eurodollar market.

Remember in 2008 when the Fed, in a blind panic, opened dollar swap lines, which they deployed in an unlimited fashion and which actually got to about $600 billion that year?

Well, what was happening was that even though the Fed had taken a chainsaw to the Fed funds rate and opened the credit spigot to full throttle, the international money markets never responded. LIBOR, which I'll get to in a jiffy, remained elevated, which means the offshore dollar financing market was still bricking itself.

I'll cover the reasons for WHY this was and still is the case in next week's article, but for now now simply remember that, despite unlimited swap lines between the Fed and global central banks, the dollar shortage wasn't ever resolved.

The other thing this tells us is that there is a chronic dollar shortage in financial markets, and existing dollar financing is only going to continue to be constrained as the dollar moves higher.

This creates a feedback loop whereby, in order to decrease risk, market participants either hedge dollar risk (where their collateral is in other currencies but they have USD costs somewhere in their cost structure - think European manufacturers using US technology for example). These guys hedge this exposure by buying dollars and this pushes the dollar higher.

Or market participants reduce leverage by unwinding debt positions, and, in order to do so, they have to buy back dollars as they unwind what are short dollar positions. Once again, this pushes the dollar higher.

Ok, so Trump's promised to bring jobs back to America. It's protectionism writ large. He's promised to lower tax rates to incentivise those jobs to return to the US.

Whether he manages to do this or not we'll have to wait and see. To be clear I'm unconcerned with whether this is a good or bad thing or whether Trump is an angel or a demon. I'm only concerned with what takes place and how I can profit from outcomes.

That said, understand that there's an estimated $3 trillion in corporate US profits sitting offshore. What happens if Trump manages to pull this off?

I'll tell you what happens. Those dollars move OUT of the eurodollar market, a market already starved of dollars, back into US banks. Uh oh! And this brings me to eurodollar futures.

Eurodollar futures are NOT currency futures.

Eurodollar futures, on the other hand, are nothing like this as they are in fact cash settled futures contracts whose price moves in response to the interest rate offered on those dollar time deposits held in offshore (non-US) banks.

They are therefore interest rate products not currency futures and this is why I just said that this market is the best market in the world to understand global risk.

These loans or time deposits between banks are reflected in an average rate of interest charged. This is the London Interbank Offered Rate (LIBOR).

The rate at which banks are borrowing from and lending to each other is therefore a derivative of the eurodollar market.

The essence of the eurodollar market is that it provides us a window into where the crowd thinks LIBOR will be at a point in the future. So eurodollars are all about expectations of the future. 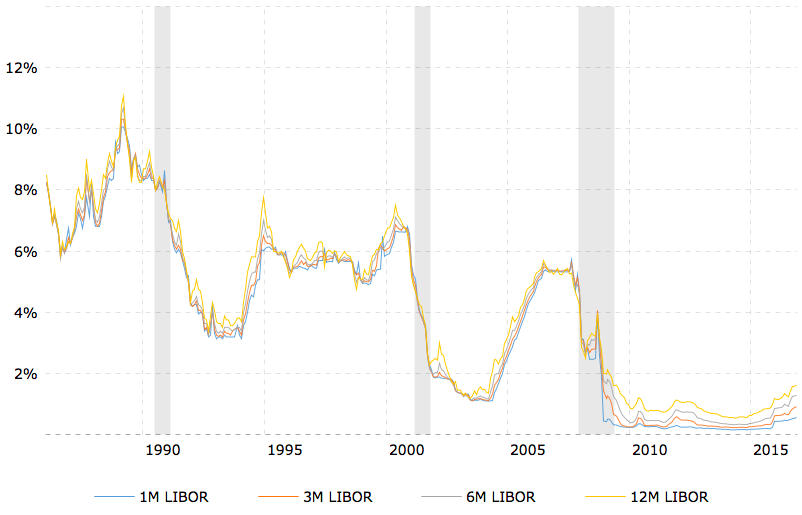 Will the Fed Hike in December?

LIBOR, which indicates the pricing of risk in the eurodollar market, IS the market. Take a look at the chart above. Right now it's telling us we'll get a rate hike in December. Don't believe me? Why don't we wait and see, shall we?

The eurodollar market is the world's largest and most important funding market.

How it functions, how it used to function pre-GFC, and how it has largely broken down since the 2008 crisis is key to understanding global capital flows in the financial markets. Everything from equities to fixed income, and indeed currencies, is affected. It is indeed pivotal to the Insider alert you've just received if you're a member of our Insider circle so you'll know what I'm talking about and if we're correct there exists extraordinary asymmetry in being on the right side of what's happening here.

I'll follow up with part II where I will go into why the eurodollar market isn't functioning properly, who's to blame, and what this means to us as investors.