The Trump Christmas stock market rally has taken valuations beyond a point that in the past has signaled trouble, which in turn has generated a lot of cautionary press like the following:

(CNBC) – While the S&P 500 is reaching all-time highs on optimism over Donald Trump’s economic agenda, some Wall Street strategists are increasingly worried about a widely followed valuation measure that’s reached levels that preceded most of the major market crashes of the last 100 years.“The cyclically adjusted P/E (CAPE), a valuation measure created by economist Robert Shiller now stands over 27 and has been exceeded only in the 1929 mania, the 2000 tech mania and the 2007 housing and stock bubble,” Alan Newman wrote in his Stock Market Crosscurrents letter at the end of November.

Newman said even if the market’s earnings increase by 10 percent under Trump’s policies “we’re still dealing with the same picture, overvaluation on a very grand scale.” 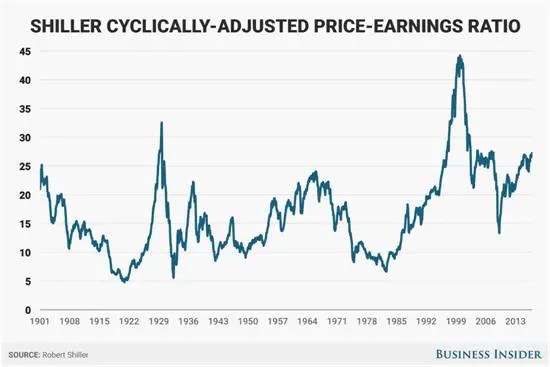 Other academics agreed the current extreme CAPE ratio of 27.7 is a worrying sign for future returns versus bonds.

“Only when CAPE is very high, say, CAPE is in the upper half of the tenth decile (CAPE higher than 27.6), future 10-year stock returns, on average, are lower than those on 10-year U.S. Treasurys,” Valentin Dimitrov and Prem C. Jain wrote in paper titled “Shiller’s CAPE: Market Timing and Risk” on Nov. 17.

Even based on the more common price-earnings ratio, the market looks rich. The S&P 500’s P/E based on earnings of the last 12 months is 18.9, the highest in more than 12 years, according to FactSet.

“U.S. valuations start off as being high both on a historical basis and also on a peer group. Certainly based on the Shiller PE, the equity market seems expensive,” Jefferies chief global equity strategist Sean Darby wrote on Nov. 29.

The above chart requires a bit of interpretation, mainly because of that spike in 1999 which seems to imply a much higher ceiling for stock valuations. It probably doesn’t, because of the uniquely delusional nature of the tech stock bubble. That market was driven by newly-minted dot-coms and related companies that in many cases had minimal or no earnings, so prices weren’t related to profits. In other words, you can’t calculate a price/earnings ratio if there are no earnings.

“Eyeballs” – that is, the number of people visiting at a dot-coms’ website – had temporarily replaced traditional valuation measures in the hearts of speculators. With disastrous results.

Today’s market, in contrast, is made up of companies with actual earnings, so it might be safe to discount 1999 and use the rest of the chart for comparison. In which case current equity prices look extremely dangerous.

On the other hand, today’s world has departed from past business-as-usual in other ways that might be relevant. Debt no longer seems to matter – witness the US, after doubling the federal debt in a single presidential administration, installing a new president whose platform calls for massive increases in borrowing and spending.

And while monetary policy is past eras operated in an at least partially-constrained environment, today there are apparently no limits on how low interest rates can go or how many and what kinds of assets central banks can buy with newly-created currency.

The Japanese and Swiss national banks, for instance, are already huge buyers of equities. If the Fed decides to join that party – something that Chairwoman Janet Yellen has already publicly considered – then it’s not clear whether P/E ratios will continue to matter. The unlimited printing press is definitely an argument for “this time is different.”

So is it no longer possible to make predictions based on pre-QE history? Or are there financial and economic laws that apply no matter what crazy new tools the world’s governments decide to employ?

Almost certainly the latter. Manipulating one part of the system – by, for instance, buying equities with newly-created currency – just shifts the pressure of financial imbalances to a different, harder-to-control place.

Lately the bond market has begun to show signs of stress – because who wants to own zero-coupon long-term bonds in a world where governments need higher inflation and are willing to do pretty much anything to get it?

What happens if governments respond to bond market turmoil by creating even more currency and buying up all the long-term bonds, as Japan is currently doing in its own market? The pressure will shift to the foreign exchange markets, because who will want to own fiat currencies that are being created at rates far exceeding the growth of the real economy?

Fiat currencies are the one thing governments can’t buy up with newly-created money. All are at the moment falling in relation to artificially-inflated stock and real estate prices, though we don’t notice because currencies are valued against each other. But let a soaring money supply translate into rising general prices (something the bond market is now signaling) and it’s game over. Governments will face rising instability without tools capable of managing it.

At which point we’ll return to the above chart and wonder why we didn’t trust history?