This is all getting perfectly out of hand. How to best explain this one? Let's see if I can do it in less than 500 words. Louise Mensch runs a conservative 'up and coming' start up website called HeatSt. They are owned by News Corp under the large umbrella of Dow Jones. In other words, not so start up. Also, and it's worth noting, HeatSt is the very definition of controlled opposition. HeatSt has the look and feel of being spartan and authentic, but under its deceptive facade are corporate cucks toiling away for globalism. Louise was outed during the Presidential campaign for being as shill, who worked in private for the Clinton campaign. Her followers were quite shaken about that and let her know it by giving her hell on Twitter. I suppose being a liar and deceiving her audience wasn't enough for Louise. Now she wants WORLD WAR 3, literally -- all because her little email was hacked into and she was outed for being a duplicitous mountebank. Her Twitter feed reads like an insane anti-Putin screed by a would-be serial killer. But I managed to cobble together the money shots -- courtesy of The Donald. 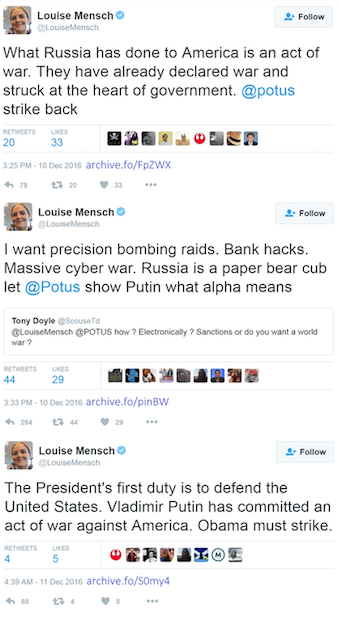 Louise is a former British MP living in the states, with a keen interest in making American bleed. It's a wonderful thing when emotions cause people to reveal who they truly are. Before making such moronic comments, I suggest Ms. Mensch should read up on Russia's nuclear capabilities and understand the ramifications of starting armed conflict with a nation who can ferry over ICBMs at mach15 to our cities.

A simpler solution a precision brain surgery on @LouiseMensch to improve her reasoning abilities. https://t.co/9ATf8QC7BC