How dare Brian Stelter, so called 'journalist' at CNN, retweet an obvious prank by some dipshit named Adam Saleh -- over what he sensationalized to be ISLAMOPHOBIA at the hands of a fine American company called Delta Airlines. The claim by the very flamboyant and effeminate Adam Saleh was that he was merely talking a barbarous version of Arabic to his Mother, to which was met with an unrelenting form of ISLAMOPHOBIA by the employees at Delta, who quickly ferreted him off the fucking plane for obvious fears that he was about to stage a terrorist event by way of hijacking or shoe bomb detonation. Little did the plebian employees know that Adam was just an effete member of the youtube theatre, playing tricks on the people, hoping to cash in on his adsense ads on his stupid videos. In other words, he was full of shit. A simply cursory google search would've produced such valuable information, something the CNN journalist named BRIAN STELTER didn't bother to do. Mr. Stelter didn't bother to do a cursory search on Adam Saleh, instead opting to RETWEET his salacious story, because he's a very dumb man -- a stone aged type of person with savage qualities occupying a very low station in life. Most of the time Mr. Stelter is busy putting out stories about FAKE NEWS, while at the same time creating his own FAKE NEWS. The main stream media today is an active practice of a nonsensical nature, very Kafkaesque for you literary and Orsen Welles aficionados. Here's Brian making fun of himself. 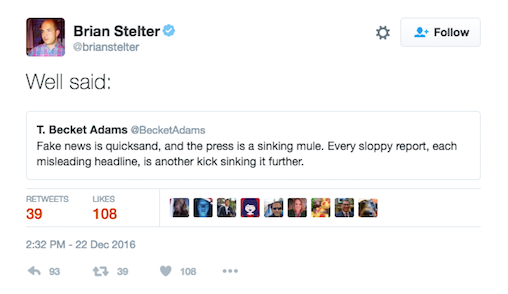 The bow-tie less Tucker Carlson calls out Mr. Stelter, and the media as a whole, for being very stupid, falling for the oldest tricks in the book.