Rand Paul Introduces Bill to Audit the Fed, Says it Has Trump Support

Literally nothing is going to happen here. Let's not pretend Congress will actually pass a Rand Paul bill that simply requests for the Federal Reserve to be audited. After all, they're the central bank for the world now, rigging markets and fixing rates almost on demand. There are a lot of people with a lot of questions for the Fed -- an entity who presides over an unlimited balance sheet and the power to both print fiat currency at will and to increase the amount of interest it charges the U.S. government. Any person or entity under the auspices of the SEC or FINRA is forced to undergo routine audits, just to make sure everything is kosher. Why isn't the same standard used for the Fed? Rand Paul wants to change that and he says it has the support of President elect Trump.

On Tuesday, U.S. Senator Rand Paul reintroduced his Federal Reserve Transparency Act, widely known as the “Audit the Fed” bill, to prevent the Federal Reserve from concealing vital information on its operations from Congress. Eight cosponsors joined Senator Paul on the legislation.   Representative Thomas Massie (KY-4) has introduced companion legislation, H.R. 24, in the U.S. House.   “No institution holds more power over the future of the American economy and the value of our savings than the Federal Reserve,” said Sen. Paul, “yet Fed Chair Yellen refuses to be fully accountable to the people’s representatives.”   “The U.S. House has responded to the American people by passing Audit the Fed multiple times, and President-elect Trump has stated his support for an audit. Let’s send him the bill this Congress.”   “The American public deserves more insight into the practices of the Federal Reserve,” said Rep. Massie. “Behind closed doors, the Fed crafts monetary policy that will continue to devalue our currency, slow economic growth, and make life harder for the poor and middle class. It is time to force the Federal Reserve to operate by the same standards of transparency and accountability to the taxpayers that we should demand of all government agencies.”   On January 12, 2016, a bipartisan Senate majority voted 53-44 in support of Audit the Fed.   S. 16 would require the nonpartisan, independent Government Accountability Office (GAO) to conduct a thorough audit of the Federal Reserve’s Board of Governors and reserve banks within one year of the bill’s passage and to report back to Congress within 90 days of completing the audit.   Audit the Fed would amend section 714b of Title 31 of the U.S. Code to allow the GAO to fully audit:   transactions for or with a foreign central bank, government of a foreign country, or nonprivate international financing organization;   deliberations, decisions, or actions on monetary policy matters, including discount window operations, reserves of member banks, securities credit, interest on deposits, and open market operations;   transactions made under the direction of the Federal Open Market Committee; or   a part of a discussion or communication among or between members of the Board and officers and employees of the Federal Reserve System related to clauses (1)–(3) of this subsection. 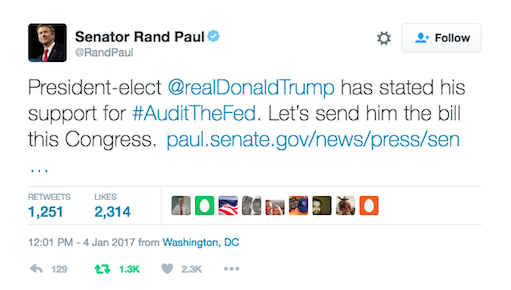 Isn't anyone interested in learning how this happened and how they intend to unwind it? 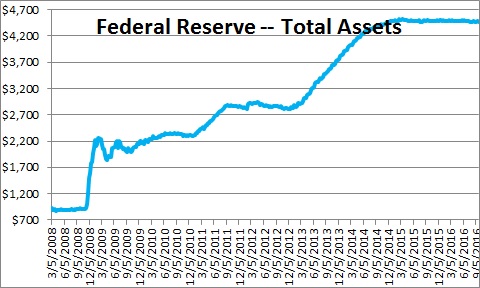