WTF Chart Of The Day: VIX At Pre-Crisis Lows, Uncertainty At All-Time Highs

Recently, we have highlighted a number of divergent trends between ‘soft’ data and ‘hard’ data in both Europe and the US. For the most part, improving survey responses remain unconfirmed by the quantifiable information currently available. The surge in the economic policy uncertainty index is no exception.

In 2016, uncertainty rose around the world, led by the UK (unsurprisingly). 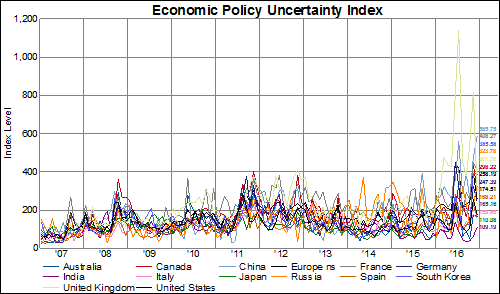 With that rise in policy uncertainty, we would have expected to see an increase in market volatility. After all, through 2015, major spikes in the simple average of the above policy uncertainty indexes coincided with a significant (above 30) rise in the VIX. 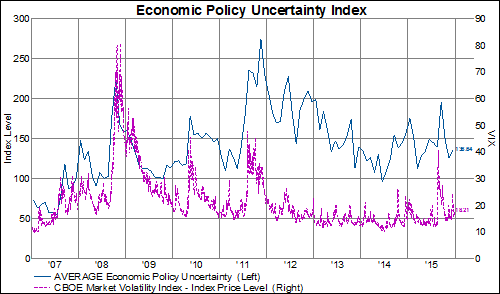 Last year, with the exception of a Brexit-related spike to 26 and an even smaller surge in reaction to the US election in November, the VIX averaged just under 16 (about 25% lower than its ten-year average of more than 21). 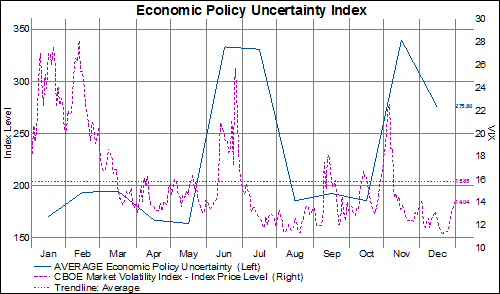 While the average level of economic policy uncertainty fell somewhat from November to December, it remains quite elevated versus the VIX at 11.49 today (about one point above its low near 10 back in early 2007).

In a reversal of the trends we have observed elsewhere in economic data (positive survey data, unconfirmed by the numbers themselves), the ‘hard’ data from markets here seems to be telling us everything is a-ok while the policy uncertainty data would indicate cause for concern.

#China economic policy uncertainty index - how do you say parabolic in Chinese? pic.twitter.com/HBCEf9PUL0