The Three Lives Of Alan Greenspan... And Why The Third Won't Redeem The Second

When the history of these times is written, former Fed Chair Alan Greenspan will be one of the major villains, but also one of the greatest mysteries. This is so because he has, in effect, been three different people.

He began public life brilliantly, as a libertarian thinker who said some compelling and accurate things about gold and its role in the world. An example from 1966:

…In the absence of the gold standard, there is no way to protect savings from confiscation through inflation. There is no safe store of value. If there were, the government would have to make its holding illegal, as was done in the case of gold [in 1934 under FDR]. If everyone decided, for example, to convert all his bank deposits to silver or copper or any other good, and thereafter declined to accept checks as payment for goods, bank deposits would lose their purchasing power and government-created bank credit would be worthless as a claim on goods. The financial policy of the welfare state requires that there be no way for the owners of wealth to protect themselves.

This is the shabby secret of the welfare statists’ tirades against gold. Deficit spending is simply a scheme for the confiscation of wealth. Gold stands in the way of this insidious process. It stands as a protector of property rights. If one grasps this, one has no difficulty in understanding the statists’ antagonism toward the gold standard.

Awesome, right? But when put in charge of the Federal Reserve in the late 1980s, instead of applying the above wisdom — by for instance limiting the bank’s interference in the private sector and letting market forces determine winners and losers — he did a full 180, intervening in every crisis, creating new currency with abandon, and generally behaving like his old ideological enemies, the Keynesians. Not surprisingly, debt soared during his long tenure. 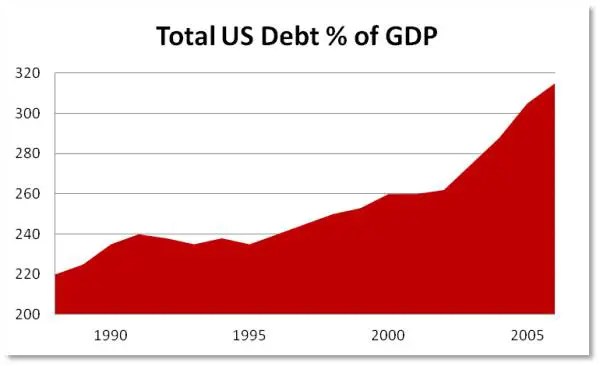 Along the way he was instrumental in preventing regulation of credit default swaps and other derivatives that nearly blew up the system in 2008. His view of those instruments:

The reason that growth has continued despite adversity, or perhaps because of it, is that these new financial instruments are an increasingly important vehicle for unbundling risks. These instruments enhance the ability to differentiate risk and allocate it to those investors most able and willing to take it. This unbundling improves the ability of the market to engender a set of product and asset prices far more calibrated to the value preferences of consumers than was possible before derivative markets were developed. The product and asset price signals enable entrepreneurs to finely allocate real capital facilities to produce those goods and services most valued by consumers, a process that has undoubtedly improved national productivity growth and standards of living.

He cut interest rates to near-zero in the early 2000s, igniting the housing bubble – which he was unable to detect along the way. He even made it into the dictionary, as the “Greenspan put” became the term for government bailing out its Wall Street benefactors.

From this the leveraged speculating community learned that no risk was too egregious and no profit too large, because government – that is, the Fed – had eliminated all the worst-case scenarios. Put another way, under Greenspan profit was privatized but loss was socialized.

Greenspan retired from the Fed in 2006 and, miraculously, began morphing back into his old libertarian self. A cynic might detect a desire to avoid the consequences of his past actions, while a neurologist might suspect senility. But either way the transformation is breathtaking. Consider this from yesterday:

(Kitco News) – It would be best not to be short-sighted when it comes to gold; at least that is what one former Fed chair says.

“[T]he risk of inflation is beginning to rise…Significant increases in inflation will ultimately increase the price of gold,” noted Alan Greenspan, Federal Reserve chairman from 1987 to 2006, in an interview published in the World Gold Council’s Gold Investor February issue.

“Investment in gold now is insurance. It’s not for short-term gain, but for long-term protection.”

To Greenspan, the reason why the gold standard hasn’t worked in the past actually has nothing to do with the metal itself.

“[T]here is a widespread view that the 19th Century gold standard didn’t work. I think that’s like wearing the wrong size shoes and saying the shoes are uncomfortable!” he said. “It wasn’t the gold standard that failed; it was politics.”

One of the nice things about the information age is that public figures leave long paper trails and can’t therefore easily escape their pasts. Greenspan’s past, being perhaps the best documented of any central banker in history, will haunt him forever.

But hey, at least he’s going out a gold bug.