Submitted by Jeffrey Miller via StockResearch.com,

Baby
I know you're asking me to stay
Say please, please, please, don't go away
You say I'm giving you the blues
Maybe
You mean every word you say
Can't help but think of yesterday
And another who tied me down to lover boy rules
George Michael, Faith, 1987

Before we jump in, many of you have been asking for more information about these markets.

There are quite a few markets in which you gotta have a lot of faith in everything going right in order to make decent returns from here.  In short, most financial markets are priced if not for perfection, then for not a lot of bad stuff to ever happen again. But as we all know, bad stuff does happen, and often, not in isolation.  Bad things happening when valuations are inexpensive is survivable.  Bad things happening when valuations are near all-time highs is not.  At least not if you’re in a passive, long-only, market-cap or “smart-beta” weighted index fund or ETF.  If you’re in one of those when bad things happen, you’re going to be praying that if God (or the deity of your choice) just lets you get back to even, you’ll never blindly invest in unhedged vehicles again.  At least until the end of the next cycle...

So which asset classes are most at risk right now?  I’d start with credit, in particular US High Yield and European Corporate credit.  On Thursday February 16, 2017, the BofA Merrill Lynch US High Yield spread was 3.83% over the spot Treasury curve.  This measures pure credit risk.  So the High Yield market today is only asking for 383 bps of credit spread 8 years into a recovery and with the benchmark bonds to which it is pegged at nearly 140 year lows (or 5000 year lows depending on which bond you use).  So you’ll have big losses if spreads widen, along with pure basis risk if rates rise.  Your probability of making a lot of money is low, while your probability of incurring large losses is high.  Who would buy this crap at this point in the cycle?  Oh right, those institutions that don’t have a choice.  Insurance companies, pension plans, and other large investors with a mandate to own a somewhat fixed mix of stocks and bonds are forced buyers no matter the risk.  They will blindly follow their asset allocation models right off a cliff.  Credit markets are very complacent, despite the fact that we have the following happening right now:

Now think about the first 4 weeks of the new Trump Administration.  Has it gone well?  Or, maybe, no matter your political leanings, has it been a little different than normal?  And now do the math.  4 weeks is less than 2% of Trump’s first term.  Think everything will be low vol for the next 4 years?  Ok, now look at these next three charts and tell me what looks off.

US High-Yield Credit Spreads are near all-time lows.  Risk is definitely on right now.

P/E multiples are 1 standard deviation above the mean while bond yields are near lows. 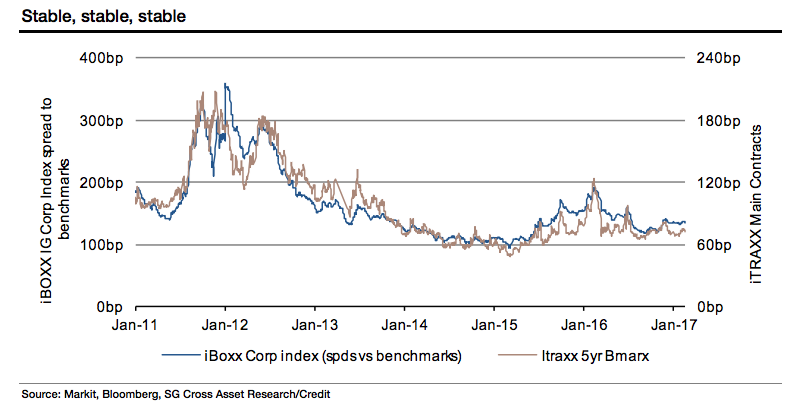 ?Well the rally in the U.S. is different you may say.  The U.S. is about to get tax cuts and regulatory relief.  Banks in particular have driven the recent rally, as they are expected to benefit from the above 2 factors along with rising interest rates to boot.  So banks have been on fire, with financials contributing 62 of the 208 point gain in the S&P 500 since election day. Of this gain, nearly all was from forward P/E multiple expansion on the expectation that the above will become a reality.  But in essence, if you are long banks here, you are making the mother of all geopolitical bets – you are assuming that a Congress that doesn’t particularly like the President very much (this goes for Republicans and Democrats alike) will align behind him to pass his agenda.  This may happen.  But stocks are already pricing that in now.  So basic common sense would tell you that the prudent thing to do would be to trim back your exposures and hold cash, right?   Well that’s not what the market is doing… 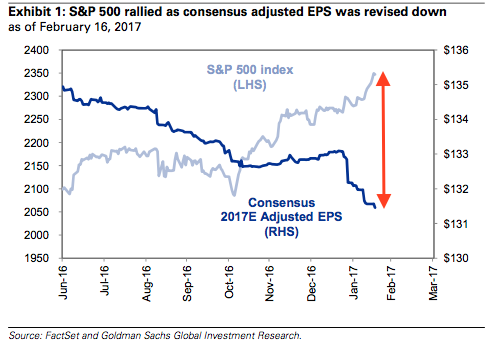 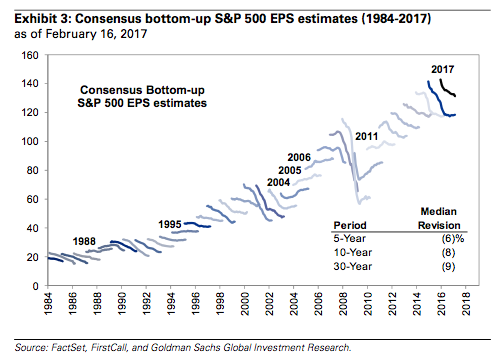 See how all the lines slope downward?  That’s analysts cutting estimates over time. So don’t expect this year to be any different.

Before this river
Becomes an ocean
Before you throw my heart back on the floor
Oh baby I reconsider
My foolish notion
Well I need someone to hold me
But I wait for something more
George Michael, Faith, 1987

So let’s recap:  bond yields are still near all-time lows, with some exogenous shock potential clearly on the horizon.  An investor in bonds today is  hoping that the Fed and other central bankers know what they are doing and can somehow save them from themselves when credit inevitably blows up and there’s an ocean of sellers. But the Fed and ECB are full of fools that are insulated from reality.  They operate in bubble world of their own creation that is filled with academics and syncophants, and when the next crisis comes, they will be as surprised as anyone and clueless as to how to react.

Seems harsh?  I think I’m being realistic.  Don’t believe me?  Read Danielle DiMartino Booth’s excellent new book, Fed Up.  She was inside the Fed as Richard Fishers right-hand woman, and she’s written an eye-opening expose’ of just how insular and myopic (her words) the Fed really is.  You can buy a copy here (I don’t get paid for this recommendation, I’m just providing a link).  I got my copy on Friday night and finished it Sunday morning.  Here are some eye-opening quotes for those who still think the Fed has a clue about what’s happening and how to handle markets.

“Assuming that the FRB/US model does a good job of capturing the macroeconomic implications of declining house prices, such an event does not pose a particularly difficult challenge for monetary policy,” said John Williams, a top analyst at the San Francisco Fed, during the debate. (He would later become the bank’s president.)

“The model showed the economy could weather a 20% drop in home prices with small increases in unemployment and modest cuts in interest rates.”  FOMC meeting, June 2005

When I read that I almost screamed out loud.  They had a @#$#& model that showed that the economy could weather a 20% drop in home prices with small increases in unemployment?   In 2005?  Why didn’t anyone say “That makes no sense whatsoever.  The model is clearly broken?”  And yet…every few months we trot out these morons with their models to tell us all is ok.  I call B.S.  They don’t have a clue.  Don’t believe me?   Another interesting fact in the book is that despite having over 1,000 economists with PhDs at the Fed, their studies, most of which are written for academic journals, are no more accurate than a coin flip and many cannot even be replicated.  When asked why they used a measure of inflation that removes food and energy (the core PCE), the answer is that their mathematical models of the economy don’t work unless they do.  When told this in a meeting, James Bullard exclaimed, “Crap in, crap out?  That’s how we make policy?”

There are many more quotes like these.  But after the crisis, the institutional myopia (DiMartino Booth’s word) that plagued the Fed must have been rectified, right?  Wrong. Apparently nothing has changed.  We’re going to head into the next crisis with the same academics applying the same mathematical models to problems they don’t see coming and don’t understand.

There is a lot more to discuss about these markets, but this letter is already too long.  If you want to get the rest of my thoughts, just email me at jmiller@stockresearch.net and I will send you the latest Miller’s Market Matrix with more analysis.

“The risk of an outright downturn has receded along with the early signs of stabilization of housing markets. In summary, I believe that a soft landing is the most likely outcome over the next year or two.”  Janet Yellen, February 2007.  From Fed Up by Danielle DiMartino Booth

SPY Trading Levels: Once the SPY broke above our resistance at 228 its been straight up.  There aren’t a lot of headwinds.  Volatility remains exceptionally low.  Be careful out there.

Resistance: Not a lot.  It will take macro/geopolitical issues to turn the market down right now.