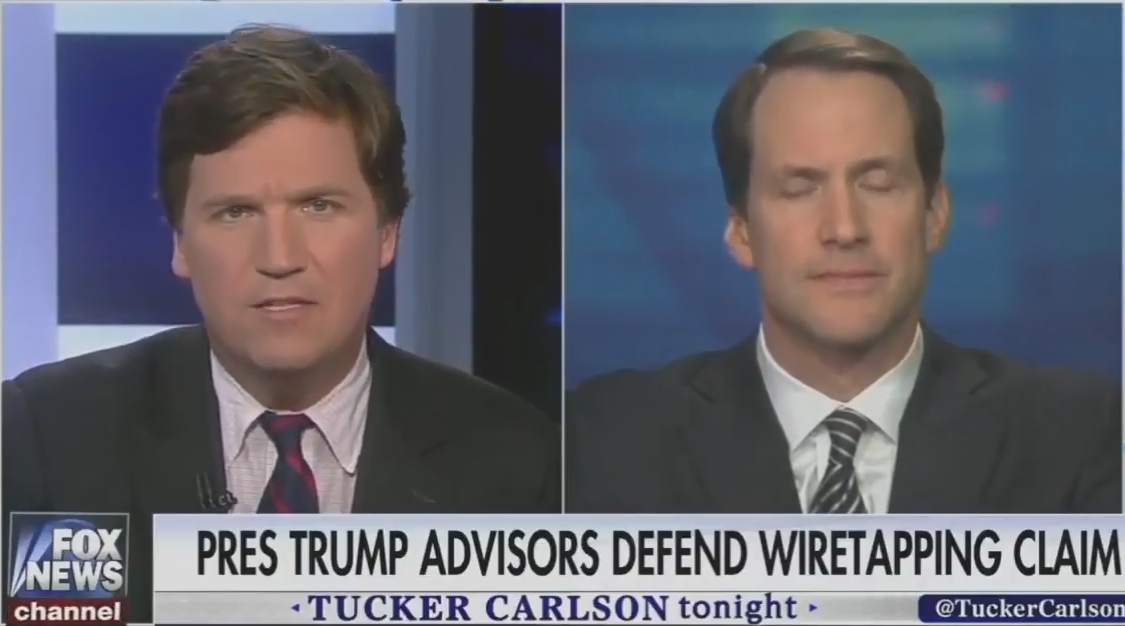 Last night, Tucker Carlson debated a rapidly blinking Rep. Jim Himes (D-CT) - a member of the House Intelligence Committee, on claims that former President Obama ordered a wiretap of Donald Trump's administration during the election. Tucker went into the interview giving Himes the respect of an unfurrowed brow, which did not last long. While the entire interview was an insightful sparring match (entire interview here), a particularly interesting moment came when Himes effectively laid out the legal mechanism which would justify spying on members of Trump's campaign, including incoming NSA director Mike Flynn - the fruits of which led to acting Attorney General (and Obama appointee) Sally Yates warning the Trump administration that Flynn had not been truthful about his conversations with Russia, and could possibly be blackmailed. This knowledge, and the leak of the story leading up to Flynn's eventual resignation, could only have been obtained through covert surveillance.

In a response to Tucker - Himes suggested that since it's routine for US Intelligence to monitor foreigners "like the Russian ambassador" who will sometimes "be talking to US persons," it's reasonable to expect that in the normal course of surveillance of foreigners, Americans might be monitored as well.

This was a half-baked answer considering the well known scope and use of the surveillance in question as a political weapon - leaked to various news organizations and spun into half-truths and wild accusations in an attempt to delegitimize Donald Trump. At the end of this partisan rabbit hole, the FBI, NSA, and the CIA have all said that there was no evidence of collusion between the Trump campaign and the Russians.

On the topic of surveillance:

The Tucker interview goes hand in hand with a well reasoned series of tweets made over the weekend by Michael Doran - Senior Fellow at the Hudson Institute and an expert on international politics of the Middle East. Doran laid out quite an interesting scenario - suggesting that while Trump may not have specifically been targeted, the Intel community may have indirectly targeted him similar to a "dolphin "accidentally" caught in a tuna net." (#15 below). Doran also summed his tweets up in a WSJ article:

In mid-January both the BBC and McClatchy reported that on Oct. 15 a Foreign Intelligence Surveillance Act court approved an investigation into Russian activities in the U.S. that focused on nameless Trump associates—three of them, according to the BBC. Also in mid-January, the New York Times reported on “a broad investigation into possible links between Russian officials and associates of [Mr.] Trump.”

Stipulating that they were, the government would find itself monitoring all of Mr. Trump’s calls with one of his political advisers, his lawyer and his national security adviser. Transcripts of those intercepts would be available to the Obama administration’s senior national-security officials. In this scenario, the tapping of Mr. Trump’s calls would be extensive -WSJ

1. Why I Take Trump’s Claims of Wiretapping Seriously: An Essay in 30 Tweets

Why I Take Trump’s Claims of Wiretapping Seriously: An Essay in 30 Tweets