Saudi Arabia has been an interesting tap-dance for Donald Trump. During the 2016 election, Wikileaks revealed that the house of Saud heavily contributed to the Clinton Foundation, and reports surfaced that they funded 20% of Clinton's campaign. It's clear they had a lot riding on Hillary, some say in the hopes of co-opting the US military into an intervention in Syria to topple President Bashar al-Assad. The plan was regime change - with the goal of installing yet another Western friendly puppet government which would rubber-stamp a lucrative Saudi/Qatar pipeline through the country, exiting into the Mediterranean through Turkey - as opposed to a competing Russian / Iranian / Syrian pipeline. 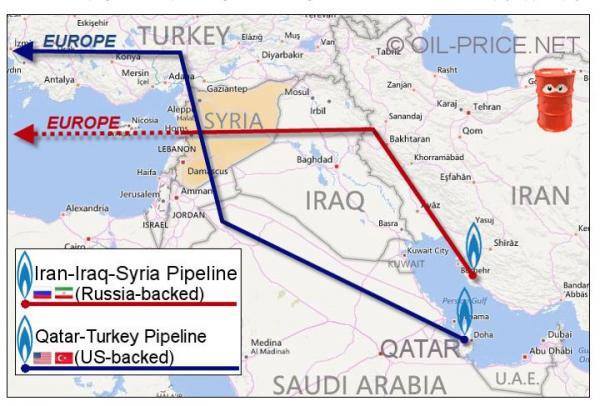 Wikileaks also revealed that Saudi Arabia and Qatar funded ISIS - which then invaded Syria in an effort to co-opt the Arab spring and topple Assad. Recall that Hillary's plan was to join ISIS in this fight, starting with the institution of a "no fly" zone which would have put the United States in direct conflict with Russia.

So it's abundantly clear that Hillary Clinton was set to use United States military assets at the behest of Saudi Arabia - first for regime change in Syria, and then in Saudi Arabia's confict with Yemen as the next logical target. It also emerged that Hillary's right hand woman Huma Abedin has had ties to the Muslim Brotherhood which still haven't been investigated. Note that turncoat shill John McCain chastised Rep. Michele Bachman (R-MN) for pointing this out - which should tell you something. In addition, a former Muslim Brotherhood member turned peace activist, Walid Shoebat said in an interview with Front Page Magazine:

The Abedins for decades were actually serving a foreign entity, the government of Saudi Arabia’s Ministry of Islamic Affairs, and not American Democracy as President Obama stated. -FrontPage

So - given the Saudi / Clinton connection, many found it surprising that Donald Trump didn't touch on much of it during the election. Instead, he harped on the fact that the wealthy oil nation doesn't "pay their fair share" for US troops in the region, and criticized the Saudis for not accepting Islamic Syrian refugees over concerns of terrorism. Going back to January of 2016, Trump stated that he would prefer to "protect Saudi Arabia" in order to maintain regional supremacy over Iran - despite the Saudis' notoriously deplorable treatment of women and gays.

Lo and behold, we may have our answer as to why; President Trump met with Israeli Prime Minister Benjamin "Bibi" Netanyahu in mid-February, where they discussed a coalition which included Egypt, Saudi Arabia, Kuwait, the UAE, Bahrain, Oman and Jordan- assembled to fight the Islamic State and curtail Iran's regional ambitions. So Israel is bedfellows with less aggressive Islamic nations in order to prevent Iran from nuking Tel Aviv, and Donald Trump and the USA have been roped into it.

It would also appear that in exchange for US support - Netanyahu agreed to Israel backing off of Palestinian settlements, with Donald Trump citing the need for the Israelis to "show some flexibility." During a joint press conference, trump mentioned a peace deal in the works - though details were scant:

But Bibi and I have known each other a long time -- a smart man, great negotiator.  And I think we're going to make a deal.  It might be a bigger and better deal than people in this room even understand.  That's a possibility.  So let’s see what we do. -WH

This would suggest that Trump's asking price for joining Israel's coalition is that Israel lay off Palestine - which President Obama implicitly demanded in late 2016 when the US abstained from a veto of a UN demand that Israel cease settlements. If, as some have suggested, the United States has been Israel's puppet for some time - these recent moves by Trump and Obama could be interpreted as rebellious acts.

In an interesting gesture of goodwill yesterday from the house of Saud, Saudi Deputy Crown Prince Mohammed bin Salman called Trump a "true friend of Muslims," claiming that the US President's immigration ban does not target Islam. A Trump senior advisor described the meeting as follows:

Although Washington and Riyadh had previously "undergone a difference of opinion," the Tuesday meeting "put things on the right track, and marked a significant shift in relations."

Meanwhile - despite Trump and the Saudi deputy Crown Prince's notably cordial meeting in the White House on Tuesday, in perhaps yet another act of rebellion against the Israeli / Saudi / et al. coalition, Secretary of State Rex Tillerson gave the UN an ultimatum; the US will leave the UN Human Rights Council unless they reform - kicking human rights violators such as China, Egypt, and recently added Saudi Arabia off the council. Interesting.

So on one hand the USA is now roped into a coalition with Saudi Arabia and Israel in order to keep Iran in check, and on the other hand, we are now demanding the UN punish the house of Saud by kicking them off the Human Rights Council.

Perhaps Trump is playing ball with Netanyahu in the mutual interest of crippling Iran's ability to develop nuclear weapons? Maybe he's using the UN Human Rights Council ultimatum as a way to protest Saudi Arabia while maintaining pressure on Iran? Or could it be that Trump knows the UN won't kick any of the those countries off the corrupt and highly politicized Human Rights Council - giving the United States justification to completely sever ties with the organization.

Wherever the truth lies, there are several dimensions to this chess game.