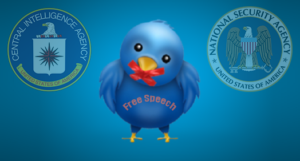 Ed Dowd (@DowdEdward), former manager of BlackRock's $15 billion Capital Appreciation Fund has a relatively small but influential Twitter following, ranging from Financial industry all-stars to prominent media personalities. Since leaving BlackRock, Dowd has shifted gears - moving to Hawaii to launch his own equity fund from the luxury of his volcano-adjacent compound, while helping his wife develop a rapidly growing business of her own. He's also quite the subversive Twitter user - known for spotlighting MSM hypocrisy, roasting progressive politicians, and doling out sharp-witted rebukes of Ivory Tower overlords.

In early February, Dowd began noticing some odd behavior occurring with his Twitter account; throughout the day he would gain followers as he tweeted, while late at night followers were disappearing! He began keeping track, and though it wasn't happening every night, it penciled out to around half a percent of his followers each time it happened, effectively capping his audience. Ed had questions; why was it almost always the same number of people? Who un-follows someone in the middle of the night? Considering most of Dowd's followers are in North America, the un-followers were likely asleep when it was happening. The logical conclusion was that Twitter had been actively pruning Ed's audience to limit his growth on the platform - but keep reading, it gets better.

This isn't the first time Twitter has throttled, censored, or banned conservatives who speak their mind. Documentarian, author, and noted Trump supporter Mike Cernovich (@cernovich) tweeted about his own fan base evaporating around the same time as Dowd began experiencing the un-follows:

Every day people are auto unfollowed. My real followecount closer to 1 million. pic.twitter.com/r38aSjtZDM

Others have noted the same phenomenon:

Twitter censorship! They're deleting follows, not allowed over 20.5k. Images marked sensitive. They must have voted #Hillary

In June of 2016, Twitter was accused of the same tactic against conservative pundit Milo Yiannopoulos (@Nero), shortly before he was was banned by the platform following a feud with SNL's Leslie Jones in which Milo called her "Barely Literate."

Found another 'unfollow' that I DID NOT UNFOLLOW ---> @Ayaan Nor would I have done. Added to list try to prevent #Twitter #Censorship antics

And now it's Retweets too!

After Ed Dowd noticed Twitter capping his follower count, he started paying closer attention to his tweets. Monday morning, Dowd made a decidedly subversive tweet pointing out that the NSA and CIA are "wiretapping" the entire country via continuously archived data collection - a story which Wired magazine broke in 2006 and gained tremendous clarity through the acts of whistleblower Edward Snowden.

When Dowd checked his twitter feed hours after sending the tweet, he saw that it had accumulated 13 Retweets and 38 Likes. Given the subject matter, he decided to take a screenshot. Lo and behold, upon reloading the tweet five minutes later, Dowd discovered that 11 retweets had mysteriously vanished! 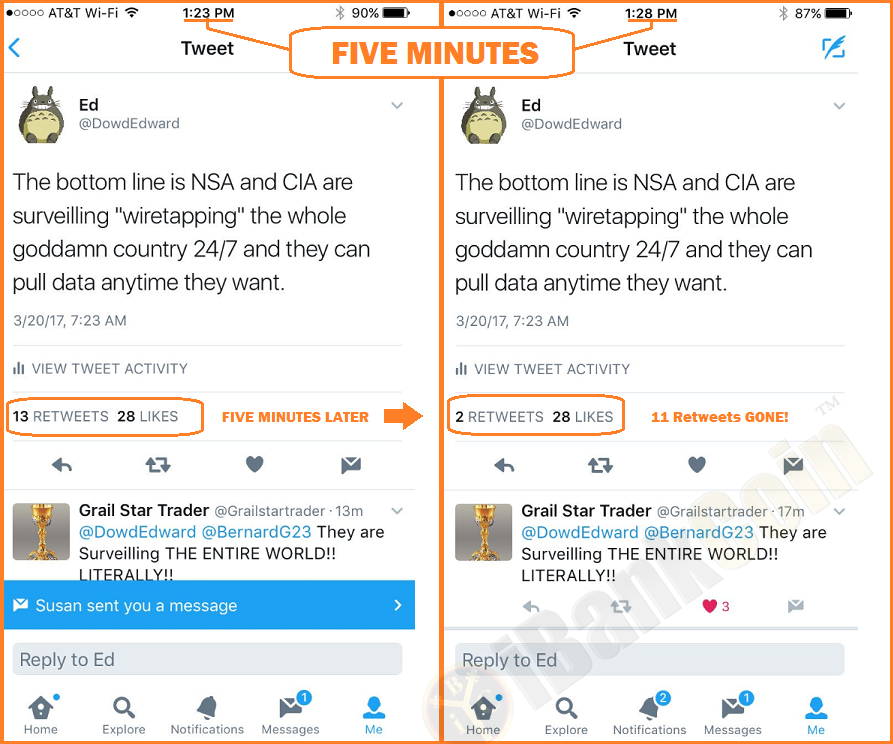 Either eleven people decided to un-retweet Dowd within five minutes of each other, or Twitter decided to censor a tweet critical of the government by limiting it's visibility. Thousands, possibly even hundreds of thousands of people connected to the eleven un-retweeted people were no longer able to see Dowd's tweet.

About three hours later the tweet was up to 44 likes, and the retweets had climbed from 2 back to 12. Time for another screenshot...

A little over an hour later, Dowd's tweet had once again been manipulated - dropping from 12 retweets to 6. Now it's at 7.

Twitter suppression algos still un-retweeting your retweets.Notice my iPhone time at top of screenshots. 12 to 6 in about an hour. #nsa #cia pic.twitter.com/JipofpmwNN

While Twitter is a public company free to censor their own users, one wonders at what point the platform might be considered a public good, subject to the 1st amendment? After all, Social Media has become increasingly integral to human connectivity - not only serving to enhance casual communication, but also as an incredibly powerful tool which can reveal and disseminate truth on a massive scale.

For example, the sheer volume of the information made available in 2016 by Wikileaks was astounding. There was no table of contents - just raw emails. The symbiosis of investigative efforts between message boards like Reddit and 4chan would have just rattled around in their respective echo chambers were it not for Twitter and Facebook serving as lightning fast conduits for information to jump out of the "hive mind" and into the mainstream knowledgebase - "red pilling" any and all seeking the truth. In short, the free flow of information is why Donald Trump is President - while the technocratic left have been decimated by their own inventions. This is why the MSM is fighting tooth and nail to brand and censor anything outside of the mainstream narrative as "fake news," alongside Social Media platforms which continue to implement methods limiting the free speech of those who don't Obey. For now, however, they have lost control.

Until and unless something is done to allow the free flow of information to thrive on platforms like Twitter, all we can do is try and shed light on the problem until it's reflected in their share price and user base. If nothing changes (or the problem gets worse) - we must either live with types of censorship Ed Dowd, Mike Cernovich, Milo, and countless others have been subject to - or leave for greener yet smaller pastures such as gab.ai in the hopes that as they will continue to remain tolerant of divergent opinions as they grow.