Two Trends That Will Force The Fed To Start Buying Stocks

Authored by John Rubino via DollarCollapse.com,

While the Japanese and Swiss central banks have turned themselves into hedge funds by loading up on equities, the US Fed has stuck to supporting the stock market indirectly, by buying bonds. It’s worked, obviously, with all major US indexes at record highs. But it won’t work going forward, thanks to two gathering trends.

First, the main way bond buying supports equities is by lowering interest rates which, among other things, allows corporations to borrow cheaply and use the proceeds to buy back their own stock. Companies avoid paying dividends on the repurchased stock and the government gets capital gains tax revenue from a bull market. From a short-sighted Keynesian perspective, it’s a win-win.

Alas, this New Age public/private partnership on running out of steam. Interest rates have fallen about as far as they can fall and corporations have borrowed about as much as they can borrow. So the buyback binge is topping:

A longer-term but potentially much bigger problem for equities can be found in the structure of US retirement savings accounts. At age 70, holders of IRAs are required to start cashing them out, and as the number of Boomer retirees soars the size of these required sales will rise commensurately. Here’s a snippet from a longer analysis by Economica’s Chirs Hamilton. The full article is here.

Simply put, investing for the long term had it’s time but that time is drawing to a close. The math is pretty easy…we’ll have too many sellers and too few buyers. Why? At age 70.5 years old, retirees are mandated by force of law to sell tax deferred assets accumulated over their lifetime and do so in a 15 year period. Conversely, buyers, incented by tax deferral (but not forced to buy by law), generally have a 35yr window of accumulation. Over the past 65 years (on a population basis), there were three new buyers for every new seller. Over the next 25 years (on a population basis), there will be three new sellers for every new buyer. 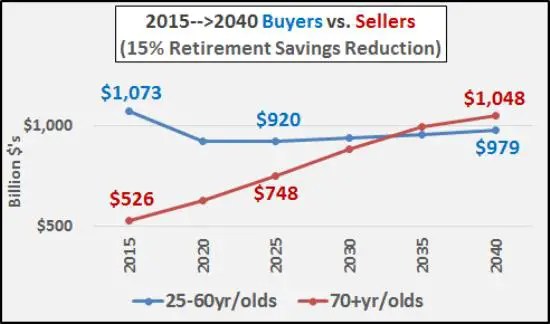 In the next downturn, corporations will stop buying — as they always do at bottoms — and retirees will be forced by both necessity and law to liquidate some of their nest eggs. Combined, these sales will put unacceptable downward pressure on stock prices, leading to the kinds of instability that over-leveraged systems can’t handle.

The Fed – and probably the ECB – will then join the BOJ and SNB in buying equities. Like QE and the other recent monetary experiments, this might be seen by mainstream economists as a good thing. But it’s not. For at least three reasons why it’s not, see We’re All Hedge Funds Now, Part 4: Central Banks Become World’s Biggest Stock Speculators for at least three reasons why it will make a bad situation infinitely worse.