Responding to Trump's unexpected military attack on Syria in which 59 cruise missiles were launched (of which only 23 allegedly hit their target), Russian President Vladimir Putin "regards the strikes as aggression against a sovereign nation,” his spokesman Dmitry Peskov said, noting that the president believes the strikes were carried out “in violation of international law, and also under an invented pretext.”

The Kremlin spokesman insisted that “the Syrian army doesn’t have chemical weapons,” saying this had been “observed and confirmed by the Organization for the Prohibition of Chemical Weapons, a special UN unit.”

The Russian president said he sees the US missile strikes as an attempt to distract attention from civilian casualties in Iraq, Peskov added.

“This step deals significant damage to US-Russian ties, which are already in a deplorable state,” Peskov said and added that the US has been ignoring the use of chemical weapons by terrorists and this is dramatically aggravating the situation, in Putin’s opinion.

Other Russians took the opportunity to opine as well, led by Russian foreign minister Sergey Lavrov who said the US missile attack on a Syrian airbase is an act of aggression under a far-fetched pretext and is reminiscent of the 2003 invasion of Iraq.

Quoted by Tass, the top Russian diplomat said "It is an act of aggression under a completely far-fetched pretext. This is reminiscent of the situation in 2003, when the US and the UK, along with some of their allies, invaded Iraq without the consent of the UN Security Council and in violation of international law."

"When speaking about the military intervention in Iraq many years after it happened, Tony Blair (who served as the Prime Minister of the United Kingdom from 1997 to 2007) acknowledged that they had misled everybody," Lavrov emphasized. "Now they did not even bother to provide any facts referring only to photos," he noted. "They indulged in speculations on children’s photos, on evidence provided by various non-governmental organizations, including the so-called White Helmets, which staged various 'incidents' to instigate action against the Syrian government."

Moscow will demand truth of Idlib events, Lavrov stressed. "It is regrettable that all these causes do more harm to the already damaged relations between Russia and the United States. Hope remains that these provocations will not entail irreversible effects," Lavrov said.

Russian lawmakers also took to the microphone on Friday, warning that the U.S. airstrikes in Syria could lead to an escalation of conflict in the Middle East and dash any plans for a U.S.-Russian coalition against terrorism.

“It’s a new round of escalation in the Middle East. These ill-judged, irresponsible actions don’t contribute to global security, security in the Middle East,” Andrei Krasov, the first deputy head of the defense committee in the Russian lower house of parliament, told state news agency RIA. “Other military conflicts, an expansion of military conflicts, are entirely possible,” he added.

Russian Senator Konstantin Kosachev said the airstrikes meant the possibility of a broad antiterror coalition in Syria “bites the dust before it was even born.”

He said the aim of the U.S. strike was to “rubber stamp” responsibility on Mr. Assad’s for the chemical attack in Idlib province on Tuesday. “‘The walls of Trump’ are multiplying. And everything started so well. It’s a real shame,” said a post on the Facebook page of Mr. Kosachev, head of the international relations committee in Russia’s upper house of Parliament.

Another lawmaker, Mikhail Emelyanov, warned against the risk of clashes between Russian and U.S. forces. “The U.S. is being dragged into the war in Syria in the full knowledge that Russia is supporting Syria and our troops are there, which means it’s fraught with direct clashes between Russia and the U.S. and the consequences could be the most serious, even armed clashes and exchanges of strikes,” Mr. Emelyanov told Interfax news agency.

In immediate response, Moscow suspended its memorandum of understanding on flight safety in Syria with the US following the missile strike, calling the attack “a demonstration of force.” The Russian military has supported the Syrian government’s version of the events in Idlib, saying that Damascus attacked an arms depot where chemical weapons had been stockpiled by Islamic State and Al-Nusra Front militants.

“Without bothering to investigate anything, the US went forward with a demonstration of force, a military confrontation with a country that is fighting international terrorism,” the Foreign Ministry’s statement reads.

“Obviously, the cruise missile attack was prepared beforehand. Any expert can tell that the decision to strike was made in Washington before the events in Idlib, which were used as a pretext for a demonstration,” the statement reads.

The Memorandum on air safety was signed in October 2015, after Russia came to Syria to fight international terrorism at the invitation of the country’s government. The document of understanding was designed to prevent possible mishaps between the Russian and US Air Forces operating independently in the region.

Russia’s Foreign Ministry has condemned the attack as an example of the “reckless attitude” that has only worsened “existing world issues” and created a “threat to international security.”

Additionally, according to Tass, in response to the strikes, the Russian frigate Admiral Grigorovich armed with Kalibr cruise missiles will be deployed to the Tartus naval base in Syria. The Russian Black Sea Fleet’s frigate The Admiral Grigorovich, currently on a routine voyage, will enter the Mediterranean later on Friday, a military-diplomatic source in Moscow told TASS, adding that the ship would make a stop at the logistics base in Syria’s port of Tartus.

"The Russian ship armed with cruise missiles Kalibr will visit the logistics base in Tartus, Syria," the source said. 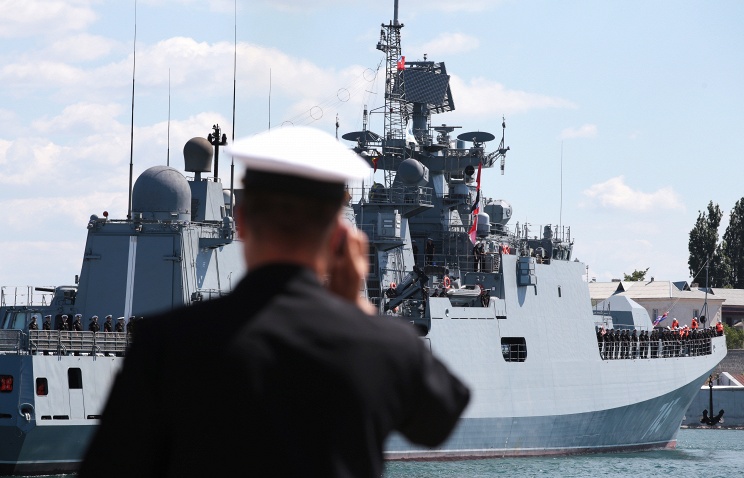 The Admiral Grigorovich is currently near the Black Sea straits. It is scheduled to enter the Mediterranean at about 14:00 Moscow time. The ship left on a voyage after replenishing supplies at Novorossiisk and taking part in a joint exercise with Turkish ships in the Black Sea. Tass's source said the frigate’s presence off Syria’s shores will depend on the situation.