If one needed any more proof that the absurd and discredited 35 page "pissgate" Trump opposition research dossier was Fake News, look no further than Saturday's edition of the New York Times - which revealed an arrangement struck between the FBI and the author of the dossier, former MI6 agent Christopher Steele; $50,000 for "solid corroboration" of his claims.

Steele was apparently unable to produce satisfactory evidence - and was ultimately not paid for his efforts:

Up until now, the dossier has been considered discredited since virtually all of it's wide-ranging claims of financial collusion and lascivious leverage between President Trump, his advisors, and Russia were unproven. Now, however, we know that the FBI had such a low level of confidence in the document that they were unwilling to pay for it.

Where this story takes an even more troublesome turn is the fact that this uncorroborated 'low confidence' document was used as the basis for a FISA warrant against former Trump campaign associate Carter Page - an international financier specializing in Russia's oil and gas markets, and who had a very limited role on a Trump campaign foreign policy advisory committee last March. This means that while the FBI felt the dossier's claims weren't solid enough to pay for, they turned around and used it as evidence of probable cause for a September FISA warrant request to spy on Carter Page (which presumably included 'incidental' surveillance of anyone he spoke with).

So the FBI used 'low confidence' information to fool the FISA court into issuing a Surveillance warrant...

And what exactly were the portions of the discredited dossier used to justify probable cause?

A July 19 memo from Steele’s dossier alleges that the Trump campaign used Page as an intermediary in a “well-developed conspiracy” to help Trump during the election. The source of that claim has since been identified as Sergei Millian, a Belarusian-American businessman who has a history of exaggerating his business ties.

Another July 19 memo from the dossier alleges that Page, a low-level adviser on the campaign who never met Trump, met secretly with Kremlin officials and Igor Sechin, the president of Russian oil giant Rosneft, to discuss relaxing Ukraine-related sanctions against Russia.

Page, an energy consultant, has denied having the secret meeting and says he has never met Sechin. -Daily Caller

So while Page did visit Moscow twice in 2016, Christopher Steele's uncorroborated claims were the foundation for the September FISA warrant.

Furthermore, upon Carter Page's second return from Moscow last December, Trump's attorney, Donald McGahn, wrote Mr. Page a letter requesting that he cease holding himself out as an "advisor" to Mr. Trump - considering the very limited scope of Page's involvement with the Trump campaign: 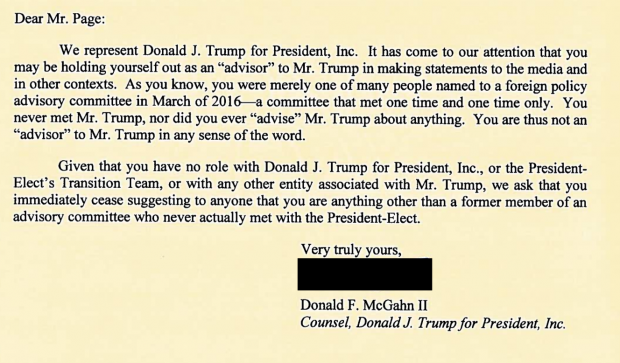 At the end of the day, the FBI needs to answer for why they felt that an unverified dossier which wasn't worth paying for was then used as evidence of probable cause in a FISA warrant request.