Sunday afternoon at a protest in Washington DC, a violent member of Antifa assaulted Rebel Media's Washington Bureau Chief Jack Posobiec, as he attempted to give the alt-left a platform to speak their mind. The assailant was quickly arrested by George Washington University police, and Posobiec is filing charges.

Upon closer inspection of the video, however was clear footage of Antifa organizer Paul 'Luke' Kuhn - who was busted by Project Veritas plotting Butyric acid (stink bomb) attacks at a DC Trump inauguration party. The undercover sting, filmed at the iconic and reputable Comet Ping Pong pizzeria, resulted in the arrest of Kuhn along with two others. As part of his 'deferred sentencing' / probation, Kuhn agreed not to attend future Antifa events - and it looks like he just violated that arrangement...

Is that Luke Khun? If so, he might be violating the terms of his probation by continuing to attend Antifa events in DC pic.twitter.com/rEma4eQ0bb

Want to know a little more about Luke?

As soon as the Veritas video hit, nimble navigators on Reddit and 4chan found solid evidence suggesting DisruptJ20 organizer Luke Kuhn is a strange man. As Disobedient Media also reported, Kuhn made several pedophilic posts to usenet internet groups. One is a defense of sex with young boys "Yes, I did post a few articles to Boychat," and in the other post, Kuhn envisions a child raping Ronald McDonald as a more effective deterrent than E-coli in dissuading children from eating McDonald's. 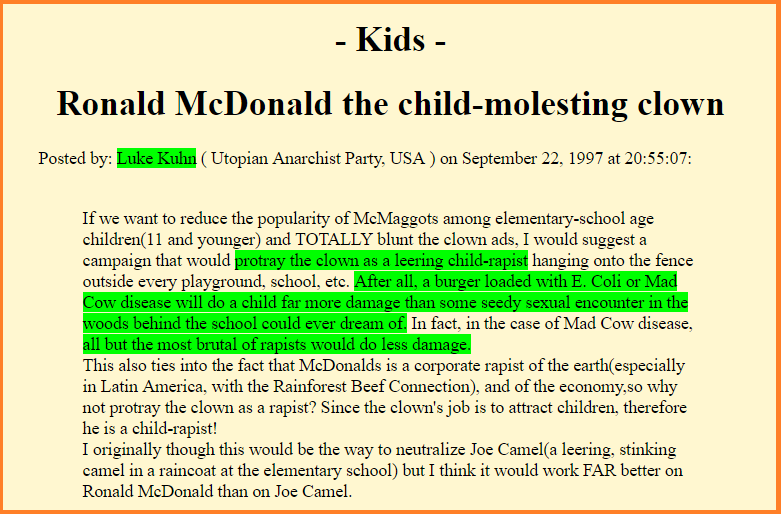 And it seems that in 1998, the "Utopian Anarchist Party" which Kuhn was a big part of began to distance themselves after Kuhn's posts in "chickie-hawk/kid-porn scene" forums. Apparently even liberal anarchists have boundaries.

"DC Indymedia editor Luke Kuhn and Bill White were partners in the UAP from 1996 to 2000. Both were identified as "occasional neo-Nazis" in 1998 for their tactics which included encouraging people to bomb public schools, supporting school shootings, publishing the phone numbers and addresses of private citizens to harass them (which is still a favored Luke Kuhn tactic), and their persistent appeals to young children to run away with them, while Luke Kuhn was advocating that it should be legal for adults to have sex with children."